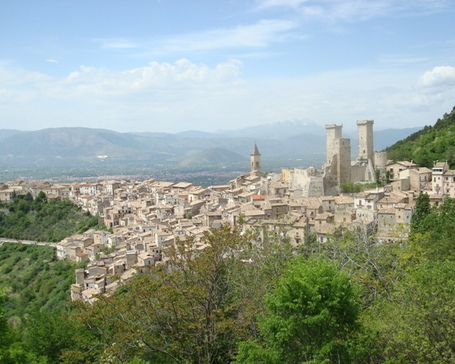 With this stage, the Giro heads into the Appenini, the mountain range that runs down the length of the Italian peninsula. The stage passes passes into the Abruzzo region known for the Fontecchio family, Montepulciano d'Abruzzo vino, and Danilo DiLuca. Also, Dr. Santuccione, but that's another story.

About the bike race. While there are only two categorized climbs on the menu tomorrow, there is barely a flat stretch of road to be found. The first 100 kilometers runs uphill gradually, yet inexorably. There are a series of uncategorized stairstepping climbs that lead to the Colle Galluccio, the first categorized climb of the day. The climb itself is only around six kilometers, but the stage gains more than 800 meters of elevation before it even reaches the bottom of the Colle. Typical Giro, really, there's nothing easy about a stage like this one.

The race passes through l'Aquila, the city destroyed by a massive earthquake several years ago, and after a short descent, it's on to the final climb of the day. The Rocco di Cambio winds at a steady gradient up the mountainside. The road swoops through a series of switchbacks. The climb is never especially steep, and the speed should be high. This is the kind of climb the Italians call pedalabile. That is, you can pedal it.

The Rocco di Cambio climbs around 15 kilometers to its summit. Then, there's a short, twisting descent, before the final punch to the finish. The finish climb is 1.5 kilometers at an average at 5.7%, which is not super steep in the grand scheme of things.

This finish is for the climbers who can sprint. The super climbers won't love the slack gradients and punchy finishing climb. I would not expect gaps among the general classification favorites tomorrow, though it's always possible that someone will get caught out when the road turns up. Liquigas-Cannondale is all-but certain to ride the front on the finishing climb to keep things from getting out of hand.

And what will the Lampre team of the new Maglia Rosa Adriano Malori do tomorrow? It's not an easy call. If they are hoping to put Damiano Cunego into position for a high finish in the general classification, they may not want to work too hard to keep Malori in the jersey. At the same time, Lampre is an Italian team and the publicity of the race leader's jersey is priceless. I say they work.

A break could easily run out the clock in this terrain. The general classification teams like Garmin-Barracuda and Liquigas-Cannondale will want to keep careful watch on who goes up the road. If I'm in the Garmin-Barracuda car, I send someone with that early break. But I'm not in the car, I'm just sitting here in my favorite cafe drinking espresso ristretto and making up words about bike racing. What do I know? Not much of anything, except that I know I will love watching tomorrow's stage. Viva il Giro!