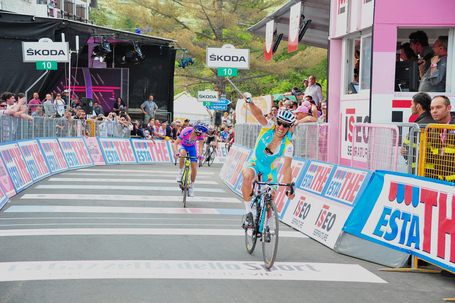 Astana's Paolo Tiralongo alertly caught the accelerating wheel of Lampre's Michele Scarponi on the final ramp to the Giro d'Italia's first hilltop finish, coming around Scarponi in the last few meters for the stage victory. Scarponi left his cautious rivals behind, seeking his first Giro stage, as the road steepened in Rocca di Cambio. The pair got a modest gap and ground their way to the line, with Scarponi leading out the opportunistic Tiralongo for the win. Frank Schleck sprinted for the final time bonus ahead of Joaquim Rodriguez, while Garmin's Ryder Hesjedal finished fifth to become the first Canadian to wear the magia rosa.

A four-rider break provided the entertainment, consisting of Matteo Rabottini, Mirko Selvaggi, Fumiyuki Beppu and Reto Hollenstein. As the race approached L'Aquila, the break fractured into a number of attacks, with Rabottini on the loose for a while. Lampre spent as much time as anyone keeping things under control, but the gap began plunging practically on its own inside the last 30km. Stefano Pirazzi of Colnago was the first to make contact with the leaders, drawing Jose Herrada of Movistar for company, while moves formed from the pack behind. Maglia Rosa Adriano Malori saw his lead slip away, unsurprisingly, as the road and the pace tilted up. PIrazzi and Herrada were finally caught in the final km. 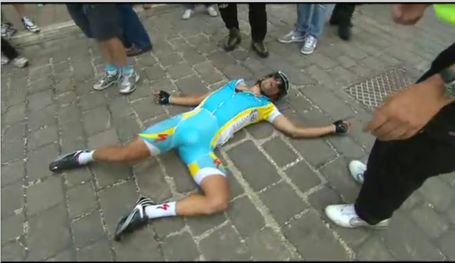 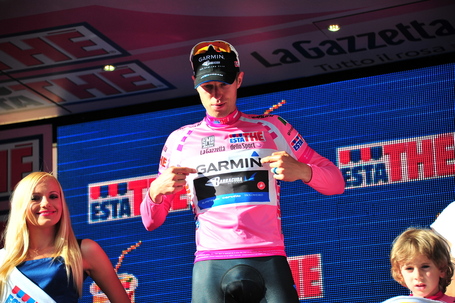