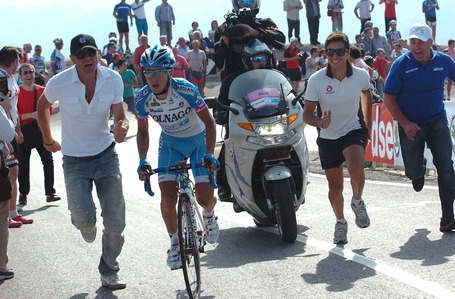 Domenico Pozzovivo of Colnago left the peloton on the slopes of the Colle Molella, the day's final climb, and soloed home to his first career stage win in the Giro d'Italia. The little climber from Policoro, just to the south of today's finish in the Campania region, attacked with 6.9km to go in the stage, and 3km in the climb. Benati Intxausti of Movistar launched an attack from the peloton one km later and stayed away for second place, while the peloton came in seconds later with overall leader Ryder Hesjedal of Garmin in tow. Hesjedal was suffering toward the back when Pozzovivo attacked but recovered and held onto his race lead. Joaquim Rodriguez of Katusha nabbed the last bonus to climb within nine seconds of the Canadian, which will make things interesting in the days to come. Results: