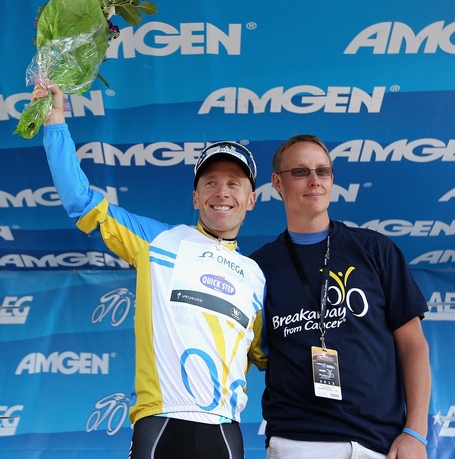 In an odd way races seem to have their symbolic riders, don't they? Ronde van Vlaanderen... Briek Schotte. Paris-Roubaix... Jean Stablinski. Not sure who you could pick for any of the grand tours (TdF... Hinault?), but it's pretty easy to figure out who the face of the Amgen Tour of California is. He's the most decorated winner. Local guy. Headliner at press conferences, even when he might not be riding. Hell, this year, they even included a chunk of Levi's Gran Fondo in stage 1. In these still somewhat formative years of the ATOC, there is no separating out Levi Leipheimer from the festivities.

Unfortunately, Leipheimer's return engagement isn't shaping up as planned. The hometown start was to be a triumphant moment, but an accident with a car left him healing a broken ankle. Friday Leipheimer said he planned to take the start, apparently on the theory that missing out on your hometown race entirely is worse than getting dropped in it. [OK, that's an exaggeration, Levi is a gifted enough climber to hang on in a relatively mellow stage on a mere two weeks of training. But anything more would be superhuman.] Leipheimer rolled into town with a new kit -- the classics giant Omega Pharma Quick Step -- and as famous a teammate as you can have in Tom Boonen. After losing the title two years running it was all teed up for Levi to grab it back when a car plowed into him from behind six weeks ago.

All of this has had me thinking about Levi a lot lately. As an American fan I've long had trouble connecting to the guy, because he seems more interested in winning the Tour of California than the fact that he was on the Tour de France podium once, while I am way more interested in who finishes on the podium of the Tour than who wins the ATOC. Leipheimer's attitude suggests a lack of ambition, if you just react and don't think too much. But on further reflection and knowing only what he says to the press (as opposed to who he is), I think I'm beginning to see something.

Bottom line, his attachment to this race works for him. If the American scene could hurry up and get bigger while the guy has a high-flying year or two left in his legs, Leipheimer might be able to reel off enough top performances to wrap up his career in style. Then, when we go to arrange his place in the country's cycling history, the picture of a world-class athlete winning the races he loves most will be clear.