Giro Stage 10 - Rodriguez Does the Predictable

Share All sharing options for: Giro Stage 10 - Rodriguez Does the Predictable 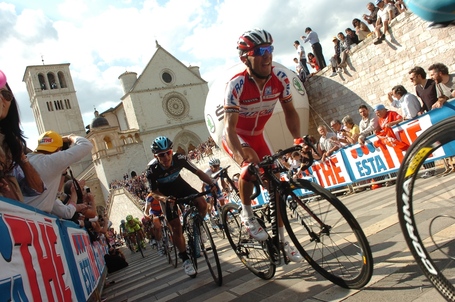 Joaquim Rodriguez won today's stage of the Giro d'Italia by unleashing an incomparable uphill burst in the final 300m of the stage. The diminutive Spaniard also took the maglia rosa off of the shoulders of Ryder Hesjedal, thanks to the 20 second time bonus available on the line.

The stage was lumpy today, though not mountainous, as evidenced by the presence of Mark Cavendish and other sprinters in the peleton with 8 km remaining. The finish, however, was anything but flat. The final climb was 3.8 kilometers long with an average gradient over 8%. Painful already, no? That's before your realize the middle kilometer of the climb is downhill, so to reach the average gradient a large portion of the climb's slopes must be in the double digits. Yes, this seemed perfect for Rodriguez, but he did not win effortlessly...

The day's festivities started off with a breakaway that surely must have known it was doomed - no stage had J-Rod written over it like today's. And with 50 km to go and only 1:50 min advantage, Guillaume Bonnaford (AG2R), Miguel Minguez Ayala (Euskaltel), Francesco Faili (Farnese Vini), Matthias Brändle (NetApp), and Martijn Keizer (Vacansoleil-DCM) surely thought their time in the sun was coming to a close courtesy of the Katusha-led chase behind.

With 32 km to go, Stef Clement of Rabobank decided the breakaway up the road was not doomed enough, so set about closing the gap to it himself. While he eventually made it up to the leading quintet, he acted as a carrot in front of the charging peleton and the group was swallowed up with a little under 10 km to go. The festivities started in earnest here as viewers were treated to the sight of dueling leadout trains, including the all-familiar Sky train of Ian Stannard and Geraint Thomas... except scrawny climbers were the ones bumping elbows behind, not burly sprinters. The fight for position was fierce, especially as Rodriguez and GC leader Ryder Hesjedal - almost the shortest and tallest riders in the field respectively - engaged in a comical tussle for a wheel.

Early attacks went and fizzled on the first ramp of the climb, which maxed out at 15%. As the road tilted downhill and the lead riders looked at each other, Sky's Rigoberto Uran launched a cheeky attack and was joined by AG2R's John Gadret. The descent, it was too gradual and not technical enough to really open up a gap on the attentive Katusha boys, though, and Daniel Moreno led Rodriguez under the red kite as the road tilted up once again.

In the final kilometer, Tom Slagter (Rabobank), Rodriguez, and Bartosz Huzarski (NetApp) distanced the other contenders before J-Rod shot forward past an imploding Slagter to open up a two-second gap on Huzarski and Visconti on the line. Hesjedal crossed the line in 6th place - good for a non-explosive climber - and conceded 6 seconds.

Rodriguez now leads the overall with Hesjedal 17 seconds back and Paolo Tiralongo a further 15 seconds in arrears. Kreuzinger and Basso are the closest of the big favorites for the general classification; both are over 52 seconds behind. 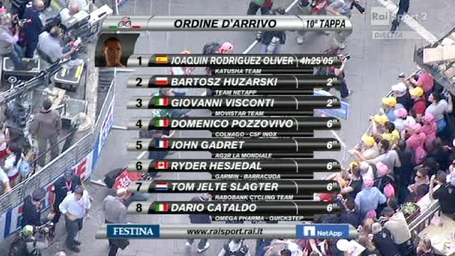 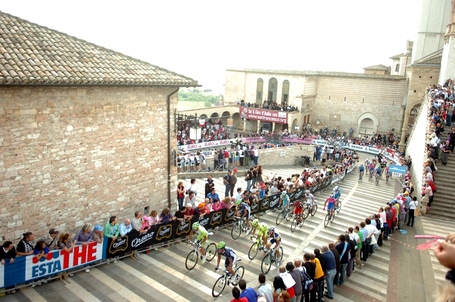