I've been looking a

t some of the difficult decisions countries will have to make when they pick their women's teams for the Olympic road race, and it most cases there will be polemica ahoy! But then we come to Italy, where it's going to be easy - the four-woman team writes itself. The selectors must be rubbing their hands with glee, because not only does this have to be the easiest decision out there, it's also one of the teams that will start as a joint favourite, along with Germany and the Netherlands.

The Italian national teams are something very special. Although their riders are spread around the peloton, when they come together, they can work together like no one else. A win for any of them is seen as a win for all, and they use the most perfect opportunistic tactics, combining solo attacks with beautiful team-work, all of which is why they have won the Road World Championships for the last three years. And it's the current and 2010 World Champion we'll start with. As always, if you have ideas for how else the team can look, let me know in the comments! 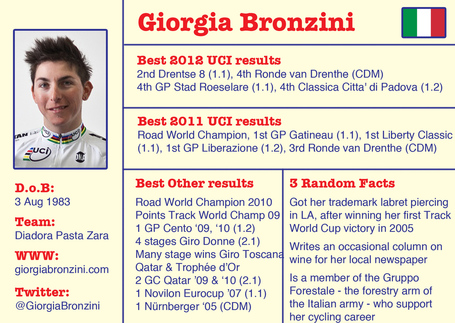 Giorgia Bronzini is such an interesting rider. You can guarantee she'll be on the podium in races all year in second and third spots, but at first glance, it can seem like wins don't come easily to her - until you realise that with Bronzini, it's all about reserving her top form for the races that matter, which is why at 28, she has four rainbow jerseys to her name, having won the points race in both the junior and elite Track World Championships and well as the last two Road Worlds.

I have to admit, even though I'm a massive Bronzini fangirl, I hadn't expected her to win in 2010 before the race. She's always been a sprinter who can make it over the short, sharp hills, but while her team-mates Tatiana Guderzo and Noemi Cantele were attacking like crazy in Geelong, I didn't even notice Bronzini in the race.... until suddenly there she was on the final lap, tucked in behind Emma Johansson, invisible until she made the perfect sideways move to overtake Johansson and an exhausted Marianne Vos - just watch the video! It's that skill Óscar Freire was known for - suddenly shrugging off the invisibility cloak to steal the win - and like Freire, you'll also see Bronzini popping up in places where sprinters are not expected, like a breakaway in the hilly & cobbley Ronde van Drenthe, and attacking at odd times.

Her 2010 win was an emotional one for her and the team - dedicated to the memory of Franco Ballerini, and to Marina Romoli, who's still in a wheelchair after she was hit by a car in training earlier in 2010. I love the photos of the team with "Marina go" on their gloves - and Bronzini's heart-shaped salute as she won. Bronzini's 2011 win in Copenhagen just cemented the Italian team's reputation as the ones to beat, and the Olympic course should be another good one for her. Her only problem is how badly she was hurt in her crash in the last stage of the Festival Luxembourgeois Elsy Jacobs - a dislocated shoulder can be nasty - but assuming everything is fine, watch out for her! Will we see her in her lucky yellow undershirt, sprinting to add an Olympic gold to her rainbow collection?

So who do I think will be joining her? Well, let's cast our minds back to the 2009 Worlds 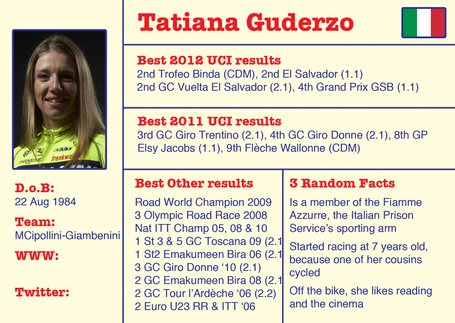 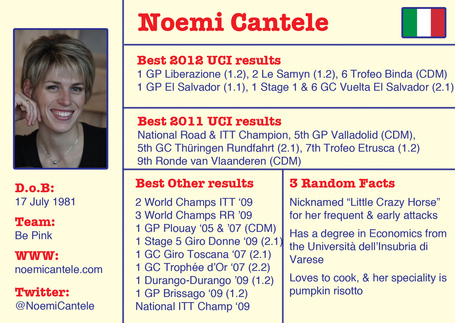 This was such a beautiful example of one of the hardest things there is to do in pro cycling - how to beat Marianne Vos. By the time the race hit the final lap, there were four riders out ahead: Vos, the USA's Kristin Armstrong, Noemi Cantele and Tatiana Guderzo. The two Italians had the advantage of numbers, but the fact they didn't seem to care which one of them won, as long as she was in blue, gave them something special. They took it in turns to attack, grinding Vos down, until Guderzo was finally able to get away, with Cantele behind her continuing the Vos-harassment and frustrating her chase attempts. Guderzo won by 19 seconds, and Cantele added a bronze medal to the silver she'd already won in the ITT, making it an amazingly successful week. Relive the race by watching the video, in part 1, part 2, & part 3.

That selfless work and continual attacking is typical of Cantele, who has said in interviews that her biggest achievements last year were winning the Raod & ITT National Championships, and Bronzini winning the Worlds. Her attacking in the final stages, disrupting the formation of the sprint trains and making the Dutch and Germans scramble to chase her down was perfect Cantele riding! I did enjoy watching her race for the big teams like HTC-Highroad and Garmin-Cervélo, but I can't wait to see what she does this year, when she's the sole captain of BePink and riding just for herself.... and at the Olympics, she could use those attack skills to get away alone and steal the win from the sprinters! 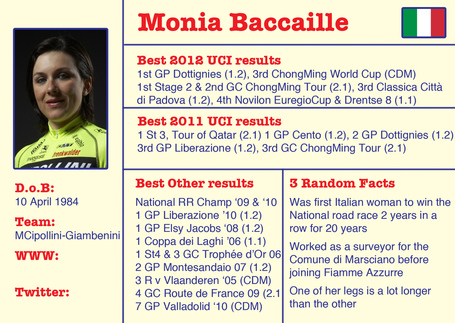 The final riders for the team really should be Monia Baccaille. Baccaille is a sprinter in her own right, but was instrumental in Bronzini's 2011 Worlds win, taking on the role of lead-out woman while Cantele was frustrating the others. Baccaille had an excellent week in China, winning Stage 2 of the ChongMing Island stage race and coming third in the World Cup. She can win and ride for others too - what more could you want?

I've said this before, but it's a real sign of how competitive Italian women's cycling is that Baccaille was the first rider to win the national road race title 2 years in a row since Maria Canins ("the flying Mother") won it 1987, '88 and '89. It's also interesting to see how many of the women are supported through national bodies - Baccaille and Guderzo are part of Fiamme Azzurre, the Italian police and prison service, and Bronzini is funded through Gruppo Sportivo Forestale, a part of the Army. These don't just support their sporting lives, they also give them a stable career, so even though the women don't get the same pay as the men (by a long way) they don't need to worry about how they'll survive after the sport. I like that a lot - and I wonder if that's something that contributes to the national team spirit they have.

So that's my ideal Italian team - but maybe the Italian selectors will disagree? They could, for example, decide that Guderzo's climbing skills won't be needed, as Box Hill can't compare to the mountains she shines in. Yeah, yeah, I know, that's highly unlikely, but the Italians have some good stand-by riders. 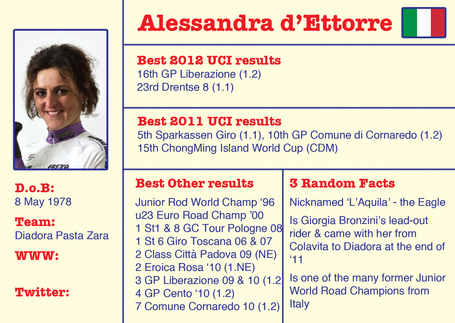 When you look at Alessandra d'Ettorre's palmares, you might wonder why I'm including her, but that's cycling for you, and d'Ettorre is best known as a lead-out rider rather than a sprinter in her own right. Bronzini was so happy with her lead-out that she brought her from Colavita to Diadora-Pasta Zara at the end of 2011. And if they don't go for a lead-out rider? Well I think they could do a lot worse than up-and-coming star Elisa Longo Borghini 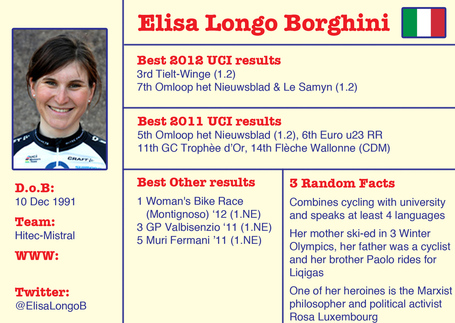 Longo Borghini, nicknamed "Lambo" (Lamborghini) for her speed, comes from a family of sports stars. Her mother, Guidina Dal Sasso, was a cross-country skier who competed in the Winter Olympics three times, her father Ferdinando was a cyclist, and her older brother Paolo has been riding at Liquigas for Ivan Basso. She combines cycling with studying for a degree in Communication Sciences at l'Università dell'Insubria in Varese, where Cantele studied as well, and says that if she hadn't become a cyclist, she would have studied Linguistics and Asian Languages.

Longo Borghini is just one of a generation of young Italian riders who are looking very promising - and by the time we get to the Rio Olympics in 2016, the should be just as strong. Their under 23s have 2 Junior World Champions in Elenora Patuzzo and Rossella Callovi, and with Valentina Scandolara, Susanna Zorzi and Rossella Ratto, it's feels like we'll be talking them up even more in four years time!

To find out more about the Olympic races see my article on the rules - and my pieces on the potential riders in the Australian, USA and British teams. For more information on the riders featured here:

Next up - the hardest task in women's cycling - deciding the Dutch team!