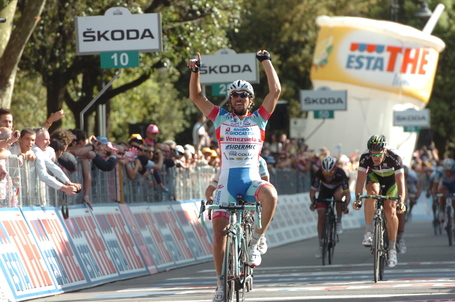 At 255km, today was the longest stage of the Giro. The day's obligatory break was never given much leash to play with. At 95km to go, the gap was just over a minute. 20 kilometers later, it was 2:30, and then with 40km to go it was back down to a minute. The peleton - definitely playing with the break today. So eeeeevil.

With 30km to go and the catch imminent, Manuele Boaro - oft hailed as an up-and-coming Fabian Cancellara - decided to ditch his breakaway companions and fly solo. Adrian Saez tried to follow but could not match the Italian's burst of speed. Within a short period of time, Boaro had a minute again on the chasing peleton and 36 seconds on Saez. This escapade, however, was to be brief.

As the race hit the final climb - a category 4 lump summiting with 12 kilometers to go - Liquigas upped the pace. In predictable fashion, Giovanni Visconti attacked, bringing three riders with him. The chase behind was spirited, though, led first by Liquigas and then by a number of riders trying to jump across the gap. Off the descent and with 8km to go, it was gruppo compatto and Sky had six riders lined up on the front, Cavendish sitting pretty at the back of the line of black and white jerseys. From then on, the outcome seemed certain.

But the Sky leadout, it failed to nail the final turn. But a few people did, notably Thomas Vaitkus, who was second wheel going into the turn and first coming out with a healthy gap. Nice riding by Vaitkus, who is most certainly not a sprinter but apparently studied the road book closely. Unfortunately, Ferrari went through the turn almost equally well and was able to jump by the Lithuanian and win the long long loooong sprint easily. Cavendish, who was gapped in the corner, seemed to struggle with the uphill drag to the line and finished fourth. Francesco Chicci of Omega Pharma - Quickstep was the fastest in the final 150m, but coming from a long way back he had no hope of challenging Ferrari.

Overall standings remain the same with Joaquim Rodriguez in the maglia rosa.