A Day At the Processo Al Giro di California

Share All sharing options for: A Day At the Processo Al Giro di California 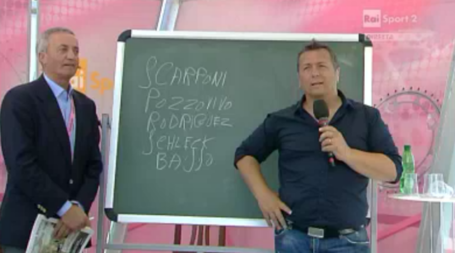 Every day of the Giro offers at least an hour of joy, much more if you catch both ends of the RAI broadcast, and that's not counting the race. There is so much to love about the Processo alla Tappa, mostly having to do with

the fun, wacky and charming nature of Italian TV. Cycling itself brings out its share of stars and characters, and with a good chunk of time to work with, the result is magic.

Why can't we have our own Processo at the Amgen Tour of California? Yes, American sports TV has its positive attributes, especially if you like the facts, but it's California, forgodsakes! If you can't have fun in the west coast sun, where can you? A real Processo would have so many possibilities. So many possibilities...

Phil Liggett: Good afternoon and welcome to our post-stage coverage of the Amgen Tour of California, where we just witnessed Peter Sagan win his third stage in a row, increasing his overall lead to 21 seconds. I'm here with Paul Sherwen, as always...

Phil: and our panel of experts to talk through today's events. Let's go first to our mobile reporter Andy Hampsten, who is with runner-up Heinrich Haussler. Andy?

Andy Hampsten: Thanks guys. Heinrich, it looked like you were in good position but you started your sprint early. Do you feel ashamed?

Heinrich Haussler: Yes, I do. I let my teammates down today. I really wanted to do well. I gave it my all, but Sagan was a little stronger.

Haussler: Yes they were. It was a special day for me, because it is the 30th birthday of my cousin Tommy on my mother's side, so I wanted to win it for him, for my aunt, and for my mother. I am happy I came close, but wish I could have done better.

Liggett: Anyone else have a question for Heinrich? Heidi?

Heidi Klum: Hi Andy, Hi Heinrich. Heinrich, with Sagan holding the overall lead, you are wearing the sprinters' jersey that doesn't even match itself color-wise, let alone your team Garmin-Barracuda shorts or bike. Are you anxious for Sagan to lose the overall lead so he has to wear this awful jersey, or would you still prefer to win the competition?

Haussler: Well, it is an honor to wear the ugly sprinters' jersey, and I want to win a stage, so I am content to keep it for now.

Liggett: Thanks Heinrich, please say hello to your family from us. Thanks Andy. Joining us in studio now is today's winner, Peter Sagan of Liquigas. Peter, (speaking Slovak) your win today good?

Interpreter (in Slovak): Peter, were you satisfied with your win today, coming from so far back in a tough, disorganized sprint and at the end of a long stage?

Sagan (in English): Yes, it was a hard stage so I didn't have great energy at the end. But I picked my line carefully after Heinrich made his jump, and was fortunate to have enough speed left to get the win.

Liggett: Some people call you the Terminator because of your very convincing victories. Today we have the original Terminator, former governor Arnold Schwartzenegger. Let's bring him in...

Liggett: Governor, your character in the Terminator left little doubt in his victims that they would be killed. Do you think Peter has the same effect on his cycling rivals.

Schwartzenegger: Oh for sure ja. If he were Sarah Connor's son, then the machines would not have had a chance in Terminator 3: Rise of the Machines.

Liggett: Peter? Do you think you are the new Terminator of cycling?

Sagan: I was not born when this movie was made, I have not seen it yet. But every day I do my best to improve so I can repay the faith my team has shown in me.

Liggett: Governor, do you have any more questions?

Schwartzenegger: Ja, to my friend Heidi Klum, (in German) we are having a party at my mansion in Brentwood later. I have had sausage sent from Vienna in your honor.

Klum (in German): No thanks. I know what steroids can do to men. (Switching to English) Peter, people said you are a sprinter when you first arrived. How do you feel about your climbing?

Sagan: I try to improve my climbing every day because I know it can lead to many more wins. My coaches have a very careful program for me and I must watch what I eat to keep my weight down.

Liggett: Lance, you said at the 2010 Tour Down Under to watch out for this Slovenian kid, referring to Sagan. He's actually Slovakian. Did you mean to insult him?

Armstrong: No, I did not. I was playing a joke on Janez Brajkovic.

Liggett: Peter, were you hurt by that remark?

Sagan: My teammates have stood by me in this race and I am just happy to win so I can pay them back for their efforts.

Liggett: Well said. Lance, as a special thanks for your joining us today, the people at NBC Universal Sports have put together this tribute video to your career. Californiabecco, if you could please start the video machine.

Liggett: That was truly special, for a special rider. What do you think Governor?

Liggett: OK, let's turn to tomorrow's stage. With his chalkboard our guest analyst Justin Timberlake will give us his predictions for Stage 4...

Thank you to the good people of Italy for making me wonder how much fun I'd be having if my great grandparents had stayed put. [Picturing a Vito Taccone poster in my room next to the DiLuca one...] Maybe some things are best left in their original form.