Giro d'Italia: On the Scene in Assisi for Stage 10

Share All sharing options for: Giro d'Italia: On the Scene in Assisi for Stage 10 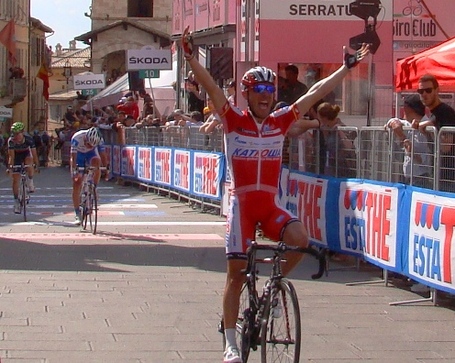 I don't generally mix it up with the finish-line photogs, since I have neither the skills nor the equipment for great action shots, and I don't want to get in the way of the guys making their living with these shots. In Assisi, however, there was room to stand behind the first line of photographers, who all go down on one knee, so I figured, why not?

It was exciting being so close to the finish, and seeking Rodriguez's celebration as he crossed the line.

I met some fellow Giro enthusiasts at my hotel in Assisi, and one of them, Walt Kowal, took this photo of J-Rod in full sprint just before he crossed the finish line. 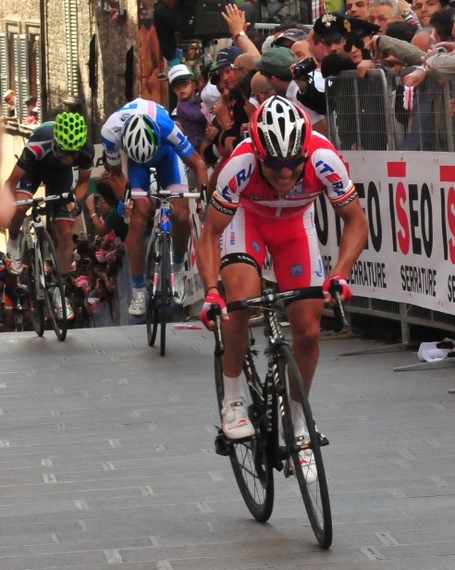 J-Rod crosses the finish line with Huzarski and Visconti in hot pursuit: 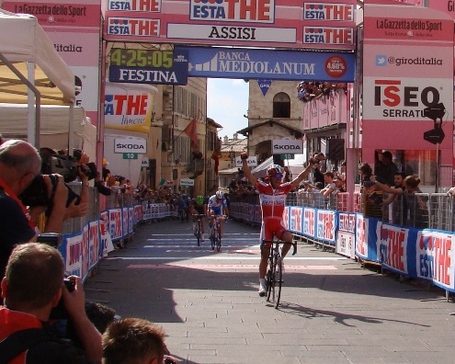 Visconti does an interview after his third-place finish: 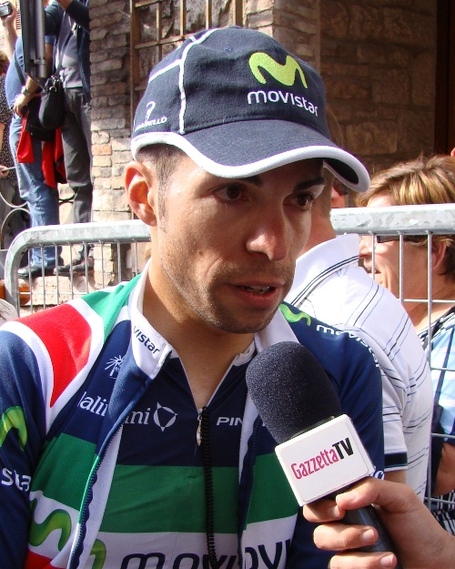 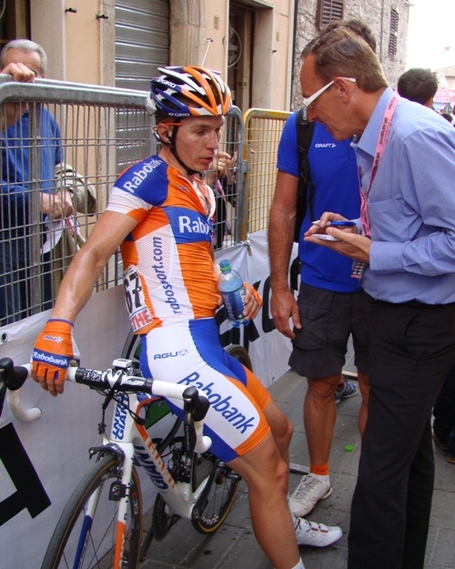 Ryder Hesjedal lost the maglia rosa on bonus points, but seemed happy with his high placing on the stage: 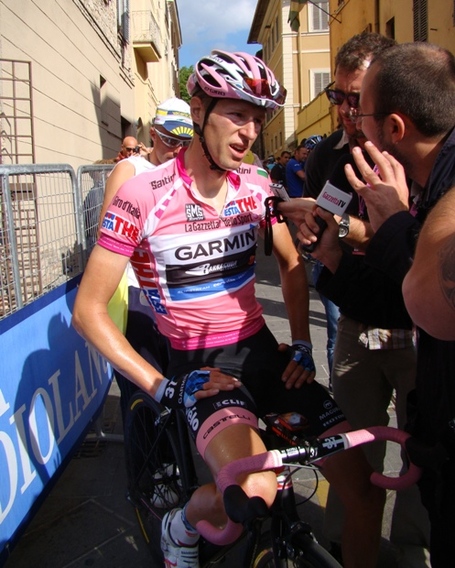 Tomas Vaitkus patted Diego Ulissi on the back after they finished together, 1:13 behind the winner: 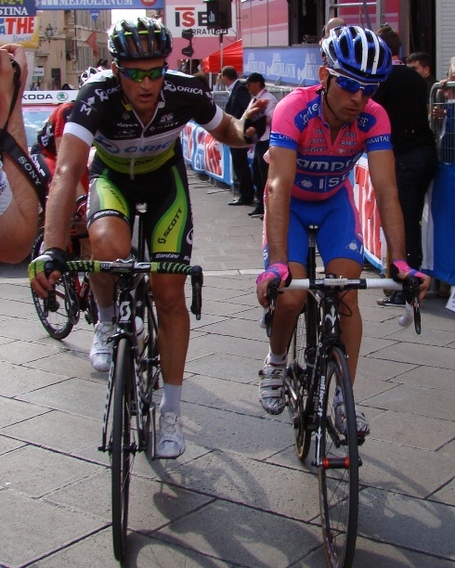 Cavendish obliged the press with a few interviews: 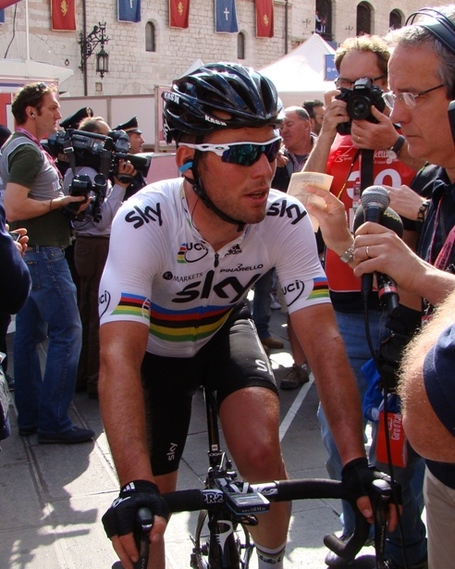 Damiano Caruso makes his way to the podium stage to collect another maglia bianca: 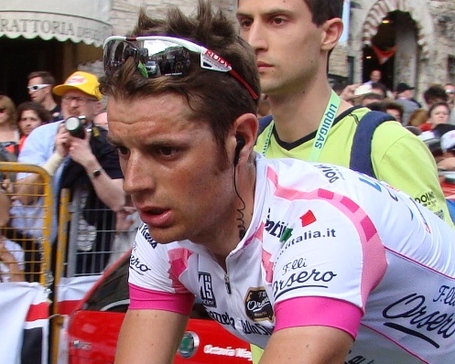 On the podium, Rodriguez looked a lot happier than the day's podium tot. Maybe someone told the little girl it would be less scary if she focused on just one person, because she stared at me the whole time she was up there, but didn't react when I smiled and waved at her. 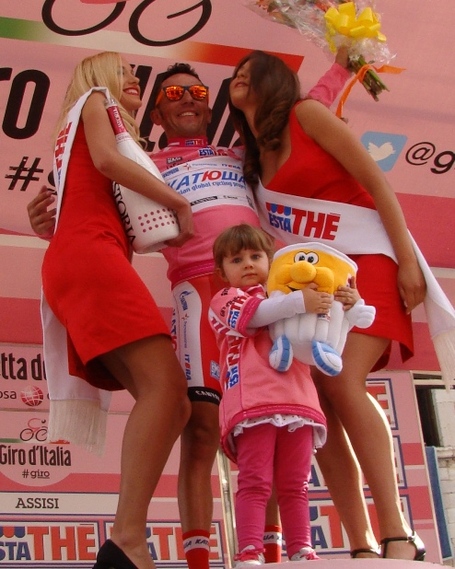 Up at the press headquarters, I heard Rodriguez was walking to the press conference, since they couldn't get a car down the narrow, pedestrian-only street up from the finish area. So, I waited outside on the steps to the building, and caught J-Rod eating some pasta as he walked up. 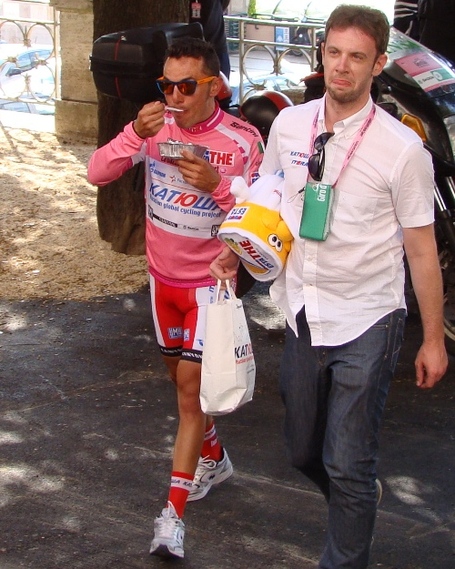 He was quite a sight with his podium-girl kiss print and the psychedelic effect of the stairs reflected in his sunglasses. 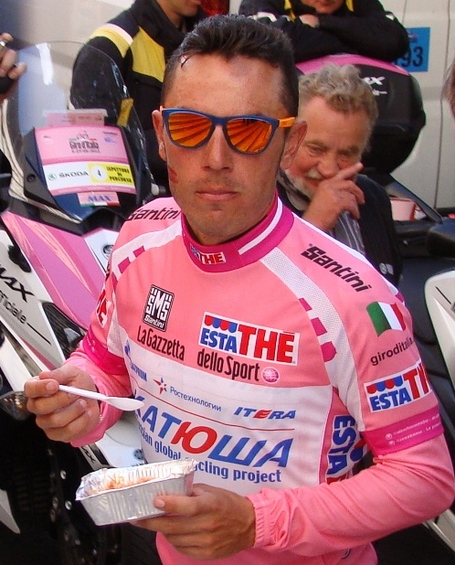 Finishing sprint photo by Walt Kowal, used with permission. All other photos by Susie Hartigan.