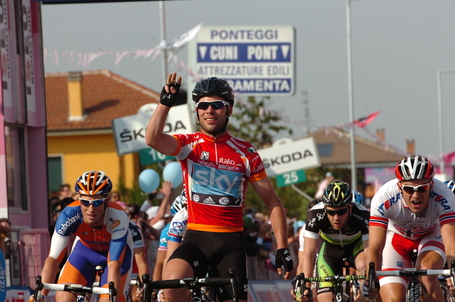 Mark Cavendish won the 13th stage of the Giro d'Italia in a bunch gallop into the town of Cervere. A group of three riders tried to disrupt the sprinters' plans by jumping away on a rise six kilometers from the finish, but their escape was short lived. Behind, Sky, Saxo Bank, and Orica-Green Edge played dueling leadout trains. Sky's looked the best and wrested control with 3km to go but was swamped in the final 600m. Matthew Goss seemed to have the best shot at the line in the final 300m but jumped too soon, allowing Cavendish to come around alongside the barriers in the final 100m to win comfortably.

Today was a pedestrian affair for the most part. While the stage was short - and therefore might provoke some fireworks - it was flat and the sprinters knew it was one of their last chances. So, a breakaway of only two riders - Martijn Keizer (Vacansoleil) and Francesco Failli (Farnese Vini) - was left out to dry for quite a while and were reeled in at just under 30 kilometers to go. The most exciting part of the day came when Bernie Eisel (Sky) dropped to the race caravan and stripped down to remove his undershirt. The RAI camera men even resorted to showing pictures of stationary tractors on the roadside.

Overall standings remain unchanged with Joaquim Rodriguez in the maglia rosa. Mark Cavendish extend his lead in the points classification over Matthew Goss.