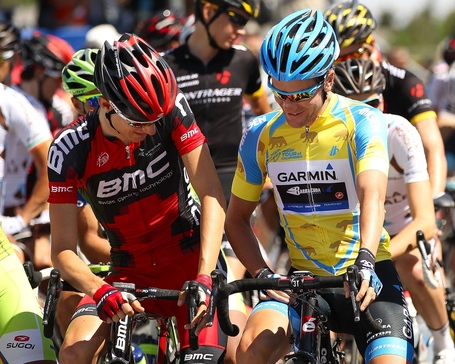 Yesterday we got a good look at who among the conventionally identified contenders actually arrived in the Golden State to win. We also got a very good look at the human missile that is Dave Zabriskie. The only way he could be faster is if he cut some spiral grooves into his body and managed to get his torso and head spinning like a bullet. That would be faster. Until then,... respect.

Unfortunately Zabriskie isn't expected to survive tomorrow's epic climb to Mt. Baldy. Assuming he's still ahead of his rivals after today's meh-ntaintop finish at Big Bear, he should nonetheless have surrendered the virtual lead by the time the race approaches the point of the Baldy climb where Jimbo's pride is buried. Apart from Zabriskie, however, this race is being very tightly contested by a bunch of climbers who can time trial, and all that stands between here and LA is one huge beast of a climb.

Let's run through the contenders... on the flip.

Oh, one side note of amusement. Three LA sports teams are in the throes of their respective playoffs, and they all use the same building -- the Staples Center, home to the finish line on Sunday. If anything can make Los Angelinos take up cycling, it will be the traffic around the Staples Center on Sunday. Also, if your lifelong dream was to acquire an abandoned Bentley, swing by west LA around 5pm and take your pick. Anywho... to the power poll. Offered with an unusually low amount of confidence, I might add.

If all that stands between a tightly packed group of contenders and the finish line is one massive climb, you go with the proven climber. That's Gesink, who has consistently climbed with the big boys of the Tour de France, when healthy enough to do so. If he were fully fit and motivated, this discussion would be over.

But Gesink's entire season will remain under a bit of a cloud until further notice, with respect to his recovery from his terrible broken leg. Yes, his 30-something minutes of effort yesterday, in his least favored discipline, show he has some very good conditioning, I still wonder a bit if he can repeat that three days in a row. If he can, there is no reason he shouldn't put this one away.

Tejay, a former Rabo CT product who got away, looks like a winner-in-the-making. In his third season in the big leagues, he has made steady progress all along the way. Perhaps not ready at age 23 to challenge in a grand tour, but that day draws closer. Having ridden the Tour last year I suspect he's in the team's plans for Cadel's defense, but I almost hope he doesn't get selected -- I'd love to see him at the Vuelta, racing for himself. At their respective peaks I don't think he's Gesink's match as a pure climber, but if Gesink is less than peak tomorrow, Tejay will get it done.

Guessing what will happen next with Velits is almost impossible. He produced a similar result last year in the ATOC time trial, then went nowhere. But with Levi on fumes, Velits finds himself in the improbable position of team leader. Was he preparing for it? Do OPQS want him going full gas now, versus later in the Tour? Is he the guy who finished third on Alpe d'Huez last year? If the answers are yes, yes and yes, his ceiling in this race is "overall winner." At 27, he hasn't developed into a consistent threat in stage races, but maybe nobody at HTC asked him to?

Experience is the issue here. Talansky is a year behind Van Garderen on the big stage, and his resume is missing the big climbing results that TJVG is starting to show. So there's that. But we're talking about who's going to out-perform who(m?) in a single day of racing, and apart from being young there is little to compare between the two American stage racing prospects. Talansky is on fire after his awesome Tour de Romandie. His track record doesn't prove he can win on Baldy, but it doesn't say he can't either. I am more than a little excited now... can we get Lawson Craddock and Luke Durbridge into the early break tomorrow too?

Defo heading to Tier II now. Danielson is a half-minute behind the guys he needs to catch, which isn't much. As I said in the preview, his results suggest he's preparing cautiously for the Tour -- wouldn't you if you bagged your first top ten last year at age 33? But if he and Talansky are both strong tomorrow, here's a fun scenario: Danielson attacks early, throws everyone into chaos, and Talansky gets the armchair ride up to the summit, with a shot at the stage win. [Remind me, are there time bonuses for the MTFs?] Anyway, Danielson is close enough and climber enough to get a win here.

There are another dozen guys theoretically still in play, including Levi (at 1.44), LuLu (at 1.40) and the Shark (at 1.52), but rather than parsing through their incalculable chances, let's just get one more look at the best Nats kit ever: 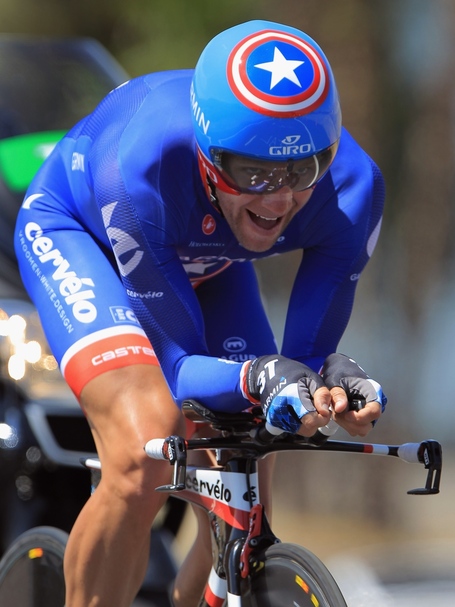