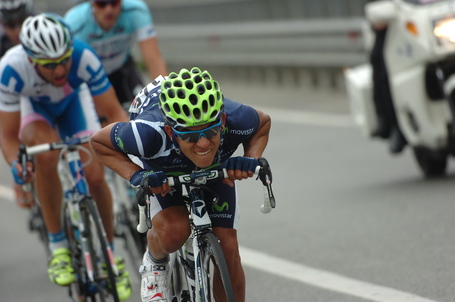 Andrey Amador of Movistar became the first Costa Rican to win a stage of the Giro d'Italia by outsprinting his break-mates Jan Barta of NetApp and Alessandro De Marchi of Androni Gioccatolli, while an attack in the final 3km by Garmin's Ryder Hesjedal regained the Canadian the maglia rosa, by nine seconds over Katusha's Joaquim Rodriguez.

Amador earned the victory with a long-range, 130-km attack, along with seven others, including Barta and DeMarchi. On the final climb of the day to Cervinia near the Swiss and French borders, Amador was alone until caught first by De Marchi and finally by Barta with 5km remaining. The trio stayed together to the line. Behind them the peloton was paced by Liquigas, staying together on the comparatively gentle gradients but steadily reeling in the attackers and keeping the pace high enough to discourage too much action. With 3km to go Jose Rujano tried a move which was tracked down, but Hesjedal countered with a powerful blast and was never seen again. Rodriguez reacted and a gruppetto of favorites formed to chase Hesjedal, to no avail. The 26-second advantage gained by the Canadian was nine more than he needed. Great day for America's neighbors.