L'Eroica! Rabottini Survives to Win; Rodriguez Back In Command

Share All sharing options for: L'Eroica! Rabottini Survives to Win; Rodriguez Back In Command 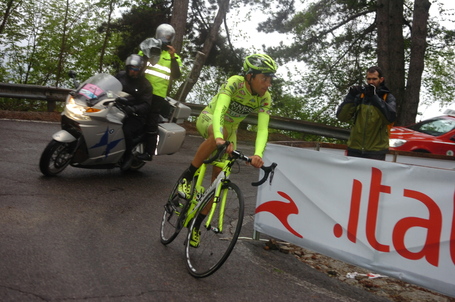 Matteo Rabottini of Farnese VIni stoked the hearts of Giro fans today with a heroic victory at the Piani dei Resinelli, riding alone from 18km to the finish, surrendering his lead to Joaquim Rodriguez in the final kilometer, then grabbing the Katusha climber's wheel for a quick recovery and winning the sprint to the delight of the crowd. Rodriguez had to content himself with retaking the the maglia rosa heading into the final rest day of the Giro, with Ryder Hesjedal of Garmin surrendering 43 seconds.

Today's stage was a modest high-mountain stage from the suburbs of Milan to the hills around Lake Como, topping out at 1280 meters and only 169km in length. Rabottini, who rode alone for much of the stage, summited the day's major climbs in the lead, picked himself off the deck at one point after sliding out in a corner, and managed to survive to the final KM of the race, despite looking exhausted and gritting his teeth grimly for the camera. All day he was chased by a group of well-known (but not too well-placed) riders made a day of it, getting a good four minutes on the pack. They included Damiano Cunego of Lampre, BMC's Marco Pinotti, Movistar's Marzio Bruseghin, Stefano Pirazzi of Colnago, Gustav Larsson of Vacansoleil, yesterday's winner Andrey Amador, Amets Txurruka of Euskaltel, and Emanuele Sella of Androni. Cunego attacked on the descent of the Cumine di Dan Pietro, splitting the chase group, while Liquigas gave the peloton tempo-setting duties over to Astana. As they began the day's final climb, Cunego sat halfway in the 5' gap from the peloton to Rabotiini, with Stefano Pirazzi, Amador, Txurruka and Alberto Losada.

On the final climb, with his lead dropping steadily, Rabottini saw the glory finally slip away as the pack came alive with 2km to go. Michele Scarponi started the action, but couldn't finish it when Joaquim Rodriguez, looking increasingly like a potential Giro winner, launched a counterattack that reeled in the tiring leaders and dropped his rivals. But Rabottini didn't give up when the elite Spaniard came up on him, and while it's possible Rodriguez allowed the win to get away (in exchange for the overall lead and possibly for the sake of his own safety), the fact remains that Rabottini dug deep to latch on to Rodriguez in a burst of truly inspired riding. His victory is a tribute to everyone who goes long in a stage race. With enough grinta, dreams come true. Results: