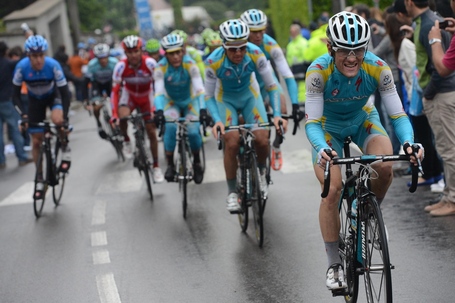 Things have taken enough shape now that we can start ranking the action in the Giro, though without the benefit of any truly testing stages, or not on the level of what we're heading into. The weekend was full of action, but from the contenders' side of things it was more the last-5km-attack kind of stuff. The bigger pieces will fall into place starting tomorrow... or maybe not til Wednesday. Definitely by Friday. So let's start sorting it out. Remember, I called Robert Gesink, so like the broken watch...

Team Strength: A true Giro squad, with hammerheads like Sabatini and Capecchi, along with elite climber domestiques in Agnoli and Szmyd. In fact, the impending Szmackdown is one of my favorite Giro traditions. If De Gaas were Basso, Szmyd and six sprinters, I would still like their chances.

Uphill Outlook: On both the team and individual (Basso) level, it's strong. The Captain is looking like a guy who, in veteran fashion, has his form on the upswing after a quiet beginning. Granted, his experience with the Stelvio is something he'd rather forget (ice water?), but beyond that and into his post-suspension self Basso has shown repeatedly that he can climb well over any pass in Italy, and over three weeks.

Crono Disaster Potential: Low. Just last summer at the Tour Basso finished 3.47 down on a longer course in Grenoble, a mere 47" behind noted cronoman Christian VandeVelde. Two years ago he was just fine in the Verona ITT, nailing down his win by running 15th on the day. 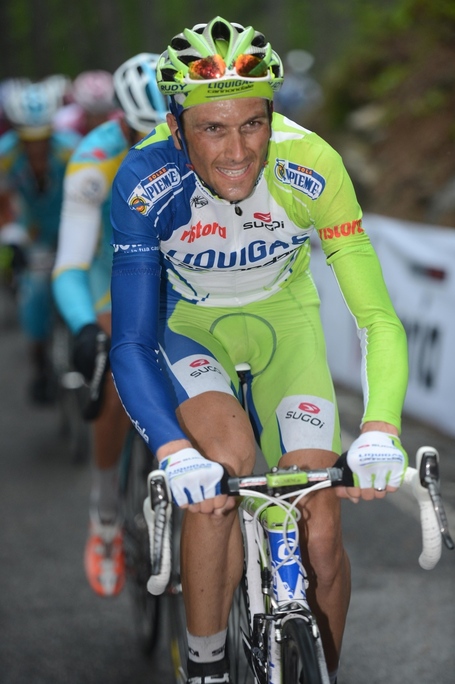 Top Contender: Paolo Tiralongo is at 1.26, Roman Kreuziger a single second behind.

Team Strength: Astana have been utterly fantastic at practically everything since the starting gun sounded at Amstel Gold. Curious that they'd go all in for the Giro the way they have -- who's their captain at the Tour? Jani Briajkovic? More likely it's Kreuz again, but who cares! I love that they sent their A-squad to Italy, and that they're looking so strong. Even top winner Enrico Gasparotto, more of a classics climber, is here and riding well in spots, looking ready for some gregario repayment. Overall they've been quite active as a team. And to think I couldn't come up with a single nice thing to say about them all winter.

Uphill Outlook: Decent... their helpers include real climbers like Seeldraeyers, but in the end it will be up to Tiralongo or Kreuziger to demonstrate that they can survive the world's most brutal weeks. Tiralongo's history is long and shows an occasionally opportunistic climber who won a stage last year and once finished 8th in the Vuelta. Kreuziger's star is diminished from earlier lofty expectations and he can't be counted on to hold the wheel of the climbing specialists on the worst slopes, but he's a steady plugger, limits his losses and has some Rasputin tendencies.

Crono Disaster Potential: Mixed but low. Tiralongo's record is spotty but enough good days to make you think he'll pull out a decent day if something big is on the line. Kreuziger is the best time triallist left in the GC top ten. If Rodriguez (for example) can't shake him in the mountains, Kreuziger will destroy him in Milan.

Team Strength: Obviously the top liner is pretty good. Dani Moreno is as much an elite climber domestique as Szmyd, and even a threat for a result of his own if Rodriguez has a bad day. After that, I think they're not as strong as Astana, mostly from eyeballing things, though it's debatable. Or maybe I just don't like Alberto Losada.

Uphill Outlook: Two-man affair, but it's possible both will survive to the line in the toughest stages. It's one thing to have a team that can control the pace to the final five km, but something else to have a two-man assault all the way home.

Crono Disaster Potential: Massive. It's possible Moreno is actually worse against the watch than J-Rod, though recent results like last year's Vuelta, when both were going for it, put them about equal. -Ly bad.

Team Strength: Not sure what to make of practically anyone but they do have good depth. Obviously Cunego is a threat to light up the entire race... or disappear without a trace. Ulissi will be interesting to watch -- it's his second Giro and he's holding it together well enough so far. Niemiec, Pietropolli and a host of uphill gregari keep them in good shape.

Uphill Outlook: Strong. It remains to see how assertive they care to be -- probably not so much, with Liquigas on the front most days -- but more significant is the possibility of having two contenders and maybe a gregario in there late in the race on the worst days. Cunego's consistency has cost him a few maglie rose, but he seems to rise to the occasion on the biggest days: second and third at Alpe d'Huez, fourth at Zoncolan last year -- at some point this is no fluke. Scarponi is in effect the defending winner of a brutal Giro last year, so there's that too.

Crono Disaster Potential: Minimal. Cunego is quite good in the hilly cronos, but this isn't one of them. Scarponi just does what has to be done.

Team Strength: On depth alone, they could be a few spots higher on this list. Samoilau, Bruseghin, Amador, Herrada, all supporting Intxausti... just one mountain goat after another. The reason they are ranked this low is the lack of Giro experience outside Bruseghin and the fact that Intxausti has never finished higher than 60th in a grand tour. It's still all left to do. But they have looked very frisky.

Uphill Outlook: Like I said, lots of mountain goats. Honestly, though, Samoilau's 13th at Sestriere last year is about the only massive-mountain stage finish of note among them. Well, Bruseghin was fifth at the Block Haus in 2009, but whatev's.

Team Strength: Best of the "Italian" Pro-Conti outfits (including Farnese and the actually Italian Androni here). Brambilla sits in contention at 4.45 and Stefano Pirazzi has shown tremendous fight.

Uphill Outlook: We've been waiting for Pozzovivo, the Giro's oldest pre-teenager, to put it all together since what, 2005? This is as good a chance as he's had, seemingly rolling along OK and heading into the high mountains (where he's shown abiltiy) with nothing holding him back.

Crono Disaster Potential: It's funny scrolling through results and seeing stuff like 18th and 19th in time trials... then realizing those are the team TT results. That says it all. 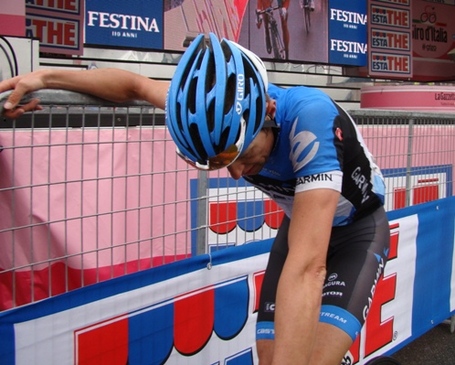 Team Strength: Not bad. Stetina is here to work, and we may see VandeVelde digging deep, not just tuning up for the Tour. Plus Jack Bauer, who has already done a ton of work.

Uphill Outlook: Hesjedal could win the Giro if he were in his top form -- which he can't be far off of. What he can't do is accelerate on the business end of steep climbs the way Rodriguez can. But if Rodriguez does nothing more than a couple last-km accelerations, and if the Mortirolo-Stelvio day turns into an epic sufferfest for all parties, Hesjedal is as capable of grinding out a decent result as the rest of the gang.

Crono Disaster Potential: It exists. Just because he wears the Garmin shirt doesn't mean Hesjedal is an ace against the watch. VandeVelde is better, if somehow he makes up most of his current 10 minute deficit.

Team Strength: Very good on the top end. Besides Gadret, who may just be rounding into form, Dupont is a major mountain climber, but it's more or less a two-man affair. Which is two more than most French teams usually send to Italy.

Uphill Outlook: Dupont has solid results in places like Zoncolan (7th) and Alpe d'Huez (13th). They've been quiet, but not likely to stay that way. Big-time sleeper. 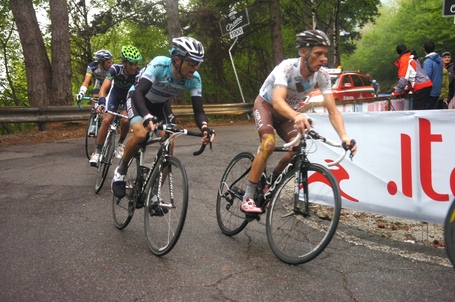 Eight isn't a very round number, but that's where the team effects start to really drop off. I get that Henao and Uran and Cataldo and Casar are all sitting in strong positions, and maybe you could argue about Sky versus AG2R for the best of the rest of the two-man teams. [But much of Sky is in the service of Cavendish and his upcoming struggles, so there.]