FSA DS: Big Payday Coming Sunday... Are You In Line?

Share All sharing options for: FSA DS: Big Payday Coming Sunday... Are You In Line? 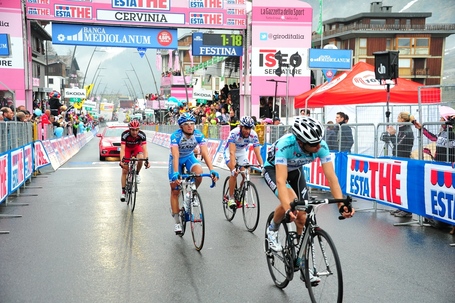 The secret to success in the FSA DS competition really isn't much of a secret: get as much value as possible for every point you spend. Since you have 6 points to spend on average per rider, value comes in a few forms: getting big returns on your high-dollar guys, hitting the jackpot on some middle-value dudes, and garnering as many unexpected points as possible from your low-cost roster fillers. The former two places, you're not likely to be alone. Joaquim Rodriguez is on 98 teams; Tom Boonen is on 380. So to win you need to not have missed those boats.

Where you get separation is in the lower point scores. This week the Giro d'Italia hands out one of the three Cat-1 point jackpots of the season, and at least compared to its big brother in France, the points getting doled out this week are far less predictable... and present one of the two biggest opportunities of the year (with the Vuelta) to make your mark.

What are your chances? On the flip...

Your current top 20 on GC, and their FSA DS price and popularity:

This list leaves out a few distant sleepers like Jose Rujano (2 pts, 22 teams) and Christian VandeVelde (4 pts, 77 teams) but whatever. It's possible to organize these riders' potential results into a few categories of importance -- and by importance I mean both the payoff to you and the uniqueness of that score:

"You'd better win, punk": These are the guys whose Giro success you paid for up front and expect a return on, pronto. Victory won't even taste all that sweet, at least in the case of Scarponi, the expensive one; it's more the chance to avoid bitter failure that you care about at the moment. Basso, Cunego and Scarponi, the three ex-victors, are really the only guys solidly in this column. A decent finish from Dani Moreno or Uran might fit in here too, thanks to their cost.

"Yay, I guess": The guys who would surprise you a bit, pleasantly, with a big score, but it won't really do you much good. Victory by Purito; high finishes by Uran, Hesjedal, Kreuziger, Henao, De Gendt, Gadret and Nieve. All of these would be solid results, but you'd be sharing them with several of your friends. A podium from Moreno might fit here too, given the cost. Even though only six teams went that way; the other 994 teams have their own 12-point potential headaches to cure.

"Like, Whoa!": These are the scenarios where you would be feeling quite impressed with yourself, if not quite ready to count the money. Victory by any of the Uran - Hesjedal - Kreuziger - Henao - De Gendt - Gadret - Nieve group would maybe not get you complete separation, but you'd still be leaving an awful lot of teams behind. Victory by Moreno would pay the freight and put you practically on your own. Anything of significance from Tschopp or Casar would be pretty sweet. Same with a high finish from Intxausti.

Terry Tate Dance Time: If any of these guys give you a big points haul, you will find yourself standing over prone, terrified competitors screaming "ARE YOU READY FOR THE PAIN TRAIN??" Let's go thru them more slowly, since they have the potential to really make a dent.