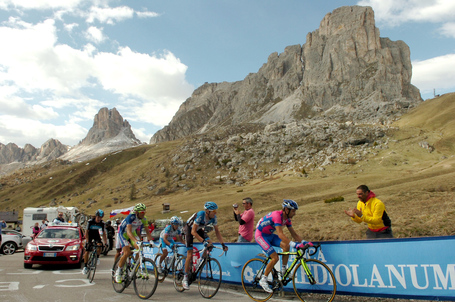 Current maglia rosa Joaquim Rodriguez of Katusha outsprinted an elite six-man gruppetto of overall favorites in Cortina d'Ampezzo for the victory in the second major mountain stage of the Giro d'Italia. The group contained Ivan Basso of Liquigas, Ryder Hesjedal of Garmin, Sky's Rigoberto Uran, little Domenico Pozzovivo of Colnago, and the embattled Michele Scarponi of Lampre, all rolling in together with Basso and Hesjedal trailing behind Purito in the sprint.

The group formed almost as soon as the Passo Giau, last of the four major climbs, began. Prior to that a peloton of climbers had stayed mostly intact, minus Roman Kreuziger of Astana. The six stayed intact until Scarponi lost the thread just before the summit of the Giau, then cramped on the descent and fell 25" behind before regaining his composure and the leaders. Rigoberto Uran also lost contact late in the Giau before rejoining the front group with 5km to go, while a group of secondary favorites led by Damiano Cunego chased going up and down the beastly Dolomite pass a minute or so back. Entering Cortina, Basso attempted to get away, but otherwise it was left to a sprint from 250 meters, which Rodriguez won handily over his two closest rivals.

No time bonuses, so the Bigs stay in the same time positions, mostly just minus all trace of Astana: