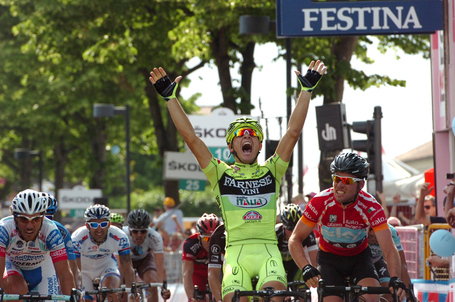 Andrea Guardini served notice to the sprinting world by doing something few have done: beating Mark Cavendish straight up in a sprint. The Farnese Vini fastman started his sprint two places behind Cav, with Roberto Ferrari in between, and simply cranked up more speed than anyone else, even the world champion. There were no flying bodies, no closed doors, no tactical excuses. Guardini had the speed and Cav did not.

The Giro d'Italia took a break from the mountains today, heading downhill much of the day from San Vito di Cadore to Vedelago, outside Treviso, the provincial capital of the Veneto region. No breakaways made any serious headway in the stage that seemed ticketed for a sprint from the day it was drawn up, and Team Sky (with help from maglia rosa defenders Katusha) made sure the plans didn't change. Saxo Bank started the wind-up putting their entire squad on the front for Lucas Haedo at 3km to go. But Sky simply waited for Saxo to spin themselves out before hopping on the front for the last km.

No effect on GC today. Cavendish extended his one-point lead coming in over Joaquim Rodriguez in the maglia rossa competition (Guardini is nowhere to be found there). Now all that's left for the sprinters is to hang on til Milan.