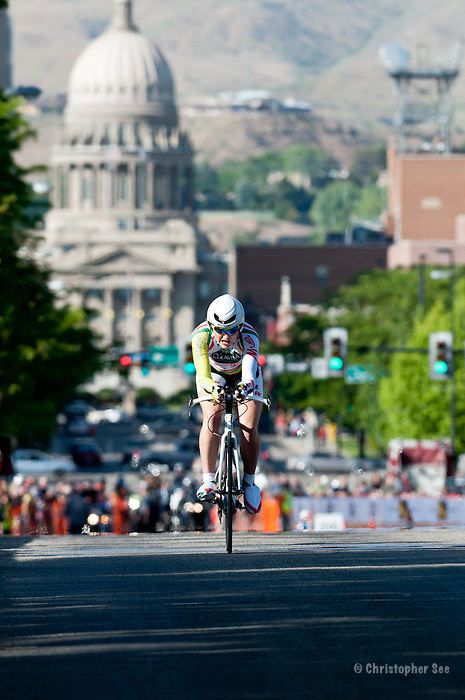 The Canadians are here at The Exergy Tour. Tara Whitten (TIBCO), Gillian Carelton (Canadian National Team) and Clara Hughes (Specialized lullulemon) stood on the podium after a nearly dead flat 3km ITT kicked off the Exergy Women's tour in Boise Idaho. Starting Julia Davis Park, home of the Boise Zoo, the riders crossed the Boise River on the Capitol Street Bridge. A short uphill lead into a quick turn around circuit and back down to the flat return to the start finish.

Whitten, Carelton and Hughes: the Prologue podium at Exergy Tour

By now everyone knows the news of the evening was Kristin Armstrong's fall at the turn around point of the prologue. Friday Morning it was announced that Armstrong would undergo surgery to repair a broken clavicle. She is expected to be recovered in time for the Olympics. The awkward fall occurred at the top of the small rise on the outbound leg of the course. She appeared to cross her front wheel up and tumbled onto her left side. On her return leg to the finish it was not evident to anyone on course that anyting was amiss. The post race video showing a clearly distraught Armstrong being screened from view by her teammates was indication that things had gone off the rails. 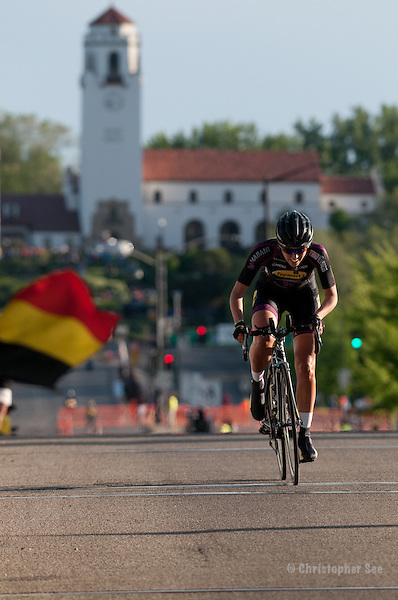 Alison Powers (NOW and Novartis) with one eye on the prize

Starting in Crouch Idaho, north east of Boise, the Queen Stage will climb out of Garden Valley along the South Fork of the Payette River toward the town of Lowman. A short descent, will lead the riders into the valley where Lowman sits on the junction of the Banks-Lowman Road and Highway 21. A hard right turn at this junction leads to the first climb technical enough that a selection could be made. A series of short steep ramps which twist back on themselves could provide occasion for a small group to get out of site and up the road.

Behind this initial section the climb moderates again and the road snakes up to the first QOM at km 50 and an altitude of 1800m. A short descent into a longer false flat leads to the shorter steeper ramp to the second QOM at km 70. This last climb may create a selection, but behind it is approximately 20 km of downhill racing to the finish at Idaho City. The initial descent off the second QOM is steep enough at the top that a climber or group might stay away, but a skilled descender will be able to bridge up and take a run at the finish. The drop off the second QOM is technical, but moderates into a long steady decline to the finish.

With the first climbing sections at low angle and very long, expect that team tactics will control the tempo of the race. The first downhill isn't technical, merely a series of fast sweeping curves. It's finished almost before it begins. It really only serves to break the rhythm of the first half of the race into two sections. The shallow nature of the initial inclines and the long duration of climbing suggests that the team which most successfully controls tempo in the early going of the stage will have the best chance of springing the eventual stage winner. The steeper second and third sections favor a true climber, but with the long run in to the finish expect a small bunch to contest the final.