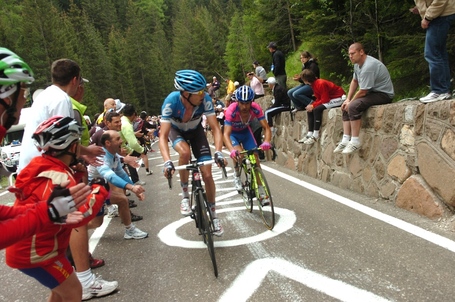 Astana's Roman Kreuziger rebounded from a disastrous, cramp-filled day Wednesday to solo home for the stage victory at Alpe di Pampeago, while Garmin's Ryder Hesjedal inched closer to the overall lead in the Giro d'Italia with a fnatastic display of climbing prowess. While Kreuziger was allowed to escape at the start of the penultimate climb, Hesjedal attacked his rivals with 2.5km to go, drawing only Lampre's Michele Scarponi for company before leaving him and coming within 19 seconds of the stage win. Maglia Rosa Joaquim Rodriguez of Katusha hung on to his jersey, losing 13" form his 30-second lead, but Hesjedal's hopes of victory took a great leap forward today, turning the tables on Purito on what was expected to be the Spaniard's comfort zone.

The favorites stayed mostly together until the final climb, with Liquigas controlling the Bigs group until running out of gas at the bottom of the second and last Pampeago climb. By then Kreuziger was up the road a bit, and Colnago's Stefano Pirazzi was at the front of the race (after riding with FDJ's Sandy Casar for an hour), before Kreuziger caught and passed Pirazzi for the sole lead. Ivan Basso of Liquigas took over with about 4km to the line, but couldn't shake the other GC guys. Scarponi had several digs dig too, each shrinking the group a bit, and putting Basso back on his heels, but the big names stayed together.

How it looked most of the day: 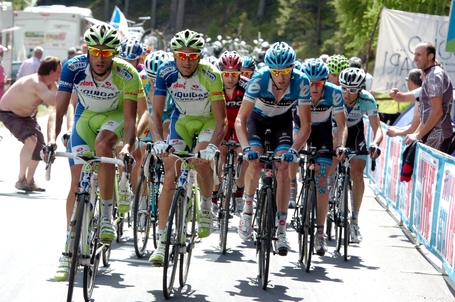 Only with 2.5km to go did the favorites come unglued, with Hesjedal the aggressor. From there, he and Scarponi put small gaps into Rodriguez and Basso, with the former looking like he might close it up and the latter looking like he might crumble. Hesjedal continually looked back at his rivals' faces, digging deeper each time to press his advantage. He was in sight of Kreuziger, but the Czech climber and former GC hopeful was holding it together and got his deserved victory. Scarponi suffered badly in the final km and lost Hesjedal's wheel, while Purito and Basso more or less held their pace, with Rodriguez coming past a faltering Scarponi right at the line. 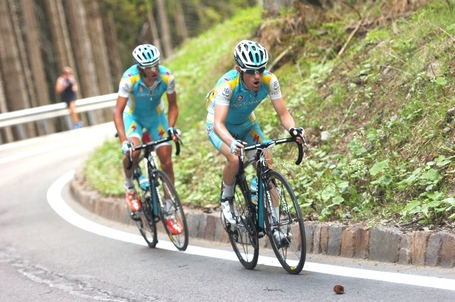 Rodriguez survives, and there is a chance tomorrow he will best the other climbers, but he didn't confirm his ownership of this Giro. If anything, with a time trial looming, he put himself in deeper jeopardy of surrendering that lead, possibly at the last moment, and has only tomorrow to win or lose this race. With only 17 seconds over Hesjedal, he has to gain time over the BC native en route to the massive Stelvio or he almost surely will not win. Results:

This was a ride-sideways-after-the-finish kind of day... 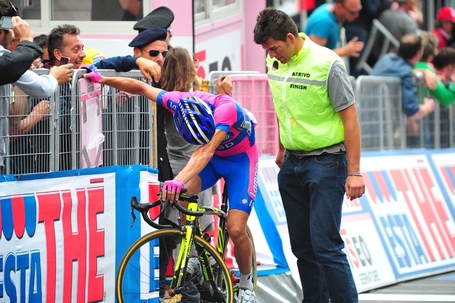