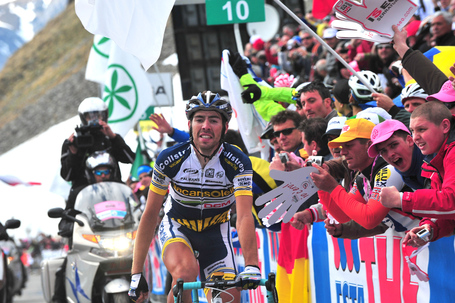 Thomas De Gendt stunned the Giro d'Italia favorites with a ride for the ages, and possibly a grand tour-winning move, as he accelerated away from the race over the fearsome Mortirolo Pass and to the summit of the Stelvio. De Gendt pushed his lead out to five and a half minutes, nearly his entire deficit to the maglia rosa, before tiring a bit at the end and holding on for a one-minute win over Damiano Cunego and 3.22 over race leader Joaquim Rodriguez and 3.36 over challenger Ryder Hesjedal. De Gendt has an outside chance to use his time-trialling prowess to overtake the leaders, but we are probably looking at a two-man race for pink in tomorrow's final race against the watch.

The favorites stayed together, minus De Gendt, over the Mortirolo, and Hesjedal had teammate Christian VandeVelde up the road with the day's escape. VandeVelde descended the Mortirolo, then slowed to wait for his teammate, who he (and Peter Stetina) then paced brilliantly all the way to the 7km mark. From there Hesjedal took the front, the other favorites daring him to leave De Gendt in position to steal the Giro, cynically forcing the Canadian to take the front. Rodriguez did his usual escape in the final km, after sitting in all day, but these tactics didn't work for him, as he gained a mere 14 seconds on Hesjedal and holds a shaky 31" lead heading into his worst discipline. 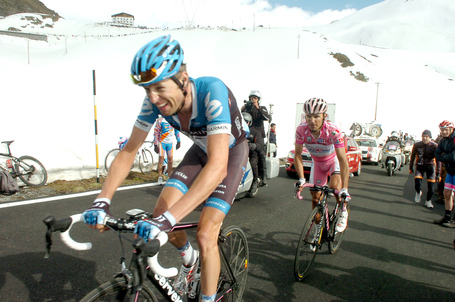 The race for the podium is down to two riders -- Hesjedal and Rodriguez -- assured of spots and two more racing for the third spot at least. Ivan Basso surrendered his place to Michele Scarponi, who accelerated with 5km left when Basso faltered and stayed with the two overall favorites, finishing two seconds ahead of Hesjedal and more than a minute up on Basso. Now he starts tomorrow in third, but 1.51 back of Rodriguez with a scant 27" on De Gendt and no great hope of catching the guys in front of him. Results: