WAIT OF A NATION IS OVER: HESJEDAL TRIUMPHS IN GIRO FINALE

Share All sharing options for: WAIT OF A NATION IS OVER: HESJEDAL TRIUMPHS IN GIRO FINALE 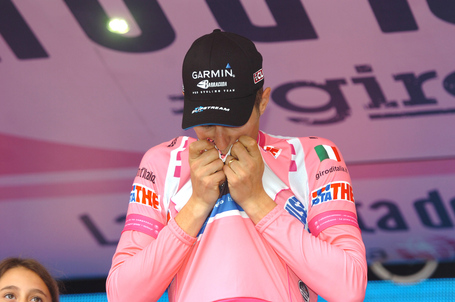 Garmin-Barracuda's Ryder Hesjedal time trialled his way past overall leader Joaquim Rodriguez of Katusha today to become the first Canadian to win the Giro d'Italia. Facing a 31 second deficit overnight, Hesjedal rode a risky but ultimately proficient time trial through the streets of Milan, slipping his back wheel a couple times but staying upright and thundering to sixth on the stage. Rodriguez became the world's top-ranked cyclist by several measures and defied the desperately low expectations for his crono effort, but nonetheless went home the hard-luck loser of the second-closest Giro in history.

Hesjedal's victory is notable for several reasons. It is the first grand tour triumph for his team in its five year run among the top ranking of the sport, which appeared as Slipstream-Chipotle in the 2008 Giro. Hesjedal becomes not merely the first Canadian grand tour winner but the first of his countrymen to appear on a grand tour podium. With Thomas De Gendt of Vacansoleil overcoming Lampre's Michele Scarponi for third, today's finish represents the first all-foreign podium at the Giro d'Italia since 1995.

The Victoria, British Columbia native was not a favorite to win coming into the Giro, regarded as a solid all-round climber and someone who had been surprising the experts but nonetheless unproven as a potential winner in the highest mountain passes, of which this Giro featured several. But Hesjedal said all along that this year's course suited him better than in past years, and his team, now a seasoned grand tour machine, functioned almost flawlessly to deliver him to the win. 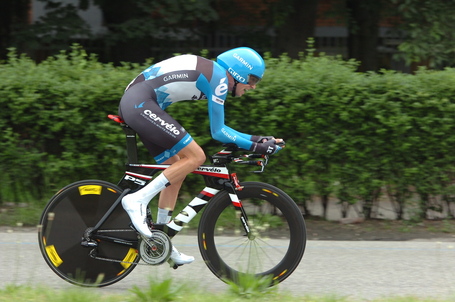 First, they won the team time trial on stage 4, putting a few precious seconds into Rodriguez' second-placed team and minutes into his other challengers. Then, as things heated up in the mountains, they called the right shots, allowing Hesjedal to take risks when there were opportunities to gain time, and finally managing yesterday's dangerous stage to perfection. With Rodriguez and others on his wheel and De Gendt too far up the road for comfort, Garmin maneuvered two teammates into position to deliver Hesjedal to the final climb. Their directors also called the race to perfection, allowing Hesjedal to take responsibility for chasing De Gendt despite the guys on his wheel, but not panicking and chasing so desperately that Rodriguez could drop him and gain significant time on the Stelvio. Rodriguez did leave the Canadian, but only upped his lead by 14 seconds, not nearly enough to hold off Hesjedal and his date with history.