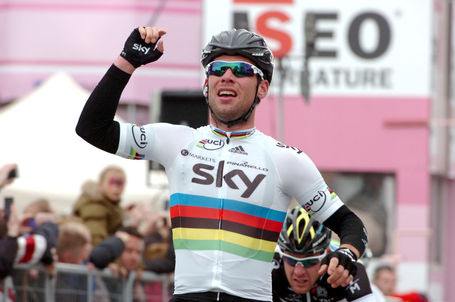 World Champion Mark Cavendish of Team Sky finished off the Giro d'Italia's first sprint stage with his trademark charge up the middle, easily fending off challenges from Matt Goss, Tyler Farrar and FDJ's Geoffrey Soupe. The finale got chaotic in the final curve, where a crash took Theo Bos of Rabobank out of contention, on a day where Bos had won the intermediate sprint. Farrar and Cav each got strong leadouts to 250 meters and jumped, with Goss and co on the wheel of the Arc en Ciel. Farrar's slow return to sprinting form was evident as the other challengers went past and the American had no answer to Cav. Not that anyone else did either.

The action was calm today out on the roads of rural Jyllland, with cold winds and big wide roads. As the race got closer to Herning, Sky took control of the front, with Astana, Garmin, Liquigas, Lampre, OPQS and Rabobank looking for space as well. Maglia rosa Taylor Phinney also occupied a space at the front for the last 10km, but dropped his chain with 8km to go, creating about 4km of drama before he rejoined and defended his overall lead.

Can takes over points. No change on GC or white. Garmin win the team prize.