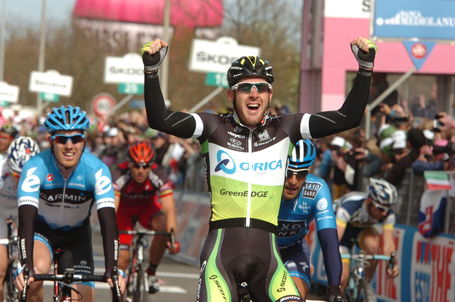 Matt Goss won the third stage of the Giro d'Italia, taking advantage of a well-timed surge by his Orica-Green Edge leadout train in the final 600m of the stage. Juan Jose Haedo of Saxo Bank and Tyler Farrar of Garmin-Barracuda rounded out the podium after being some of the only riders ahead of a crash that took down World Champion Mark Cavendish and race leader Taylor Phinney 100m from the line.

The day was uneventful with a speed bump on the finishing circuit providing most of the elevation gain on the day. The early break contained Ramunas Navarduaskas (Garmin-Barracuda), Reto Hollenstein (Team NetApp), Alfredo Balloni (Farnese Vini-Selle Italia), Martin Keizer (Vacansoleil-DCM), Mads Christensen (Saxo Bank) and MIguel Minguez (Euskatel Euskadi). As the peleton drew newer, Christensen made a bid for solo glory and sponsor exposure that ended with approximately 20km left to race. Lars Bak countered immediately after the catch but never got more than a few seconds lead.

A number of teams tried to take control of the pace in the final ten kilometers, but none seemed to have the firepower to do so. Cavendish's Sky teammates finally wrested control with four kilometers left to race, but with only four teammates in front of the World Champion it was a tall order for them to keep things strung out. And, predictably, the front of the peleton started churning with two kilometers to go. Cavendish slotted onto the wheel of Mark Renshaw, but no one team had a leadout going... except for Orica-Green Edge, which had four riders lined up ominously about 15 spots back with a kilometer to go. As Geraint Thomas (Sky) swung off the front approximately 500 meters from the line, the Orica-Green Edge train powered up the right side of the peleton and wrested control of the sprint, seemingly catching Mark Cavendish out of position. Once Goss jumped, the outcome of the sprint seemed certain as every rider quick enough to overtake him was seemingly caught too far back to challenge him.

The rest is speculation, though, as Roberto Ferrari (Androni) dived right in an attempt to sneak through a gap that wasn't there, taking out Cavendish's front wheel and causing a mass pile up. Arnaud Demare narrowly avoided running over Cavendish's helmet and Elia Favilli neatly bunny-hopped the prone Manxman. Taylor Phinney was less lucky and came down hard on his right ankle. While he made it across the line eventually, his continuation in the race is in question. While Phinney crossed the line in an ambulance, UCI regulations concerning crashes in the final 3 kilometers of race allow him to start on Wednesday after the Giro's first rest day and Phinney plans to do just that.