Following yesterday's review of Philippe Gilbert's My Year in Top Gear, some quotes from Gilbert in the book. 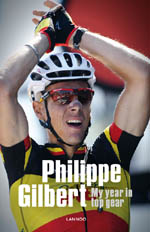 "If there is one bit of your equipment that you absolutely cannot exchange with anybody, it's the shoes. They are bespoke: they're not like the shorts, the jacket or the socks, and so on. They are adapted to your chosen stirrup wedges on your bicycle. [...] In certain formations, you are obliged to choose the team's brand, in others, as was the case at Omega Pharma-Lotto, you can sign a personal contract with a manufacturer. And there, you meet specialists, real professionals who offer you high-performance equipment that is adapted to your needs, it's very important. There is a feeling, also, that develops between you, your feet, and the person who is proposing the equipment."

On the 2011 Omega Pharma-Lotto jersey:

"I was horrified when I first met my future tunic. I had recorded on my Facebook profile that Omega Pharma-Lotto was competing for the ugliest jersey of the group. Vélo Magazine reproduced the information and the people at Omega Pharma-Lotto were no best pleased. Geert Coeman (the financial manager) was not happy, nor was the person responsible for the design. I was severly told to pull my socks up... But happily, a few weeks later, Vélo Magazine produced a ranking of the World Tour circuit jerseys and we came last, so thank you Vélo Mag!"

On the subject of the lack of a leader's jersey in the World Tour:

"My only disappointment, finally, was that I didn't receive a jersey for my place of number one. The best rider in the world was perfectly anonymous in the peloton. I know that there's a project to promote that but it's like in politics, it's a project. It has to be validated, studied, and voted. I have however excellent relations with the UCI, but this subject is obviously not a priority."

On the Tour's maillot vert:

"I'm not certain that that objective is of major importance in a season. A true sprinter likes to win stages, and also Classics. The green jersey or any similar ranking in other events is seldom mentioned in the history of cycling."

"The thing that I hate the most in cycling is giving up. To imagine taking part in a Grand Tour in order to prepare myself and to stop before the end is not my style, unless of course the body is no longer up for it. "

On the World Championships in Copenhagen:

"The course, frankly, was unworthy of a world championship, if the Danes will forgive me for saying so. Fortunately, for the organisers, it was Cavendish who had imposed himself. That rainbow jersey, he will often show it since he is the best sprinter in the world but one could just as easily have had an illustrious unknown on the first step of the podium. In relation to my termperament and to the fact that that I had often, up to that point, been accustomed to leave, to anticipate, people asked me, after the race, why I hadn't tried anything. It was simple: my speedometer was oscillating for most of the time between sixty and sixty-five kph. So to leave on my own at that speed was impossible. Voeckler tried, but I think that it was only to get himself on television. The British selction didn't make a single mistake; it launched itself from the start with the precise aim of protecting Cavendish, who had ridden for just three seconds in the World Championship, the time of his sprint."

On Omega Pharma-Lotto not being entered in the Tours of Oman or Qatar in 2011:

"It was a big mistake by the team. It had initially sent Eddy Merckx a pre-list without Greipel or me on it, whereas each team had to designate at least one leader in order to be selected. It was in a way a B team, Eddy was legitimately very angry: he did not want, to repeat his expression, this tuppeny-ha'penny team. I rang him a few days later to tell him I was coming to Qatar but it was too late, according to him: the papers had been sent to the UCI and nothing could be done about it. I was livid: we had to change all the plans. I had the impression, suddenly, that I was working with amateurs."

"I'm working with the son of the president of the UCI, Pat McQuaid. Andrew deals with registering me in the critériums and I had asked him for his father's e-mail adress. I had actually sent him a text in which I explained my reasons for being against the ear-piece. I'm still convinced they are unfavourable for the attackers in the breakaway groups but for the rest, I've changed my mind: we all make mistakes. Because in view of what happened in the Omloop Hew Nieuwsblad, I realised that the officials weren't ready and that our federation wasn't ready either. The return of the slater cannot happen just from one day to the next. We never knew that the leading group was three minutes ahead. I now have my doubts on the subject. Getting rid of the ear-piece calls for far more motorcylists for the race, just for keeping us informed, as was previously the case. I think that one solution among others would be to equip only two cyclists per team, including the leader, which seems to be fair and go in the straregic direction desired by the UCI while guaranteeing the cyclists; safety. But this depends on the vision of each cyclist, and of each directeur sportif. As wide a debate as possible would be needed, and a consensus to be reached unanimously."

Generally people get offended when asked for an entrance fee for a cycle race. It is also said that cycling is the only free sport in the world. Is it not precisely because it is systematically free that it is suffering, financially? Because let's not kid ourselves, and I had said it once again on the eve of the Giro di Lombardia, our sport is ailing. The crisis is driving sponsors away, cyclists ae finding themselves unemployed, and so on and so forth. I'm an absolute fan of motor rallies: whether the rally is small scale or world level, an entrace fee is always paid. When they go to see a football match on a Sunday morning with their feet in the mud on the side of a provincial pitch, people are also asked for money. I am therefore not opposed to a contribution from the public, a fortiori, on races where there are circuits. But I'm absolutely against the virtually total privatisation of the strategic places and the finishing lines for erecting marquees there where VIP tickets are sold at prohibitive price, which excludes many supporters who can't afford them. Because that hints at exploitation."