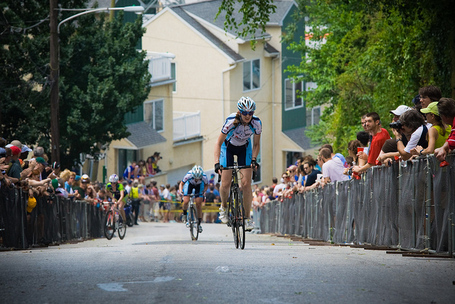 This year brings the 28th edition of the TD Bank Philadelphia International Cycling Championship, a long and storied race.

The men will race for 124 miles(down from 156 in previous years) on a 14.4-mile circuit along the Schuykill River. It starts with 3 laps of the opening 1.5 mile circuit, expands to 7 laps of the full 14.7 mile circuit, and finishes with 5 laps of a finishing 3.36 mile circuit. That means 7 climbs up the Manayunk Wall, which reaches grades of 17%. The finishing laps go around Lemon Hill and Logan Circle, in front of the Philadelphia Museum of Art. Sprinty sprintfest, 99% guaranteed. Men's start list is here.

The course is a relatively flat and fast circuit with one serious bump in the middle - the Manayunk Wall. While it's not even a 250 foot elevation gain, that gain happens in a lot less feet than you'd like. Watching it last year, it acts as a pretty tough filter for the race - if you're going to pop, this is where it will happen. The finishing laps have a much easier climb up Lemon Hill, which may serve to slow things down a little bit, but it won't create any selections.

If you get television via Comcast, you'll probably be able to watch the race race recap [Ed.- I swear the first version implied live coverage, but it's clearly a recap at this point] on your own tv. Check this press release out for a list of channels. I think there's also a fair chance of an audio feed via KYW Radio online (or 1060 AM if you're within range). Online video? Who knows.

Finally, the race is promoting the Event-Hub App as a way to to get live text updates about the race. I've no experience with this app, and am skeptical (my default approach to apps I don't know much about). I'd pay close attention to any permissions it requests, but hopefully it will provide some added value to those following along.