Share All sharing options for: Critérium du Dauphiné: The Things We Learned 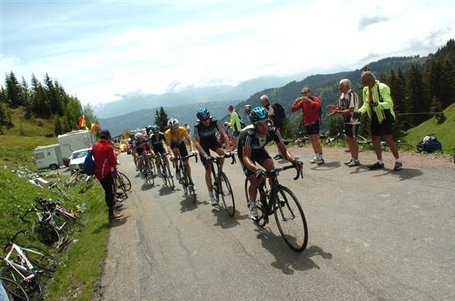 Bradley Wiggins won the Critérium du Dauphiné over this past weekend. I don't think the result came as a surprise to anyone, really. Wiggins has by now established himself as a formidable talent in these short stage races, especially short stage races with long time trials. Wiggins smashed the long time trial early in the race, and rode a solid defense through the mountains. It's a pattern we will almost certainly see repeated in July at the Tour de France. Michael Rogers, a teammate to Wiggins at Sky, finished second.

Team Sky kept a solid grip on this race, and passed their pre-Tour test with flying colors. On the Col de Joux-Plane they set a torrid pace, and kept the feisty Cadel Evans on a tight leash. Sky finished two riders on the final podium. They will be very difficult to beat this July, even if they devote some of their energies to the ambitions of sprinter Mark Cavendish. Over on Twitter, Jonathan Vaughters, while admitting to envy for the Team Sky budget, quipped, "[I'm] not sure why people are suprised by Sky: A few €800k guys pulling a €900k guy, who then pulls for a €1.3M guy, who helps a €2m guy." It doesn't hurt to be able to buy the top talent in the sport.

Against the strongarm tactics of Team Sky, Cadel Evans showed how he won the Tour de France last year, and how he might well win it again this year. Evans was disappointed by his long time trial, saying afterwards that he did not have good legs. Though he could not dislodge the two Sky riders from the top steps of the podium, Evans rode a characteristically attacking race. His move on the descent off the Joux-Plane moved him to third overall and put him within 16 seconds of Rogers.

Evans has always had a feisty streak, and in the past few seasons, he has picked up some big results because of it. He went to the Critérium du Dauphiné with hopes of winning, but the Sky juggernaut stood square in his path. "I came here to try and win, but I was beaten by a better team and a better guy," Evans said in a BMC Racing Team press release. "It was a week of hard racing and a good bit of training toward July and hopefully my big form of the year so far." Wiggins may smash the long time trials again come July, but Evans will certainly not give him an easy ride to Paris.

What to make of Andy Schleck's Critérium du Dauphiné? A generous assessment might call it a disppointment. The RadioShack-Nissan rider crashed during the long time trial, thanks to heavy winds. Then two days later, he abandoned the race. Schleck will have some work to do to be on good form for the Tour. It can't be an easy position for him, especially when the Tour course will do him no favors. 100 km against the watch? Aye carrumba. Really, in his place, I'd just wait for the Vuelta and all its glorious mountains.

One from the random factoid column: Daniel Moreno of Katusha won the final stage, which brought his total for two stages during the race. That matches the feat of his teammate Joaquím Rodríguez at last year's edition of the Dauphiné. Moreno is fresh off the Giro d'Italia and said he was ectastic with his stage victories. He will not ride the Tour de France, but instead the Vuelta a España.

From the French team files: Perpetual attacker Thomas Voeckler of Europcar abandoned on the final stage with knee problems. No word on how severe that injury is. Climber Pierre Rolland, meanwhile, said his form is coming along and he was happy with his ride. If you didn't love Rolland's ride on the Alpe d'Huez last year, I'm not sure we can still be friends. 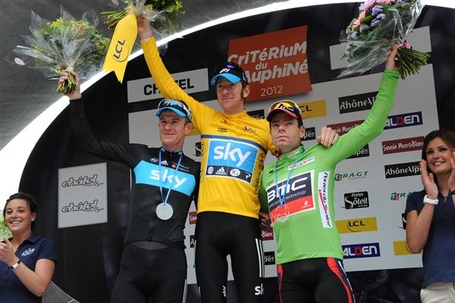 Here are the final standings for the Critérium du Dauphiné.
Photos © Sirotti.