Share All sharing options for: Tour de France: What? No Chris Horner? 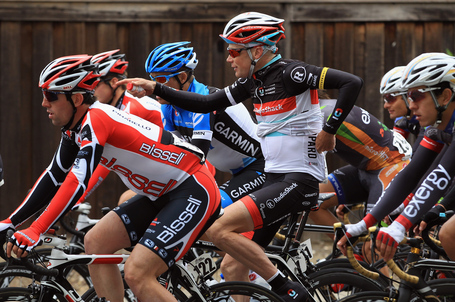 RadioShack-Nissan announced their official Tour de France preselection today. Much to the surprise to just about everyone, Chris Horner did not make the list. Team press officer Philip Maertens told Bicycling that Horner has a back injury that has nagged him throughout the season. (That link includes an audio file with Maertens by the way, because I know you were dying to know what his voice sounded like.)

Horner did not ride especially well at the Amgen Tour of California, which he started as the defending champion. Though he talked a big game early in the race, he dropped significant time in the Bakersfield time trial. A long breakaway on the road to Mount Baldy did not succeed in reviving Horner's general classification hopes. Horner also did not start the Tour de Suisse this weekend, and in the normal way of things, good performances at races like California and Suisse are how riders earn their tickets to the Tour de France.

For a dude with a back injury, though, Horner is certainly putting in some serious miles on the bike. In a Twitter update yesterday, he wrote:

Just finished a 600 mile week. Legs are tired but should be coming around just in time! Weather is good for two more big weeks of training.

Maybe he's just burning off an extra burger or two. Horner, he does like his burgers. No comments have yet surfaced from Horner himself. Certainly, that training load makes it hard to believe that he suffering from injury or that he expected to miss the Tour. Do feel free to speculate irresponsibily in the comments, dear DDIFP.

Meanwhile, you will be wondering who RadioShack-Nissan put on their long list. I'm here to help:

The team plans to announce the final nine riders on 18 June. Will there be scarves? Because I really hope there will be scarves.

Shall we speculate on the final team? Sure, why the hell not. I'll take the following: Andy Schleck (No, I don't actually believe he'll skip the Tour in favor of the Vuelta), Fränk Schleck, Fabian Cancellara, Jens Voigt - Those four are obvious, really. Then, I'll go with Jakob Fuglsang, Linus Gerdemann, Andreas Klöden, Haimar Zubeldia, and Tony Gallopin. Who you got?