Olympic Dreams - who would you pick for the German team?

Share All sharing options for: Olympic Dreams - who would you pick for the German team?

The more I think about it, the more I'm glad I'm not an Olympic team selector, because it's must be a nightmare, balancing different riders' skills and abilities, taking into account their history, the course, the dynamics, etc etc etc. So it'll be interesting to see how the Germans play it - especially because the German Cycling Federation have a bit of a history with odd team decisions. From the time they took Sarah Düster to the World Championships in Mendrisio, but didn't bother to register her, and not telling her, to the decisions over the 2004 Olympic team that resulted in Judith Arndt sending them a very public message, they are one to watch... and it'll be especially interesting this year, because they have to start as one of the top favourites.

Below the jump, I'll tell you the three riders I think have to be given a ticket to London, and who I think will be fighting for the fourth spot - and in the comments you can say who YOU'D take! But we'll start with Ina-Yoko Teutenberg - because if any rider is guaranteed a place on the team, if not on the Olympic podium, it's Teute... 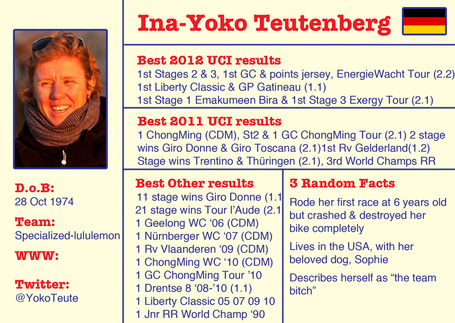 Teutenberg has been the dominant sprinter for years. She's super-strong, capable of getting over mountains, and tactically brilliant - and at the start of the year, she was saying she's planning to leave cycling at the end of the season, ideally with an Olympic medal to round off her superb palmarés.

Personally, I'm hoping that she changes her mind about quitting cycling, because she's so much fun to have around. She's the patrón of the women's peloton, known for speaking her mind, whether it's about riders misbehaving, Pat McQuaid making stupid pronouncements, or the time in the Liberty Classic, when the women overtook the men's race, and she called them "pussies" as they passed! She tells great stories, too - like the time her mother was told she was the worst boy in the neighbourhood, or talking about looking forward to pain - and she even joined us on Podium Café in a livechat! She's tough as hell on the road, expecting her team-mates to work their hearts out, but as much as she sets the bar high, she's also very generous - encouraging her lead-out riders to take wins themselves, and sharing her long experience to help them develop.

If the Olympic Road Race comes down to a bunch sprint, Teute will be the one to beat.... but the Germans have so many more options up their sleeves - if it becomes all about the breakaway, watch out for Arndt! 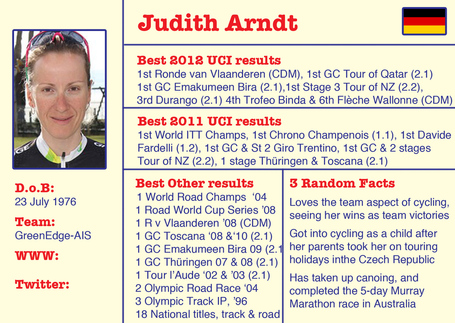 Arndt is such an excellent rider - a threat in the GC of stage races and in any of the 1 day races and Classics, who also will work her heart out for her team. She interviews that the part of cycling she loves best is the team-work, seeing all her victories as belonging to all her team-mates - so there's an irony that she's so good at Time Trialling, which is all about individual effort! As the current World ITT Champion, she'll start as one of the top favourites in London - could she end up with two Olympic medals?

Off the bike, Arndt lives in Melbourne, where she's increasingly getting into canoing, completing the Murray Marathon, a five-day race down one of the longest rivers in Australia, in December 2010, after only starting paddling a few months earlier! She's also recently completed a triathlon, and is another rider who's been talking about stopping cycling at the end of the season - and again, it'll be a huge shame. Arndt is such a force in the peloton, a very generous rider, who'll race as hard for a team-mate as for herself, and her career has been so strong - it'll be fun seeing what else she achieves in the time she has left! 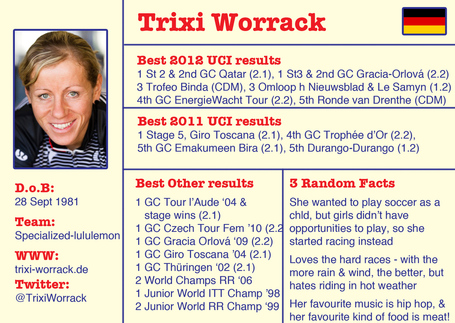 Worrack is a gutsy rider, who must have a whole wardrobe full of "Most Aggressive rider" jerseys. A former Junior World ITT Champion, she was well-known for being all over the podiums, especially on the top step, and especially if the races were difficult! This is a rider who relishes the wind, rain, cobbles and the kinds of conditions that make you shiver in sympathy - but although she's super-talented, it did look, for the past few years, that she was dogged by bad luck.

Worrack had been one of the stars of the super-team German Equipe Nürnberger Versicherung, riding with them from 2003-9, and it looked like the team was going to get even more interesting in 2010 as they signed former World Champions Amber Neben and Nicole Cooke and took on a new sponsor, Skyter Shipping.... and then Skyter pulled out at the last minute, and the riders were left floundering. Worrack ended up racing with the German elements of the team, rescued by Team Noris, but the team was on a shoe-string, and although Worrack won the Czech Tour de Feminin, and came 7th in the Worlds road race, her racing suffered. She moved to AA Drink-Leontien.nl for 2011, and it seemed like there were some odd things happening behind the scenes, with the DS appearing to make comments on the website about how disappointed they were with her (it's always hard to tell what's the true intention and what's the google gnomes) and she didn't seem to find her place.

It might have looked as though her glory days were behind her - but then she moved to Specialized-lululemon for 2012, and just look at her palmarés! She seems to be loving the environment, and is racing brilliantly again, seeming to have a lot of fun working for team-mates and trying her own chances, getting into breakaways and generally causing problems for everyone else.

There's a theme among these three riders - that of working as hard for team-mates as for themselves, and having a huge team ethos. Worrack's top 5 places are often behind a team-mate, and she, Teute and Arndt are all well-known for riding aggressively and self-lessly, as happy to be in a sprint-train, or a suicide break to support a team-mate's GC hopes, as they are to cross the line, arms in the air. That's a scary combination! Those three together will be terrifying - but who will be the fourth one riding with them?

My Daylight Deprived Internet Forum Person opinion is that there are two names in the running for that fourth spot - Charlotte Becker and Sarah Düster. 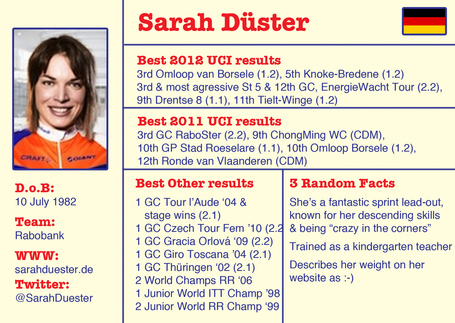 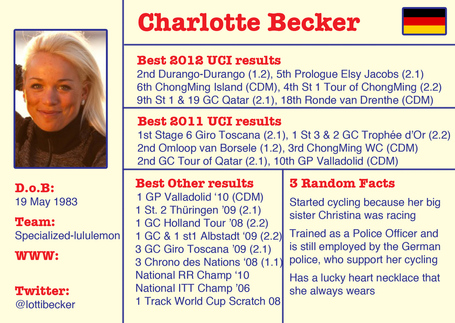 I really don't know which of these I'd choose! Becker rode alongside Teute and Arndt for years on HTC, and would be a great option for the ITT as well, so German Team coach (and Specialized-lululemon DS) Ronny Lauke would already know exactly how she'd work in the team - but she's also on the German Team Pursuit team on the track, and would riding the road race, ITT and track be too much? Düster gets into breaks (she was so close to winning last year's Ronde van Vlaanderen, until her solo ride was caught in the last 2km) but is best-known as a superb lead-out rider, with no fear either on the descents or in technical corners and finishes - but is the road race course too simple for her skills? I guess my solution would be to take both - Becker for the track and Düster for the road, so they both get to experience London!

So that's the team I think will end up in London, but there are two more riders who we could see there. A few years ago, Claudia Häusler would have been a definite for me, but she had a huge crash at the end of the 2010 season, with horrible concussion, and she doesn't seem to have been able to get back to her scintillating best.... although as a climbing specialist, I shouldn't write her off before the Giro Donne! She's a really fun rider - check out her sound effects on this GreenEdge-AIS video - and it was great to see her win Stage 4 at the Exergy Tour, and get back to the podium, where she belongs 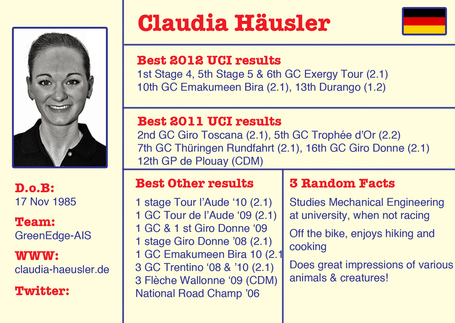 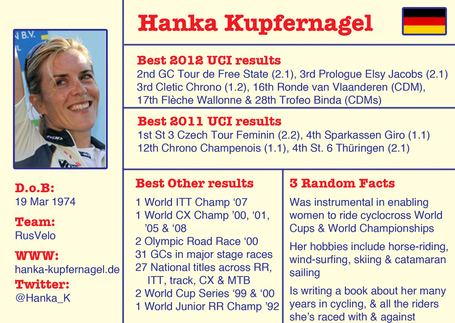 The final rider who's making a huge effort to get to London is one of the heroes of women's cycling. Before there was Marianne Vos, there was Hanka Kupfernagel, a champion across the road, track and cyclocross, with a bit of MTB success in her spare time. Kupfernagel is a total heroine, her palmarés are immense, and she spent a lot of time campaigning to allow women to race Cyclocross at the highest levels, when it was seen as too tough for women, so there weren't World Cups or even a World Championship. She's won pretty much every road race in her time, and came second in the Olympic Road Race in 2000.... but her biggest fight is proving she's still as strong as ever. Just today, the German cycling press reported on her efforts to persuade the selectors - and how they're still sceptical.

Whether she gets to London or not, Kupfernagel should be celebrated as one of the all-time greats of women's cycling. German cycling has given us so many of these superb characters who've been entertaining on and off the bike, and while the big names like Teute, Arndt and Kupfernagel are all talking about stopping at the end of the season, we've got a hell of a lot of cycling to get through before then - exciting times ahead!

So, that's my pick of the riders in the running...... what do you think? Who would you choose? Let us know in the comments!

For more on the riders:

For more on the Olympic road race, see my earlier article on the rules and the race - and I wrote about the riders I think will be in the running for the Australian, USA, British, Italian and Dutch teams