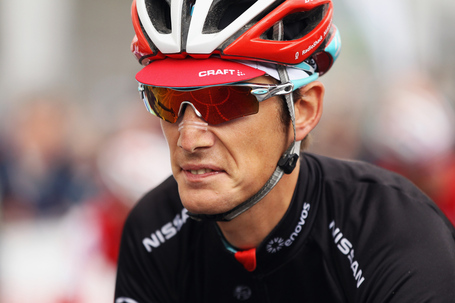 In a press conference Wednesday afternoon, Andy Schleck confirmed that he will not participate in the 2012 Tour de France due to injuries he sustained in the fourth stage of the Critérium du Dauphine. During the time trial, a wind gust caught Schleck's disc rear wheel and caused him to lose his balance and land hard on his right buttock. Though he finished the stage, Schleck was forced to withdraw 60km into the following day's stage because of the pain stemming from his injuries.

Subsequent examination of the injuries revealed Schleck suffered a fracture to his sacrum. The injury will take 4-6 weeks to heal, including a substantial amount of time off the bike.

The injury came after an early season full of disappointments for Andy Schleck. He withdrew from Paris-Nice with illness, then from the Volta a Catalunya on a stage marked by terrible weather and abandons by Bradley Wiggins and Ivan Basso among others. Speculation about Schleck's form began to increase following lackluster performances in the Ardennes classics and heightened as he got dropped several times on minor climbs in the Critérium du Dauphine. Schleck later revealed that he had undergone treatments for a knee injury in the month preceding the Dauphine, which set back his preparations for the Tour de France even further. Hopefully this is the end of Schleck's numerous troubles this season.

Schleck aims to return to competition in time for the Olympic Games in late July and will target the overall classification at the Vuelta a Espana and the World Championships in Valkenberg. This sets the stage for an exciting Vuelta where Schleck will go up against Alberto Contador in one of his first races back after serving a two-year doping suspension.