The Jersey Project, by Bill Humphreys and Jerry Dunn

Share All sharing options for: The Jersey Project, by Bill Humphreys and Jerry Dunn 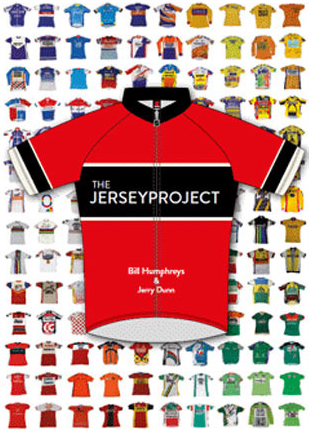 Title: The Jersey Project
Author: Bill Humphreys and Jerry Dunn
Publisher: Trichis
Year: 2012
Pages: 199
Order: The Jersey Project
What it is: A catalogue of more than a thousand cycling jerseys - European, American and a few from races from further afield - showcasing the changing face of cycling over the last fifty or so years.
Strengths: Cycling's history can be told in so many ways - from races to riders through teams and bikes - and it's about time someone took a lingering look at the jerseys worn by riders, showcasing as they do teh sponsors who have bankrolled cycling.
Weaknesses: Some of the translating is a bit slipshod. 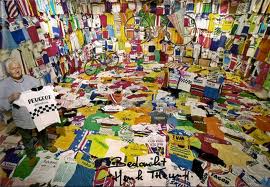 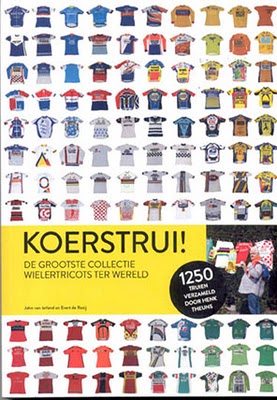 Based on a 2010 Dutch book called Koerstrui - which catalogued Henk Theuns' collection of Euro cycling jerseys - The Jersey Project offers a photographic journey through time and across continents. For the US edition, John van Ireland's original book - which contained jerseys from the Continental peloton - has been expanded to include jerseys from the American peloton.

The Jersey Project is split into two main sections: American and European jerseys (with some obvious crossovers between the two). The European section is the original Koerstrui book and breaks its collection into sections covering track, classics and critériums, the smaller tours, the Giro d'Italia, the Tour de France, national and world championships, cross and the women's peloton.(As you can imagine, this is book crying out for an interactive electronic version which would allow you to sort the jerseys by team, time and rider, not just by groupings of types of races.)

Some of the jerseys are shown simply in snapshot, for others brief pen portraits of the men and women who wore them are provided (the women's peloton is well represented in both sections, from Marianne Martin's yellow jersey from the 1984 Tour Feminin to a selcton of Marianne Vos' World Championship jerseys). These mini-biographies tend toward the factual (and there's nothing wrong with a few facts) but also contain some interesting flashes of colour. Consider these brief tidbits I was amused/intrigued by:

"During the [1951] Six Days of Berlin Gerard van Beek died. Only sixteen weeks later Klaas de Lange was also killed during a club race, he was hit by an oncoming car. Klaas died in Gerard's jersey."

"Without any doubt Derksen was lord and master in de surplice [balancing]. In 1955 he and Antonio Maspes held still for thirty-two minutes!"

"He did not race for the sporting honour, but for hard cash."

"[His career] abruptly ended when he was hit by a car of the NOS (Dutch broadcasting company) just before the start of the [1990] Tour."

"In 1992, during training in Switzerland, he crashed into a deer at full speed and broke several vertebrae. This accident ended his racing career."

"The excellent climber was leading the seventeenth stage of the Tour in 1965 when fate came in. He responded to the attack of Julio Jimenez when his chain slipped. He crashed hard, his handlebar ended up embedded in his thigh."

"In one of the stages [of the 1988 Vuelta] he fell, just one kilometre off the finish line. Quickly he got back on his bike and fought back to his super servant, Erwan Nijboer, straight through the peloton to the front to win the mass sprint."

"After his career Fons de Wolf became a gravedigger."

"[Vanspringel] is known as the schlemiel who lost the yellow jersey in the last ride of the Tour to Jan Janssen in 1968."

"Sometimes he is too much dreamy and forgets to bring his shoes, or even his bike, to a race."

Something that's obvious from the above quotes is the quality of the English translation of the original Dutch text. Even more so than in Philippe Gilbert's My Year in High Gear the rendering of the original text into English is pretty slipshod. It is obvious that The Jersey Project is a labour of love, and everyone involved deseves to be applauded for what they've achoved. This, however, is no excuse for failing to pay due attention to the actual words in the book. Regrettable and all as the poor translating is, it does have to be acknowledged that this doesn't detract too much from a book that is, after all, more about the images than the words. 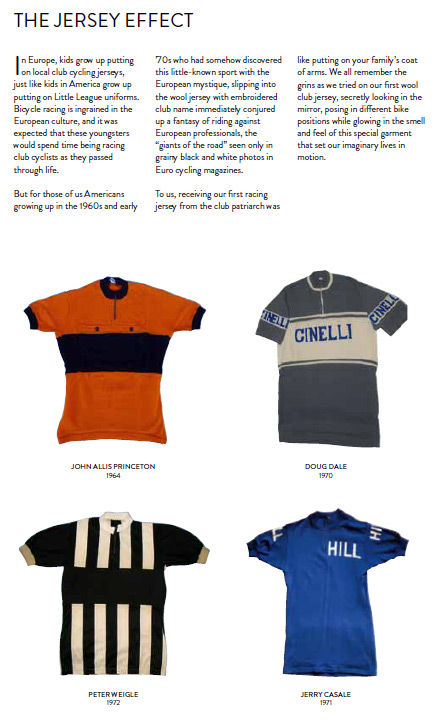 The American section of The Jersey Project sees fifty pages of jerseys which tell a sort-of chronological history of American cycling since the 1960s through to more recent years. As a way of illustrating the history of American cycling this is remarkably effective. The pictures of the jerseys trace the waxing and waning in the sport's popularity in the States, with the number and variety of sponsors on the jerseys illustrating the varying levels of interest in the sport. You have jerseys from 1964 and 1972 which are simple designs, no club or sponsor name on them (the Amateur Bicycle League of America only opened the door to commercial sponsors in 1972) and from there can then trace through jerseys showing a single club or sponsor's name to the multi-sponsored jerseys of today. The text accompanying these images is economic yet remarkably effective in tracing the history of American cycling over the last fifty years.

Overall, The Jersey Project is something of a curiosity. But, if you're at all curious about cycling's history - and the different ways that history can told - this is a book you should be looking out for.