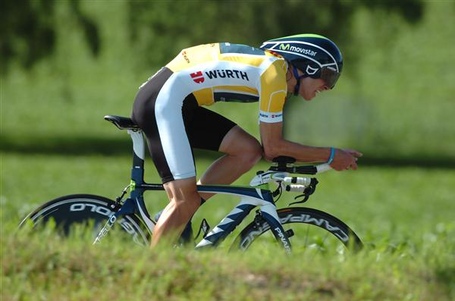 It is hard to tell what the biggest story of the Stage 7 time trial in the Tour de Suisse is - Fabian Cancellara's loss to Fredrick Kessiakoff, Rui Costa's killer ride to stay in the leader's jersey, or Robert Gesink's incredible top 5 finish. For those of you who wished the Tour de Suisse had more drama - you got some today!

Fabian Cancellara set an early best time - as everyone expected. But approximately half an hour the unthinkable happened - he was usurped from his hot seat perch by Fredrick Kessiakoff, the Swedish former mountain biker who rides for Astana. Though Kessiakoff has some good all-round and stage racing results, including a stage and overall win in the Tour of Austria last year, this is surely the most famous scalp he has taken in the four years since he switched over to racing on the road. Perhaps it was the sizeable amount of climbing in the 34km time trial that helped Kessiakoff.

As the race went on, nobody could better the time of Kessiakoff on the hilly circuit. Maxime Monfort was the closest, but he was a full 20 seconds back.And as the afternoon wore on our focus shifted to the battle for the overall classification, which was at stake today.

The top 15 riders on GC were dominated by climbers who gained time on Stage 2's summit finish to Verbier. With several notable time trialists - especially Levi Leipheimer - just outside the top 10, the question was how the purer climbers would fare in the time trial. Extra attention was directed at Frank Schleck, Robert Gesink, and other Tour de France overall contenders in what was an important test less than a month before the Tour de France begins.

The first hints at the outcome of the day came as Robert Gesink - no noted time trialist - finished in 47'03", a mere 27 seconds behind Kessiakoff. While Gesink has clearly focused on improving his time trial since a disastrous final time trial in the 2010 Tour de France - even winning the hilly time trial at the 2011 Tour of Oman - this confirmed his efforts have paid off. And though he appears a pure climber, he may prove more of an overall GC contender than Fränk and Andy Schleck in the long run. And this TT? Maybe it really would favor the climbers over the specialists.

Surprises continued to come in as supposedly better time trialists Levi Leipheimer and Tom Danielson finished between 1'15" and 1'25" down on Kessiakoff. Levi appears to be still struggling to come back to form after a broken leg earlier this spring and visibly expressed his frustration after going through the second time check at 22km over a minute behind Kessiakoff by waving his right arm around, apparently unconcerned with how drastically un-aerodynamic that was.

The final battle for the overall came down to the efforts of Roman Kreuziger, Fränk Schleck, and Rui Costa. Kreuziger is normally the best time trialist of them all and put in a respectable effort to finish 16th, but that was not as high as many expected before the day began. Perhaps fatigue from riding for the Giro d'Italia overall classification is catching up for him. I, for one, cannot imagine racing anything after completing a Grand Tour.

Schleck put in an average time trial, finishing 28th at 1'37" back. That is what we would expect from him on a flat time trial, though, so how do we read into that placing in a hilly one? One can't be sure exactly where Fränk's form is, but he was visibly losing time in some of the trickier downhill sections, especially compared to Monfort's daring descent.

Finally, a big question mark disappeared when Costa crossed the line for 8th on the stage, a mere 41 seconds behind Kessiakoff and ahead of all the overall contenders save Gesink. Costa has shown hints of time trial proficiency in the past and confirmed in a big way today. He now leads Kreuziger in the overall standings by 50 seconds.

Tomorrow is the penultimate stage of the Tour de Suisse. Will the overall standings get yet another shakeup? Will Costa's form hold, or can Gesink take 55 seconds out of him on the HC finish to Arosa? Or, will everyone keep their powder dry until Sunday's queen stage? Personally, I can't wait for the weekend to see!