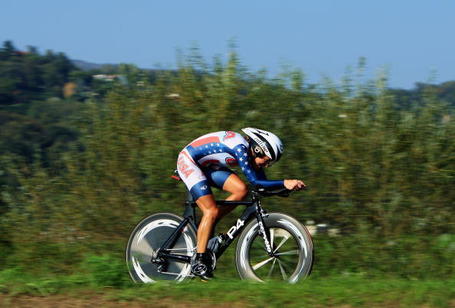 The United States cycling Olympic team for the London Games was announced today by USA Cycling. On the women's side, the team includes automatic selection Evelyn Stevens. Kristin Armstrong, Shelley Olds, and Amber Neben will join Stevens to complete the team. The 2008 Olympic gold medalist Kristin Armstrong and former World Champion Amber Neben will represent the United States in the time trial event in London.

On the men's side, there were no riders who met the automatic qualifying standard. The committee selected sprinter Tyler Farrar, Chris Horner, U.S. national road race champion Timothy Duggan, Tejay van Garderen, and Taylor Phinney. Phinney will ride the time trial for the United States.

On the women's side, Carmen Small and Megan Guarnier are the two riders who missed out in the road selection. With her consistent international results, Guarnier played a key role in helping the U.S. pick up valuable UCI points during the early season. Small, meanwhile, is a selfless teammate who has contributed significantly to the U.S. national team's international successes.

But when Stevens and Olds both won World Cup races, the competition for the team became much tighter. Stevens won Flèche Wallonne, then Olds won Chongming. Though Stevens received the automatic bid, thanks to her higher UCI ranking, Olds showed that she could win a top-level international race, an important consideration for the selection committee. Olds is presently the strongest bunch sprinter among the U.S. women, too, and is consequently a logical pick for the relatively flat London road race course. Neben, Armstrong, and Stevens, meanwhile, can be counted on to stir up the action on the breakaway front.

Though Kristin Armstrong broke her collarbone at the recent Exergy Tour, she quickly returned to training, and the committee plainly felt confident that she could nail her form for London. After all, she has won a gold medal once before. Evelyn Stevens won the 2011 time trial national championship, and hoped to contest the event in London, but the more experienced Neben got the nod. Neben won the time trial at the Pan-American Games earlier this season and won the time trial stage at the Exergy Tour, the most recent opportunity the U.S. riders had to impress the selection committee.

On the men's side, Farrar is the easy pick. He is the top bunch sprinter among the U.S. riders, and the men's race in London will likely end in a sprint. Though he was passed over for the Tour de France by his RadioShack-Nissan team, Horner received a slot on the Olympic team. Remarkably, despite his lengthy career, Horner will ride his first Olympic Games this year. Duggan is the current U.S. national champion and a ridiculously strong support rider. Young talents Tejay van Garderen and Taylor Phinney round out the team.

It's no real surprise to see Phinney on the team, despite his young age. In fact, London will mark his second trip to the Olympic Games after he competed on the track in Beijing. The kid's got talent, and maybe equally importantly, he is stellar with the media. It is something of a surprise to see Phinney ride the time trial instead of six-time U.S. national champion David Zabriskie. Phinney, currently in his second professional season, recently won the prologue at the Giro d'Italia. He'll be a darkhorse to medal in London, but he has the kind of talent that tends to bring the big results when it counts.

It's possible that the recently opened U.S. anti-doping case against Lance Armstrong has influenced the selection process. According to documents in the case, at least ten riders have given evidence in the case. A story at ESPN suggested that the committee might avoid selecting riders who might be connected with the case. That dynamic may explain the absence of Zabriskie from the team. Zabriskie rode for U.S. Postal during his early career between 2001 and 2004.

You can read the full press release over on the USA Cycling site.