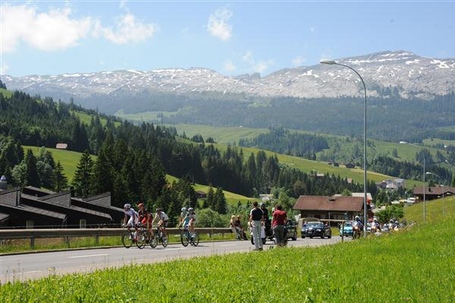 Rui Alberto Faria da Costa of Movistar defended his slim lead in the Tour de Suisse, winning his first high-profile stage race and the notching first Portuguese victory in the 76-year history of the race. Costa marked his fellow favorites over two major climbs toward a modest uphill finish, coming over the line with Frank Schleck of Radio Shack, Levi Leipheimer of Omega Pharma and Robert Gesink of Rabobank, all within 25 seconds of his lead. Tanel Kangert of Astana won the stage in a long sprint with Jeremy Roy of FDJ, after attacking from the long-range breakaway. Their success took time bonuses off the board, making Costa's job that much simpler.

Frank Schleck enlivened the racing with an attack over the final hors categoire climb of the race, the Glaubenberg, which he lengthened out to 50 seconds, virtual yellow, on the descent. But the presence of 10km or so of flat and false flat made Frank Schleck think twice about staying away, and he rejoined the group of favorites for the last climb, a cat-2 rated affair that the race had used a couple hours earlier in preparation for the Glaubenbielen. Costa's teammate Alejandro Valverde took up the pace-making, keeping things tight with Rabobank's Steven Kruijswijk, a minute back on GC, just up the road. Valverde's work helped seal the victory for Costa.

The 76th Tour de Suisse turned out to be a nail-biting affair, as can happen when the highest peaks are bypassed in favor of a mellower route. The race underwent an early sorting on stage two, in a climb to Verbier that summarized the parcours, selective but heedless of the more inspiring climbs visible on all sides. Friday's time trial shook things up significantly, but not enough to inure leader Rui Costa against attacks over higher climbs throughout the weekend. His lead dwindled dangerously as he faltered on Saturday's final climb to Arosa, but Costa's time trialling brilliance gave him enough of a cushion to hang on, and the final stage was less threatening than the preceeding one.