The Condor and the Watch: A Tour de France Love Story?

Share All sharing options for: The Condor and the Watch: A Tour de France Love Story? 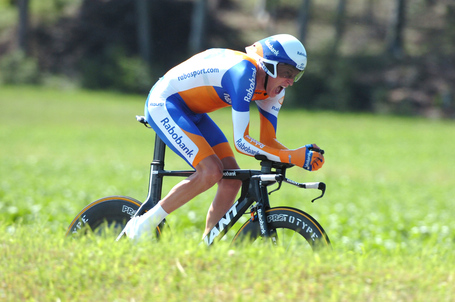 Yesterday Rabobank announced their Tour de France startlist, and it made my eyeballs pop out of my head. Now, for starters, I am curiously excited by all things Oranje. Curiously because...

None of this has stopped me from predicting massive Dutch success in cycling's biggest races over the last few years -- "Dutch" being shorthand for either Dutch riders or Rabobank, usually both -- and except for the odd Langeveld shocker, I have been as accurate and prescient as a stuck clock. I swore to shut up about Rabo from now on, joining their legions of fans who are convinced that there is no talent edge their directors can't squander, when the riders themselves aren't doing so first. And yet... and yet... check out this startlist for the upcoming Tour de France: [Op de flip] 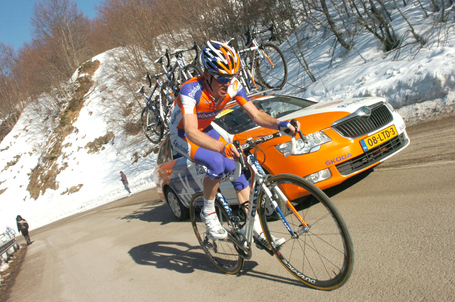 That is a loaded team. Just loaded. Rabobank won't be alone in having an armada of climbers at its disposal, but they might have the best-conceived GC squad from top to bottom. Gone is any hint of competing agendas (but not forgotten, Oscarito!). There's practically nobody you see here and think "stage hunter." They will go a-hunting for stages when the opportunity is there, but even the most obvious candidate, Sanchez, will be quite useful to team captain Robert Gesink when necessary. The non-climbers like Tjallingii and Tankink and Renshaw are ideal workers on the flats, guys who bring plenty of power if Rabo were to take the maillot jaune in the second or third week of the Tour and find itself having responsibility for the pacemaking between climbs.

The job of knitting together some real results from the typical Rabobank slate of endless promise falls on Gesink. The Condor of Varsseveld -- or Bobo, as he is more simply known (please tell me this is "Bob, oh" and not bo-bo) -- is an accomplished rider whose talent has always pointed his career toward the Grand Depart, but too infrequently has it gotten him to the Champs Elysees in the position you'd expect. He is a brilliant climber, but too often crashes, injuries and at least one bad day in the saddle have derailed his efforts. Last seen at the Tour, Gesink was struggling with a bad back and slipping backward. Before that, he was finishing just off the podium, 5th at the 2010 Tour, thanks to the Crono from Hell. Before that was the broken wrist.

Crashes are one of those things, and while luck is not entirely random and Gesink gets criticized for his handling and positioning, he's made it to a few Grand Tour finishes intact, so he can do these things. The bigger question -- the elephant in the room, really -- is what can he do against the watch?

In 2010, Gesink made a bit of a rep for himself as a bad cronoman, thanks to a Tour de France closing time trial where he finished 108th, over eight minutes down on the stage (and, for reference, five minutes down on Bradley Wiggins). His position on GC didn't change as a result; at most you could say he lost a chance to move up a bit. But this followed on the heels of the disastrous 2010 Tour de Suisse last-day time trial, where he left the start house in yellow, chunked two minutes, and watched Frank Schleck end the day, and the Tour, in the winner's circle. Gesink ended fifth overall there too. Pressure? Maybe, this was his first foray into big-race leadership. Tired legs? Probably not, as he spent the previous Suisse stages dropping everyone but Alberto Contador. In the Tour he may have been leaking form. Who knows?

That sets up 2012 for the clear question, can Gesink do well enough in a crono-heavy Tour? Can he crush Wiggo and Hesjedal and Evans in the mountains by enough of a margin to inure him against losses in the crono? The answer is, perhaps but probably not. But his opportunity lies in the question itself. Losses in the crono? Are we so sure?

Take a look at what he's done since that bad month on the aero bike:

On to 2012... where suddenly he's positively ripping it up on the crono bike:

To be clear, this doesn't make him Bradley Wiggins, a guy who has a well-worn history of doing exceptionally in long time trials. It doesn't make him Cadel Evans, who time-trialled his way into Yellow last time they held one of these things. But it does raise some questions about how we should see the guy. He's not a disaster against the watch. He might actually be a very pleasant surprise. And in a wide-open race where he can out-climb his closest rivals, The Condor has a chance to soar.

Personally, I think his broken leg from last year raises a few questions about what he really has in store this July. Severe injuries that rob you of winter training, that's the sort of thing that can ruin your last run at the Pyrenees. But nothing less than a crystal ball can answer that question. We know this -- if he loses the Tour, it won't be because of his team. Mollema and Kruijswijk alone should give him plenty of company, or give the team plenty of weapons to deploy in a more aggressive mode. Rabo are ready to make their impression felt at this Tour, and only luck or really atrocious management can get in the way. 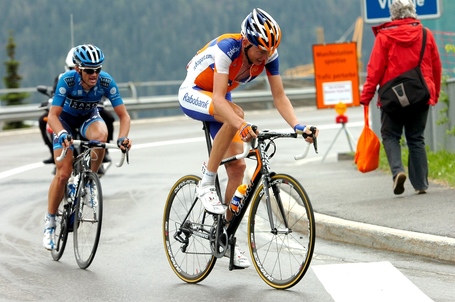