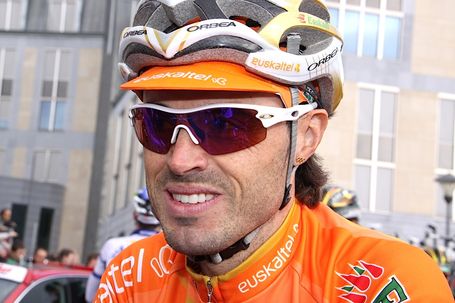 The storyline for team Euskaltel Euskadi is pretty damn simple: the only one who really matters here is Samuel Sanchez and for Sam San he has a big window of opportunity at the edition of the Tour and if he doesn't grab it he'll probably never get another real chance. Below is the Euski team listed and on the jump we'll talk about why its all Sammy all the time for this team, the personal stakes that are on the line for him and how much of a chance he has. First the team:

- I listed each rider's age to make the point that this team is built for now. We don't know all the teams yet but this team is probably the oldest team in the Tour peloton this year. Most of these guys will be out of racing in 3-4, save Gorka Izagirre (brother of Giro stage winner Ion) and the immensely talented Samu, because there just aren't many 35 year old domestiques are there? (Yes, you no doubt will now name a couple but that's it-those old domestiques are the exceptions that prove the rule.) So this year-maybe next year-this old gang will be be broken up forever. Appreciate them while it lasts.

- The other thing is that these helpers of Samu will almost undoubtedly not be present when crunch time comes in the mountains. We will see these guys in two places with one of them being much more likely: they will be well represented in the many ill-fated breakaways, and if if IF Samu take the GC lead they wil be there to lead the peloton-until the going gets real tough. When that happens-Business Time!-they will be long gone. If Samu is to make an impact on this race, he'll do it with little assistance from his teammates.

- That said I understand why Eskaltel is not sending Nieve and Anton to help him. They'd not be a real threat what with all these time trial miles and neither one is a sure thing on any course. Better those two combine forces in the climb-ier Vuelta. Then Sanchez can concentrate on the Worlds RR where the Spanish team, the core of which is already announced to be Sanchez, Valverde, J-Rod, Contador, Freire, and Rojas, on a very hilly course stand a very good chance.

As I just noted, Sam San is 34 this year so the clock is ticking on his ability to make a TdF podium or produce an upset win like Carlos Sastre did in 2008 at age 33. You never know when an aging GC rider loses that special little bit extra where he goes from GC heavyweight to afterthought to retired until its already happened. Sastre retired only three years after winning the Tour. Guys like Menchov, Leipheimer, Evans, Basso, Scarponi, Kloden, Horner: some have already slipped; all eventually will succumb.

So is Samu past his due date? Judging from his results so far this year, no. Since his late 20's he's been a pretty consistent rider and this year he's had the best first half of any year for him:

That's probably the second best performance of any stage racer this year outside of Bradley Wiggins (and excluding the Giro riders of course) and its as consistent as he's ever been. True, he used the Dauphine as on-the-job-training but you can't fault him for that.
But its one thing to dominate week long stage races and quite another to win a Grand Tour. Wiggins has never been able to close the deal on three weeks of hell. Sanchez though-you got to think that his body can stand up to the three weeks of punishment fairly well. But that's not really the question here. The real question is can he breakthrough to podium or *gasp* win the damn thing? Since 2007 he's podiumed in the Vuelta twice and in the Tour he's finished 5th (2011), 3rd (2010 after Contador got busted so he never stepped on the podium in Paris), and 6th (2008). Top 10, nay top 5 is no big deal for him. Top 3? Top 1? Err...
But here's the thing. Contador and the Schelecks aren't here this year and that leaves a huge vacuum for the other GC guys. (Yes, I know Frank will be physically present. BFD. Won't mean much. He's already checked out.) He's got a golden opportunity this year for the podium and he looks to have fewer questions surrounding him than anyone else except Wiggins, Evans, Nibali and maybe Gesink. That's not saying that guys like Valverde, Menchov, Mollema, Van Den Broeck, etc. can't rise up and catch lightning but the scenarios for those guys are more difficult with a smaller margin for error. You know Samu is gonna be near the top of the leaderboard.
Thus we come to the question of how? How can Samu podium or win? We know the course and we know Samu. He's a decent but not great time trialer on a course with 100 miles km of time trialing. He's one of the best climbers but he's not Contador or Scheck good. He is a great descender. What's his program then?
Pretty simple really. Obviously he needs to max out on the mountain stages to give him cushion for the time trials. Stage 7 is his 1st opportunity. Stage 8 with its finish on a descent off a cat 1 climb might give him an advantage though the finish line is 16 km from the top of the climb. Still he should chance things there. One can imagine he and Valverde and/or Nibali bombing that descent. Stage 9's time trial: he HAS to limit his losses here. He can't be standing say 10th or 12th after that stage. Stage 10 is another opportunity for a descending finish: 40 km from the top of HC Gand Colombier, 20km from the top of the last cat 3, but you think if he's feeling good that he'd chance it. After stage 12 and the end of the Alps, he needs to be in contention-close enough to possibly take over the lead in the Pyrenees. Once the race is done with the mountains, he needs a Sastre-in-08 lead and a Sastre-in-08 time trial performance to either win the whole thing or podium.
What are his chances? Slim for the overall, decent but not great for the podium. Still he has to know that this is his great chance and he's unlikely to have another. If he understands that urgency, he's got the talent to do something special.
Photo by Patrick Verhoest for the Podium Cafe