Share All sharing options for: British Cycling announce their Olympic women's team - and it makes no sense 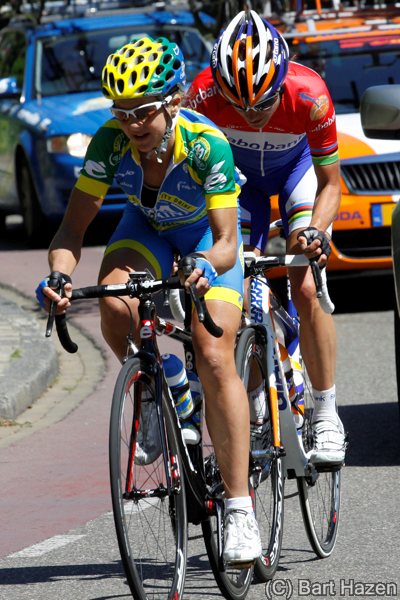 I need to start by making it very clear that these are my own opinions only, and not of Podium Café as a whole, but....

WHAT ARE BRITISH CYCLING THINKING???

They've just announced the women's team for the Olympic road races, and I suppose I should have guessed it would be a strange one, when they said they'd announce the women's team before Nationals, and the men after, but here are the 4 riders who'll be competing in the Road Race:

Those four riders are all super-strong, all great riders, and it's going to be a world-class team, but there's something that just doesn't seem right - there's no Sharon Laws! Below the jump I'll explain why I think this is crazy.

So why is this such a weird decision?

Well, both Emma Pooley and Lizzie Armitstead are obvious choices - Pooley, a former ITT World Champ and Olympic silver medallist, is a must for the ITT, and could also pull off one of her trademark suicide attacks in the road race - and Armitstead is a powerhouse both in the breakaways and in the bunch-sprints, but it seems (in my personal opinion!) utter madness that their AA Drink-Leontien.nl team-mate, Laws, isn't the clear choice for the third spot.

We can start by looking at the latest UCI rankings, which were published on 31st May, where Laws is the 4th best British rider, and has won a load of UCI points that got the British team their four places at the Olympics. And we can look at their palmares - here's this year's results for Laws, as opposed to Cooke's and Martin's.

But of course, we all know cycling isn't about just the paper results, especially for riders like Lucy Martin, who's been working hard as a sprinty domestique, and Nicole Cooke, who's had health issues this season - but this also counts for Laws, and makes not taking her seems an extra odd decision.

The thing about Sharon Laws is that she's well known for being the type of rider who will work herself to the bone for her team-mates. If you follow women's racing, you'll be familiar with race reports where Sharon has attacked early, making the rest of the peloton chase her down - and then attacked again, tiring teams out so that Emma Pooley or Lizzie Armitstead can launch something crazy, or so that the AA Drink-Leontien.nl riders can sit back in the bunch, getting towed to the finish. Just this week, in the Giro Trentino, there she was, helping control the chase in the first stage, with Pooley up the road (and winning the bunch sprint from the chasing group full of big names) and then, in the second stage, attacking endlessly, finishing in second place. The same thing happened in the Holland Hills Classic, where she came 3rd - and in Gracia-Orlová, where she was one of the few riders to challenge the dominance of Specialized-lululemon. And pretty much every time we report on a victory by AA Drink-leontien.nl, there's Laws in the write-up, having worked her socks off for the team victory.

I want to reiterate - I am really happy for all four riders who have been picked, and I'll be backing the team all the way - they're all super-strong, and I'd hate for them to read this and see it as a reflection on them - but I just don't understand why on earth we wouldn't take a rider like Laws, who is the perfect team-mate, and is guaranteed to make the race hard for other teams. I can only assume that British Cycling are assuming this will come down to a bunch sprint, and are planning a two-pronged attack, with Martin riding lead-out for Armitstead, and Cooke riding lone-wolf for herself - but with Armitstead having proven all season that she doesn't need a lead-out to win, and the small women's teams meaning the race will be much more unpredictable, having a rider with Laws' form, tactical brain, team ethos and breakaway skills seems to make much more sense to me.

UPDATE! If you're thinking this is just my opinion, look who else agrees

And if there's one person who knows everything there is to know about women's cycling, and the best riders in the world, it's Marianne Vos!

Thanks again to Bart Hazen for the use of his photo - for more on the riders who were in the running for the British team, check out my post from back in April