Unresigned to failure: the over-40 riders of the Tour de France

Share All sharing options for: Unresigned to failure: the over-40 riders of the Tour de France 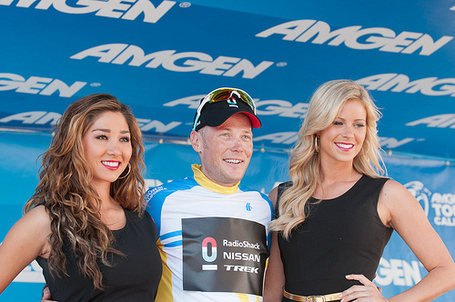 Most middle-aged adults have resigned themselves to failure--Malcolm X

Paris, July 2, 1904. Eight-eight riders line up for the first stage of the second ever Tour de France. Thirty-three of them will not start the second stage--two will be disqualified for cheating, the rest will abandon. The not-yet-zombified Maurice Garin will win the stage in 17 hours and some change, with Lucien Pothier following just 24 seconds behind. It is duly noted that they surely would have finished in better time, had they not been attacked by four masked men in a car. And nearly 5 hours behind them, with a total time of 22 hours, 3 minutes and 27 seconds, Henri "le Père" Paret finishes the stage in 26th place. He is 50 years old.

The ’04 Tour, fraught with scandals including massive cheating and fan sabotage, became a race of attrition. Just 27 riders finished in Paris, and 12 of those would later be disqualified, resulting in a grand total of 29 DQs in the race. Curiously, two of the mere 15 left standing set age records that have yet to be beaten: the original 5th place finisher, 19-year-old Henri Cornet, is awarded the win and remains the youngest victor in Tour de France history. Henri Paret, settling in at 11th place, is still the oldest finisher—and the oldest participant—the race has ever known.*

Paret’s record will be hard to beat, but in the years since the one and only time he rode the Tour another 21 riders over the age of 40 have lined up at the start, attempting a total of 39 Tours amongst them. Most of these were in the days when amateurs were allowed to compete, classed separately from the pros as 2ieme categorie or touristes routiers, the unsupported "tourists of the road," and most of them ended in abandons. But of the first 22 editions of the Tour (1903-28, with a gap for the Great War), only 4 did not include at least one rider over the age of 40. 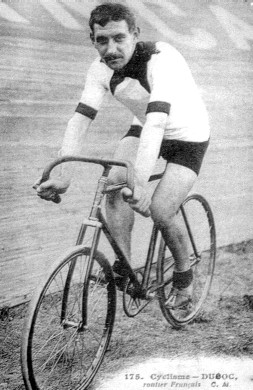 Indeed, in 1927 a record 5 cyclistes d’un certain age lined up at the start. Although some of them had competed professionally in their younger days, they were all classed as touristes routiers this year, and four of them abandoned by the end of the third stage. One of these, Paul Duboc, was participating in his 8th and final Tour. He’d already racked up 5 career stage wins, and almost certainly would have won the 1911 Tour if someone hadn’t handed him a poisoned bidon in the feed zone in Argelès.

Race organizer Henri Desgrange found him in a ditch in the Pyrenees, "in a terrible state," overcome by vomiting and diarrhea. Duboc somehow continued on and finished the stage in 21st place, his dreams of the overall win shattered. It was probably small consolation to finish 2nd in the final general classification, which may explain why he attempted seven more Tours—including two in his 40s—hoping for the win he was cheated of in 1911. 1927 was his last try. He 43 years old, competed as a touriste routier, and abandoned during the first stage.

Only one of the five older gentlemen who started in 1927 finished the race. He was Giovanni Rossignoli, age 44, who holds the record for most starts in his 40s with five. Rossignoli is better known for winning 3 stages and finishing on the podium three times in the Giro d’Italia back in his twenties. Rossignoli also started 3 Tours in his younger days, abandoning early in 1904 and ’09 and finishing 10th in ’08. He returned to the Tour in 1923 at the age of 40, and remarkably completed all five editions from 1923-27, finishing not-too-shabbily in 29th, 33rd, 19th, 21st, and 32nd place.

1927 has the record for most older riders starting, but the record for most finishing is split between 1925 and 1926, which each saw 2 of the over-40 set completing the race. Both times Rossignoli was one. The others were 40-year-old pro Eugène Christophe of team J. B. Louvet-Pouchois, who would finish 18th in 1925, and the aforementioned Paul Duboc, then 42, in 1926.

After 1928, the Tour seems to have become a younger man’s game. Although touristes routiers were allowed until 1938, no one over 40 is recorded to have participated again until 1962, when 40-year-old Giuseppe "Pino" Cerami rode for Peugeot-BP-Dunlop.** Pino Cerami is best known perhaps for winning Paris-Roubaix and Fleche-Wallonne in 1960, but he also participated in 5 Tours. He finished 81st in 1962, and would return at age 41 in 1963 to take the victory—and the record as oldest stage winner—in the 9th stage before abandoning five days later.

Only three other over-40 cyclists have competed in the Tour de France since, all of them, like Cerami, rounding out distinguished careers. In 1976, Raymond Poulidor graced the podium in 3rd place in his final Tour at the age of 40. Seven years later, Joaquim Agostinho, who’d finished on the podium twice before and won a career total of 5 Tour stages, completed the 1983 Tour in a respectable 11th place at the age of 41. And in 2006, Viatcheslav Ekimov of Team Discovery Channel finished his 15th and final Tour at the age of 40.

So is 40 over the hill? Sure, if you're talking Alps and Pyrenees. The history of over-40 riders at the Tour de France stretches back at least to the second edition, and continues proudly this year. Currently,two 40-year-old riders appear on the preliminary start list for the Tour de France, RSNT’s Jens Voigt and Chris Horner, born respectively in September and October 1971. Should they both show up at the grand depart, it will be the first time two riders over 40 have started the Tour since 1928; should they both finish the race it will be the third time in history and first since 1926. Never before, though, have two 40+ riders competed on the same team—that record is theirs and theirs alone.

*Paret’s record is as a living rider. If you check the records for the 1952 and 1953 Tours, you will find Henri Paret listed as finishing in 78th (lanterne rouge!) and 57th place respectively. Since he would have been 98 and 99 years old at the time, there is no logical conclusion other than that he was participating as Zombie Henri Paret, and is thus ineligible for "oldest rider" consideration. Otherwise, Zombie Maurice Garin would be setting a new damn record every year. Also, do not believe internet sources that claim Jules Banino was 51 in the 1924 Tour, and so was older than Paret in ’04. It’s not true: Banino was born in 1892, not 1872. He was a mere puppy of 31.

Photo of Paul Duboc circa 1911, public domain, via Wikimedia Commons