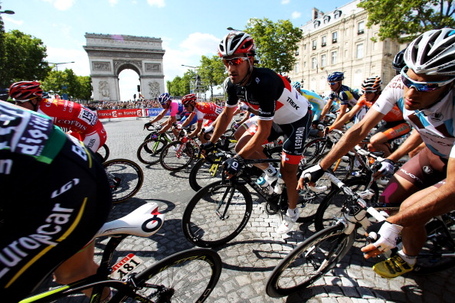 Hello Cafe folk. Wassup? Lol. Ahem... I know we've only been together, what, six years? It feels like just yesterday. Anyway, I made you a mix tape. Yeah, I know, but I think it really captures where we are together, right now. It's got all the best bits from the Tour de France. In fact, given that it's 2012 and I can magically drag this metaphor into the present, it's not a mix tape, it's a playlist! And I can keep adding to it! Which I shall do, throughout the week.

Because you mean a lot to me. And this is a special time. I'm not saying -- you know -- I'm just saying. I was gonna make you listen without knowing what's coming, but that would torture this metaphor beyond its utility, and anyway it's a playlist now! xoxo lol

Come flip with me...

Here's your lineup of Tour previews for 2012!

Jen See on the Maillot Jaune

Chris Fontecchio on the Maillot Vert

Vlaanderen on the Maillot Blanc

Douglas Ansel on How a Climber Can Win

tgsgirl passes on some actual music

Not new, but for a series of Tour de France primers, check out our Know Your Tour series!

This post will live in features and be filling up all week. Obviously there's much more to come. Because you and me, Podium Cafe, we're just getting started!