Giro Donne 2012 - Preview Part the First - In which we leave Napoli, then return with a song in our hearts

Share All sharing options for: Giro Donne 2012 - Preview Part the First - In which we leave Napoli, then return with a song in our hearts

Because July's not just about the France, OK. News about this year's Giro Donne has been very late coming out, and there are suggestions that the race very nearly didn't happen because of problems with one of last year's sponsors, but it seems that things have come right at the last minute, because we have a race, we have stages, we have maps, we have profiles, we have teams, we have a better than ever battle of the team buses and we have what could well be the best ever media coverage of the event. So why waste your time with those endless futile breakaway attempts across the plains of Northern France. Not even Bradley Wiggins does that anymore. Instead bunk off that first week and sneak a peek at the biggest race on the women's calendar, the Giro Donne.

This year's race is made up of 9 stages running 961 km, starting this Friday, 29th, in Naples and finishing on Saturday July 7th in Bergamo in the foothills of the Dolomites. It's a lot less mountainous than previous editions, with just eight categorised climbs, of which only one is a 1st Cat, which means that the GC could be a lot more open than it has recently. We'll look at the riders elsewhere, but follow over for the first part of our preview of the stages themselves. 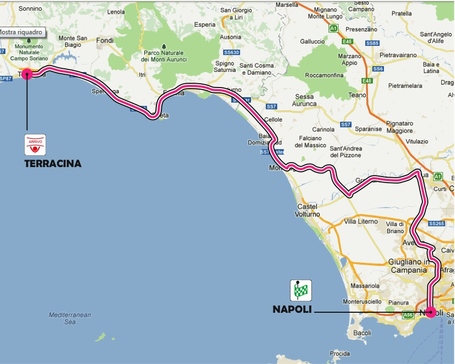 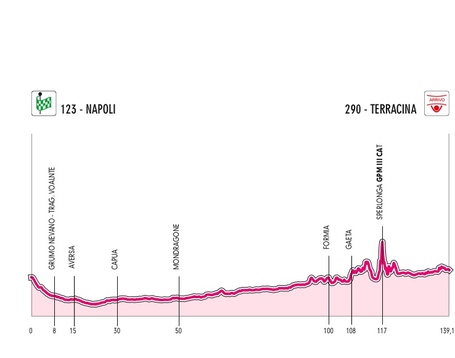 Stage 1 runs from Napoli to Terracina. It's a fairly flat stage that starts off in the absolutely stunning Piazza del Plebescito (which has its own page in the Italian Wikipedia if you want to know more), takes a neutral (ha ha, if only I could find what Vicki Whitelaw said about neutral starts) loop around the seafront, then heads north to the edge of town and the start proper. It'll be an aggressive start because the only intermediate sprint comes after 5.9km in Grumo Nevano, site of the final stage of the 2009 Giro.

Continue with part 2 and part 3. From there it continues north to Capua, follows the old Via Appia to the coast, diverges from it then rejoins at the finish at Terracina. The Giro seems pretty fond of the Via Appia, since last year's race started out at the Roman end of this road. There's a small climb near the Emperor Tiberius old villa (although the one he apparently got up to all the naughty stuff, if you trust Suetonius, is in Capri) at Sperlonga, 20km before the end, which gives a second chance for someone to try and get a race jersey, but from then on it's so flat that a sprint finish is nigh on a 100% certainty. 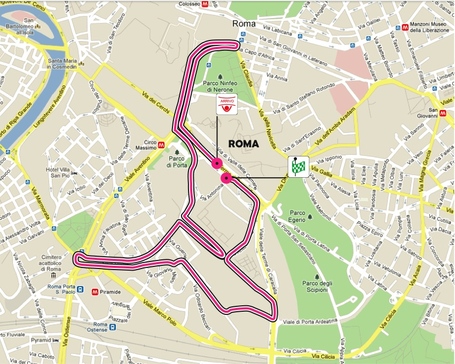 Stage 2 is a 7.2 km time trial in Rome, starting and finishing at the Baths of Caracalla and covering some of the same roads on which Dennis Menchov so memorably had his race saved by his mechanic in 2009. Let's hope it's a drier day. If you want to explore the course, the whole area around there is on Google Streetview 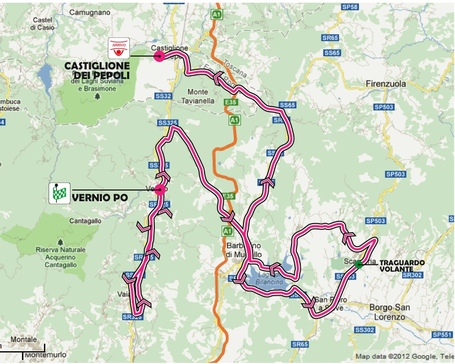 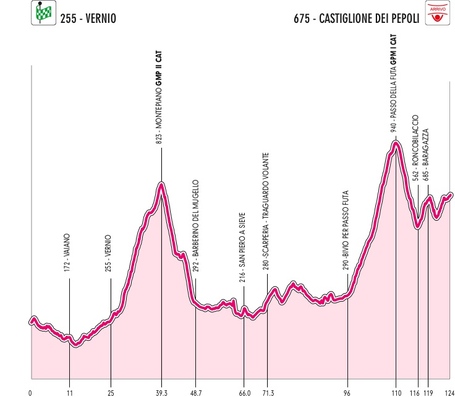 Stage 3 follows one of the Giro Donne's legendary transfers. A late evening drive of 330km to Vernio, just to the north of Florence, precedes the toughest climbing stage of this year's race with two categorised climbs, including the only 1st category ascent of the whole race at Passo della Futa, before a downhill run-in to the finish line at Castiglione dei Pepoli 124 race km away, although quite a bit closer for the feathered among you. At 72km they pass through the small town of Scarperia which hosted the prologue back in 2009 (was that a good year for someone). That year we also had the pleasure of German reporter Enrico Muax embedding himself with the Nurnberger team to produce some of the sharpest cycling video reports ever made. Here's his report from that day, then hit zuruck at the bottom of the page to navigate the rest. German not really required (after all doesn't being a cycling fan mean not understanding what's going on in at least a dozen languages). Beyond that? There's a line in the song Wilkommen from Cabaret: Do you know the funny thing about Hermann? There is nothing funny about Hermann. I feel the same trying to find something to say about where the race is going today. OK there are very few finish towns for which a search of Google Imagesw lead to both an extensive history of bomb disposal and a wet T-shirt contest, but this is meant to be a family friendly sort of site. Lebowski stuff excluded, I guess. And what is hugely frustrating is that I know from experience that when the Giro Donne visits these little places that don't appear in the history or guide books, then it usually produces the best racing and the warmest welcome from the spectators. Who can forget for example the finish to Cerro al Volturno in 2009 as below, or last year's ascent through the tunnels to Ceresole Reale. 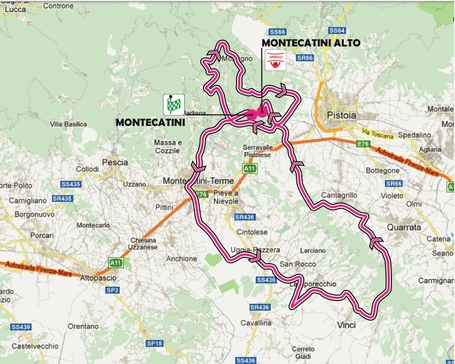 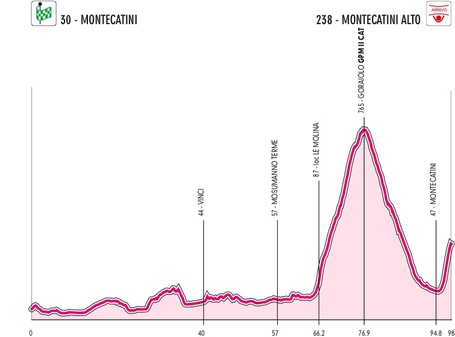 If the name Montecatini Termini, the start of stage 4 sounds familiar, that's because it was also the scene of the finish of stage 11 of this year's men's Giro, so to remind yourself, have a look back at our very own Tifosa's report, or even better enjoy seeing those well known supporters of women's cycling, Team Sky, overcooking the final corner and launching Roberto Ferrari to the win. Today's stage begins there, takes in two large loops in the surrounding countryside, including the cat 2 climb of the Goraiolo, before ending with what looks like our best chance of a nasty nasty uphill finish in the old part of Montecatini, Montecatinin Alto. Do I know that they're not taking the easy way up? Well that way would be on the funicular railway, which might be great for a sing-a-long if you only know two words of Italian but would make a pretty dull bike race. Although the orologio might be a dream too far.

So that's stages one to four. And given that the last You Tube link was to a traditional Neapolitan song, that seems a good place to ennd part one of this preview. I'll be back in a couple of days with the rest, but beyond looking at where they're going, here's a few ideas on how to follow.

Three years ago I commented:

And in the nearest thing we have to live coverage Liz Hatch has posted a photo of herself and a teammate (Liza Rachetto) before the start, plus a short report:

Ah, those days of distant fog. Lyne came up with a list of seven possible Twitter accounts to follow, but in the event almost no-one else managed to get a signal/wi-fi or whatever. Three years on and everyone has stepped up their game quite a bit more than a notch, but although we're going to have to crank up a gear too, I've no doubt you'll find plenty of reasons to keep coming here. So where should you look for news? Well the race organisers themselves are promising some live race updates on their twitter account @Girodonne. Who else? Well Sarah's in the process ok making a Twitter list of all the accounts we know that are either at the race or likely to be sharing insider information. It's a work in progress, so if you find a name she's missed then let her know in the comments. Twitter search is also pretty good for finding unusual stuff, although as no-one can agree whether the race is called the Giro Donne or the Girodonne, it's worthwhile trying both.

And for video, Rai Sport are planning two daily reports. The first will be a short early afternoon report as part of their daily coverage of the Tour de France. That will probably be geo-restricted as they don't have rights to show the Tour beyond Italy, and are unlikely to switch it off for just a few minutes. But then at 7pm every day, Rai Sport 2 will have almost an hour of coverage, and given that the race organisers have made that announcement in both Italian and English, there's a very good chance that it will be available to all. If you want to try and get official word then you can try contacting them through Twitter. Or even perhaps sending a message to Davide Cassani or Alessandra de Stefano (who latter, judging from her interviews with David Millar, will be very flattered if you can do it in French).