Tour de France Preview: Liquigas- Have They Jumped The Shark?

Share All sharing options for: Tour de France Preview: Liquigas- Have They Jumped The Shark? 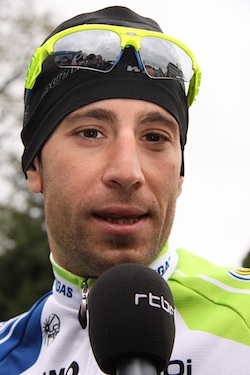 You gotta ask it: Vaughters did it, Bruyneel is doing it, so why isn't Amadio doing it?
Useless speculation on il flip!

What? As you've probably read, Johan Bruyneel has told his rider Jakob Fuglsang that he's not riding any more World Tour races this year since he's looking so hard to leave RSNT at the end of the year. The logic makes perfect sense even though Johan comes across as a bit if a dick: any World Tour points that Foogs earns goes with him if he changes teams so why should Bruyneel enable another team? Makes total sense given the $#%$#@ way the UCI is using World Tour points to select teams for the World Tour every year. But its happening and I can think of three ramifications that I'll be interested to see play out:

1) Fuglsang is rumored to be heading back for more Saxo and given that anything that Alberto Contador does in the next two years won't count towards World Tour points, Bjarne Riis is gonna be looking out for riders to buy which have the points. (Note that Riis/Saxo wil be challenging this rule to the CAS in due time.) Normally Foogs would be towing around a bushel full of points but not this year. After a slow start to the year Bruyneel is benching him for the World Tour races. Probably Foogs will still head towards Saxo (he's an investment that should pay off in the years ahead) but with Tinkoff's money in the pocket, Riis will be spending as much time at the Tour with rider agents as with his present team in hopes of buying his way onto the World Tour next year. Rumors should be flying think and fast over the next three weeks.

2) Next up, Johan Bruyneel. Last we saw him he was bowing out of the Tour because he's caught up in the HWWNBN legal mess. So you'd think that he'd be concentrating on saving his carcass. But no! Holding Foogs out of races seems like the act of a DS who thinks he's gonna be DSing next year with the same team, doesn't it? You might think that he's just closing ranks with L..HWWNBN (sorry, I can't do that name any more) but then you got the strong rumors of not only Foogs jumping ship but the Schecks going to a new German team AND Cancellara going to a new Swiss team. Sum up those defections and you got RSNT being ancient Oregonian Chris Horner and a bunch of rusty sprockets. Kinda hard to imagine that they will be existing next year-but here we have Bruyneel acting for all the world that they will be.

Strange. Johan's been in this pickle before: with Astana when Vino came back. remember in 2009? The Astana year started with Contador and HWWNBN and his cohorts culminating in the showdown in the Tour. But after that the team totally changed with Vino re-entering the picture: Bruyneel, Contador, HWWNBN, Levi: the main riders for the team exited while Vino and B-teamers raced the Vuelta. Looking forward, in addition to the Saxo-Tinkoff new rider rumors we are looking forward to the possible imminent implosion of RSNT and the announcing of one or two new teams.

3) Which brings us to Jonathan Vaughters. Bruyneel is not the first DS to sideline riders that he knew were going to another team. Last year JV of Garmin did the same with Thor Hushovd in the Vuelta-although he did let Thor ride the Tour.

4) And that brings us to Vincenzo Nibali and Liquigas. Its general knowledge that the Shark is moving to Astana next year. So you gotta ask the question of why is Leeky allowing him to ride? Why don't they throw all their team behind Peter Sagan for the Green jersey and just go stage hunting in the mountains with Basso and Szmyd? Or blood a couple of their youngsters in the Tour-guys like Nerz (who is going) and Moser (who isn't)? So what gives?

Dunno. Where this story gets torqued is the fact that Liquigas is withdrawing as sponsor at the end of the year and unless he team finds a new one then the riders are all free to go. That might be the explanation: if there are no sponsor prospects on the horizon then it makes no difference if Nibali takes his Tour-earned points to Astana cause it will mean the exact same as Sagan taking his points to wherever he goes. That's tea leaf reading for ya.

So we will have a third set of Tour rumors to look forward to: where does Sagan and the rest of Liquigas wind up? Sagan will command a huge paycheck. Who needs a sprinter? Katusha. Saxo-Tinkoff. OPQS. Astana. Lampre. Really any team would love to have the best young rider out there. then there's the other team members. There's been rumors of a Basso-Riis reunion. Moser? Haven't heard anything but surely Lampre would love to get their mitts on him....

And so on. Oh how this team looking for the Tour? Really, really good. Green jersey for the Fastvakian; GC podium for the Shark.