FSA DS: So You've Decided to Win the Tour...

Share All sharing options for: FSA DS: So You've Decided to Win the Tour... 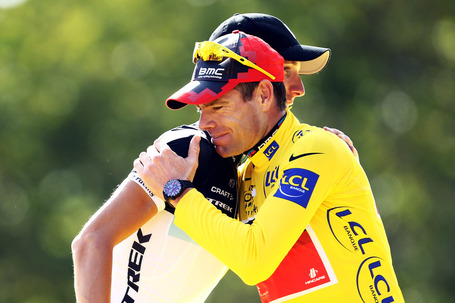 As we come up on the cycling calendar's biggest (non-cobbled) event, the Tour de France, it's a time when the entire sport drops its usual thing and goes to another level. Media is off the charts. Teams roll out their Tour selections at gala events. New products come on line. New sponsors too... which means new team names. It's all happening.

And the winners, they're universally recognized as the kings of the sport. I've made a second career (cough) out of explaining to casual fans why the winner of the Tour of Flanders is a badass, someone they should care about. But I don't live in Belgium or Italy, where some other race is the pinnacle. I live in the rest of the world, where the Tour is what it's all about.

And so do many of you. Which is why it's time to ask, should you have the Yellow Jersey on your FSA DS team? The premise I've generally gone on is that in our game the Tour de France uses the same points scale as the Vuelta a Espana and the Giro d'Italia. It's just as sweet to win the almost-forgotten Vuelta as the Tour, and far easier. [Except this year, but hey.] Pick the best Spaniard or Italian who has made it clear they plan to win their home tour, and you've got a pretty good bet on a big cache of points. Just like being a real Directeur Sportif.

Better still, that guy won't cost you as much as a Tour winner. Just like being a real Directeur Sportif. Sure, maybe for the actual teams and riders the real prizes are prestige and publicity, and in those respects the Tour is incomparable. But as far as competing within the UCI structure, you can buy Ryder Hesjedal or Michele Scarponi for a fraction of what it costs to sign Alberto Contador, and bank big points.

Is this true for our game? Join me on the flip!

Tour de France winners cost. No doubt about it. Why? Because I know you guys, and if the Tour winner is 18 points he'll be on 650 teams. So let's go thru the past few years. I'll go with the guys who won the Tour as far as the competition is concerned, instead of the 18-months-later revision.

To contrast that, let's look at the other grand tour winners in that time frame.

The obvious conclusion is that if you can buy guys for under 10 points and get a grand tour podium, you've got one foot in the winner's circle already. Surely that's way better than blowing your budget on a guy who will win the Tour. Right?

Yep. If you can. But consider:

Bottom line: picking some low-cost guy to win the Vuelta is a lottery ticket. Be happy when it happens, but be realistic too. A quick look back shows that in 2011, VeloNews profiled nine possible Vuelta winners, and Cobo wasn't among them. Neither was Froome. They didn't literally come from nowhere, we knew who they were, but as far as their Vuelta successes, Froome and Cobo were shock results nonetheless.

Sometimes a guy is so low-cost, and not completely overlooked, that you get the opposite effect. Hesjedal is on 168 teams right now; De Gendt 227. They're still lottery tickets. Like Cobo last fall, they weren't regarded as favorites to be on the podium in Milan... but they were guys you could imagine doing something, and the price was enticing, regardless of where the potential points were coming from. Put another way, people picked them up as solid bargain buys for their FSA-DS teams, and wound up holding lottery tickets instead.

As for those high-priced Tour winners, it's worth noting:

You don't win the Tour with some nobody. Picking the Tour winner may consist of selecting among the two or three or five guys who have a chance at winning the greatest race in the world -- a selection of selections, not at all like a lottery ticket. Tour winners are safe, solid and somewhat predictable. Pick the strongest rider in the world, and chances are something good will happen.