Tour de France: What Time Is It? It's Time to Get Paid!

Share All sharing options for: Tour de France: What Time Is It? It's Time to Get Paid! 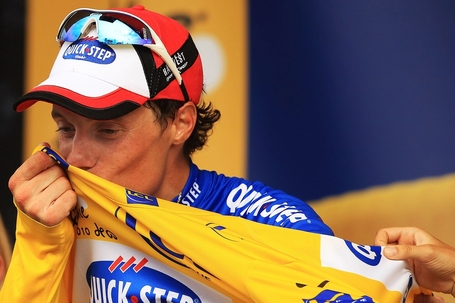 Want to know what the Tour de France is about? I mean really about? I'll start with a quick quiz.

Q: What is the Tour de France about? I mean really about?

Answers on the flip!

The Tour was initially designed to one-up the long-distance races which were generating so much publicity at the time. Bordeaux-Paris? Paris-Brest-Paris? Paris-Roubaix? I see your one or two way races, and I raise you one consolidated tour of the entire damn country!

But those days are long gone. Not only do French people know all about France now, but so do American tourists, as any hotelier in July can tell you. So what's left?

The traditions of the Tour are lovely in and of themselves. No disrespect. But the Tour has gone international, decades ago. This isn't the Giro. The Tour belongs to the world, and it's nice of France to host for us. Next?

Don't misunderestimate the point I'm making here. This is the biggest prize in cycling, from a purely sporting perspective. Everybody knows that and acknowledges it. But if the Tour disappeared, there would still be plenty of races to stimulate the sport. The Tour is the biggest thing, but it's not everything. So...

Yes, economics. Now, I'm not an insider but people who are tend to say things like "teams pay their year's worth of bills at the Tour." What they mean is, they compensate a year's worth of sponsorship through their exploits at the Tour. This is especially true of cycling industry sponsors, who like to run ads in August saying "our wheels just won the yellow jersey!" and distribute posters to that effect to every bike shop in the western world.

Inside the teams themselves, there is another important development going on at the Tour: prize money! This is undoubtedly the biggest direct cash payout available in the sport, and somehow I doubt, looking at the numbers, that this goes unnoticed. Let's take a gander at the Tour de France prize money list for 2012!

[Special thanks to Jen for finding this. Discovering the Tour de France rulebook is a bit like one of those Indiana Jones movies. Jen is now having nightmares about running through a cave being chased by giant spiders. But whatever, she succeeded! And now I can write this post.]

What Prizes Are Available?

And so on, to the point where everyone who makes it to Paris gets at least 400 Euros, or enough money to stay a couple more days in Paris. The holder of the yellow jersey after each stage gets €7,000. And yes, Andy's dropped chain in 2010 might be the most expensive shifting mishap in cycling history.

For the Green and KOM jerseys, the final standings go eight places deep:

Nice little payout, so you can see why people care about this:

Each day the most aggressive (coughFrenchcough) rider gets €2000. The Super Combatif prize given out in Paris is worth €20,000. Be! Aggressive! B-E-Aggressive!

For every stage, flat, mountain or ITT, prizes go 20 deep as follows:

And so on, down to €200. The Team Time Trial is the lone exception, with prizes still 20 deep but slightly more money on the table for the top finishers:

To defray the cost of participation, the Tour also hands out the following cash payouts (boy, we really aren't in America now):

Oh, and anyone want a special task? How about keeping a prize money scoreboard running as we go thru the Tour? Whoever volunteers to do this (which will probably just require Excel and a few minutes a day, email me and I'll send you the entire prize list (it's in .pdf).