What riders are saying about the Giro Donne 2012!

Share All sharing options for: What riders are saying about the Giro Donne 2012!

I know I'm a day late, but while we're waiting for the ITT to run it's course (and possibly for some little race in France to start), I wanted to tell you what riders were saying about the Giro Donne before it began. And where better to start than with the rider everyone will be watching, last year's champion, Marianne Vos? I asked her about the race, and just for us, this is what she tweeted back:

Not too much to say. I'm really looking forward, because Giro has nice stages & great atmosphere. Less mountains than last year, but still hard I think. More riders with chances on this schedule. With the Olympic Games coming up, who's going to give everything? Some will play poker for sure.

I'm glad to be back racing now after my collarbone fracture & shape feels okay. Pink is no main objective but will enjoy racing & get better

Below the jump, some views from Aussies - which one, do you think, has packed the hair straighteners....?

Well, it's Miffy Galloway! She started out with some fairly sensible answers to my questions

Having ridden the Giro at 19 years of age in 2009, I am all too familiar with the gruelling nature of a 9 day stage race. You do not want to go in to this type of race with anything as little as a sore toe or a sniffle, as I found out when I had to pull out of my first Giro agonisingly close n on day 8/10 from a back injury. 3 years later I have no doubt that I have matured both physically and mentally, but I don't think even those 3 years are enough to prepare me for what lies ahead. Pain is inevitable, but suffering is optional.

This year as a domestique, my role will be to suffer so that my team leaders don't have to. I will be taking each stage day by day and treating it as though each day is it's own one day race. The 2012 Giro is one of Team Faren Honda's major focus races of the season and I am nervous but excited about rising to the challenge of achieving their goal! I just hope I can make my team proud, whether it be by protecting our sprinter on the flat stages or helping to position our mountain goats on the climbs ( I know which one I would prefer ;)

It's probably my fault - I asked her what's in her Giro Donne Survival Kit...

hahhahaa in my GD survival kit??? Well they say if you can't win - make sure you look good. So just in case: along with crisp, untouched kit - My hair straightner also makes an appearance and I have actually just finished doing my nails (see pic attached ;) ) 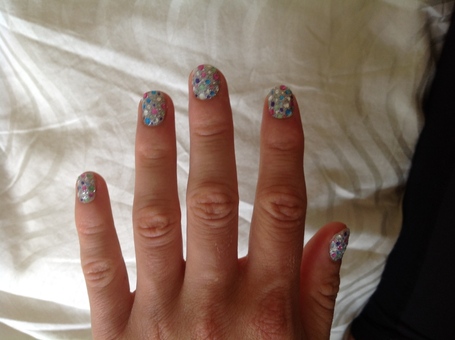 bloody oath i'm taking my straightener ;) although i think that my enthusiasm of straightening my hair will decline exponentially with the willingness of my body to continue living as each day passes ;)

I was laughing out loud at this! Have a great race!

One rider you should definitely watch out for is Orica-AIS rider Tiffany Cromwell, who's really found her cycling mojo since joining the Australian team. Here's her PoV on the race, just for us:

So the Giro Donne kicks off tomorrow from Naples and makes its way up to Bergamo over 9 days this year. It's a shame we are staying away from the high mountains we ventured into during the past two additions as it is an amazing part of the world up there but it should still be a beautiful race.

I am already into the Giro spirit as I went to the beauty salon for a fresh manicure and pedicure choosing a nice barbie pink colour for my nails. I'm looking forward to lining up as part of a strong Orica-AIS team in a fresh new outfit to keep everyone on their toes as I think this is kit change number 4 for the year.

I expect it to be a hard and aggressive race as always but this year, being a month out from the Olympics girls will be reaching their peak form and there isn't really one stand out contender for overall honours but I think a number of girls are in for a shot of the maglia rosa, but for me I'm hoping it is one of us from Orica-AIS.

I think about the only thing I dread with the Giro is 9 days of glorious race food such as gels and bars and also pasta for breakfast, lunch and dinner, at least being in Italy it is good food but 9 days straight can be a bit much for anyone. I'm really looking forward to getting it started, time trialling through Rome, riding through the hills of Tuscany and revisiting my old training roads around Varese, enjoying the atmosphere along the road and hopefully have some success along the way.

And I asked her what's in her Giro Donne survival kit:

Watch out for Cromwell - she'll be working like a dog on the front, I'm sure, and hopefully will get the chance to get away, too!

Many thanks Marianne, Miffy and Tiffany for take the time to chat!

To follow what other riders are saying about the race, I've made a Twitter list, where you'll be able to see the snappy 1-liners and the links to rider blogs. Keep an eye out also on the Specialized-lululemon site - they've already got blogs from Clara Hughes and Chloe Hosking - and Rabobank have been excellent at putting up videos from races, so watch out for their youtube - and Amber Pierce of Diadora-Pasta Zara is hoping to do live web Q&As every day on the Fuji Bikes facebook app - watch her twitter for when!

Finally, of course, keep an eye on our daily race updates - which you can always find through the women's cycling section of the site - as we'll fill the articles and comments with anything else we find! Enjoy the race!