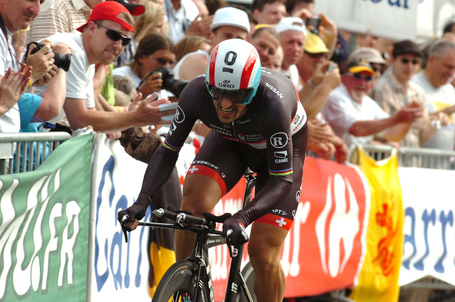 The Tour de France kickoff stage was a short prologue around the streets of Liege, in French-speaking Belgium. Omega Pharma Quick Step's Sylvain Chavanel laid down an early leading time of 7.20, which held up into the final group of overall favorites until Wiggins edged him by less than a second. World Champion Tony Martin had a flat tire, destroying his stage prospects when it looked like he might win. Martin finished 15 seconds behind then-leaderChavanel. Gorka Verdugo of Euskaltel crashed himself out of the Tour altogether.

In the final hour Tejay Van Garderen slipped into second, just three seconds off the pace. Denis Menchov, among the favorites, was just three seconds slower, a surprisingly strong start. Ryder Hesjedal rode a respectable race, level with Evans. Alejandro Valverde of Movistar and Frank Schleck of Radio Shack both lost over 30 seconds to Wiggins, putting themselves in an early hole.

Obviously Cancellara gets yellow and green. No spots given as there were no mountain points on this flat course. Actually the polka dot jersey went to retired cyclist Lucien Van Impe, a Belgian climbing hero from the 1960s. Van Garderen takes the white jersey.