FSA-DS: Goddess Is Terug! And the Women's Season Starts to Boil

Share All sharing options for: FSA-DS: Goddess Is Terug! And the Women's Season Starts to Boil 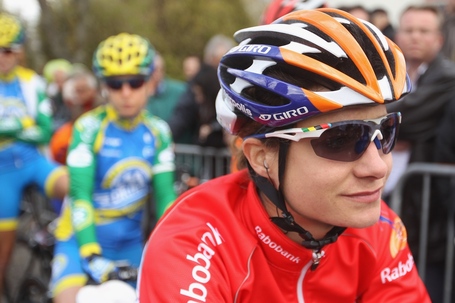 There is reason to celebrate in the world of Women's Cycling today -- well, maybe the world of women's cycling fans, at least, not so sure about the riders themselves. That's because the Golden Fox, Marianne Vos, turned some pedals today in, er, not anger, maybe relief? Yep, cycling's single most dominant rider is back in the saddle after breaking her collarbone May 25 in the Netherlands, and should resume her place atop the women's field in a reasonably short time, having been off the bike for all of ten days.

Just in time too, as far as the FSA Directeur Sportif is concerned. While the men's season is a more carefully balanced affair where points start raining from the sky in late March and don't ever really stop until November, the women's season is pretty heavily concentrated from the end of June to the middle of August. The three Grand Tours of Women's Cycling kick off June 29 (Giro Donne), July 17 (Thuringen Rundfahrt) and August 4 (La Route de France). In between the latter two are the two Olympic events (cat 2) and La Route de France rolls straight over into two more Cat 2 events in Sweden and Plouay. By the end of August we may not have settled the matter entirely, but the teams who can't keep up will be well off the back.

How's this all gonna shake out? To the flip!

We have a lot of other more qualified commenters on Women's Cycling around here than me, so take this for the superficial analysis it is, but I am happy to start the conversation.

What Will Marianne Do?

Vos is a three-peat winner at the Giro Donne, the sport's marquee event, and it was presumed she would stake her claim to glory here, then in London. With over three weeks to the start of the Giro Donne, there is time for Vos to perfect her form, assuming she hasn't really lost much. She is Marianne Vos, after all, so anywhere close to peak will put her in the conversation.

But the human body is a mysterious thing, at times, and exactly how that shoulder feels and what implications the injury has for her energy levels is hard to predict. Until she gets back to full fitness, then she hasn't done it, and with it being an Olympic year -- the biggest media platform in the sport, as well as everyone's dream -- Vos can't be expected to exhaust herself in Italy. My uneducated hunch is that she'll be good enough to carry on and do well (remember, Grand Tour placings are 20-deep), but any setbacks before the start could completely refigure her season. Thuringen and the Route de France aren't as well suited for Vos, which I assume is why she didn't ride Thuringen last year and why her last Route de France (2010) was unremarkable. But roughly one-quarter of the Earth's surface is considered Vos Territory, so if points don't happen in one place, they'll probably happen in the next.

If Not Marianne, Then Who?

Again, I will defer to the experts, but a peek at the FSA DS standings shows that Evie Stevens, Emma Johanssen, Trixi Worrack, Monia Baccaile, Judith Arndt and Annemiek Van Vleuten are the chasing group for the big prizes.

OK, you guys can help sort out predictions here. Stevens is the most important rider in the FSA DS right now, featuring on seven of the top eleven teams (ten plus a tie). The best teams saw that one coming. [I of course did not.] Those top eleven teams are only separated by 1400 points (out of 9700 or so), and 20 teams are within 2000 of current leader dumptruckfullofwomenlyawesome. It's gonna get hot starting in a few weeks. Real hot.
Photo by Michael Steel, Getty