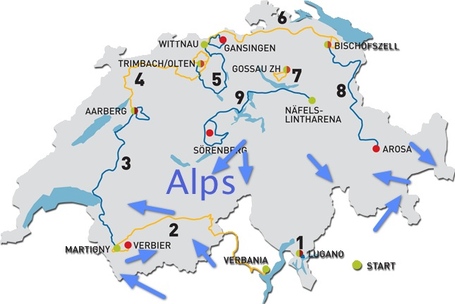 I have kindly edited the Tour de Suisse stage map to helpfully show the organizers where to find the Alps. The Swiss Alps. I've also decided to delete my original soft-soap "sell-out-to-the-man" preview and tell the truth:

It will be one of the more fun cycling weekends of the year as the Critérium du Dauphiné hits the mountains and the Tour de Suisse gets under way.

After the jump, I'll explain why

Where the hell are the Alps!

I know you are about to tell me that there are some alps - but they suck - let's take a closer look.

There is only only one Pass above 2000 metres in the entire race - Simplon Pass appears early in stage 2. And it sucks!

Google Simplonpass and look at some "every-day-joe" blogs writing about their trip-of-a-lifetime and you'll see that Simplon sucks. It is a key link between Italy and Switzerland and suffers from the three T's: Huge tunnels, fast traffic, and trucks. I want a pass that cyclotourists can enjoy after watching the TdS.

Look, I understand that it's de riguer to have a stage start in a foreign country (Italy in this case), but couldn't you have picked a better way to to come back? A train would have been a major improvement.

Anyway, for all you Simplon fan boys (and I know who you are!), good luck seeing Simplon. Between all the tunnels and it being at the start of a stage. The only high pass in the Tour de Suisse will be invisible to us, the good people of cycling. And that sucks.

Fantastic! The rich boys in Verbier have bought another stage finish.

How easy is Verbier? When it last appeared in the Tour de Suisse an unknown Canadian amateur won the stage while everyone yawned. I bet you can't even remember that stage? Hey Race guy: the steep stuff at Verbier is ABOVE the town. Not to mention all the much more interesting stuff nearby.

I feel like I am banging my head against my "Book of Interesting Swiss Alpine Passes." It Must be The UCI's Fault

Apparently there is some archaic Swiss law that every stage race in Switwerland must pass UCI headquarters in Aigle - and stage 3 will ensure compliance with that law. I tried to ask Pat the deal and instead got a 450 Sfr fine for leaning my bike on their oh-so-beautiful sign that was probably paid for by that American cyclist guy. I am fairly certain I know who got me barred from the Romandie VIP tent. Lot to learn.

Look I don't really care if a race passes Aigle or not. But at least have the decency to then turn right and cycle the Hors Categorie Col de la Croix, or even your usual wimpy Col des Mosses. But no, as usual the TdS figures that we all have to get out of Swiss Romande as fast as possible (but that's a rant for another day).

You go look at the profiles because I am damned if I am going to the trouble of uploading them. Bah, OK, here they are: stage 4, stage 5, stage 6, stage 7. Starting to understand my disappointment? There is just one category one climb and it's 100 kilometres from the finish and almost as far from the Alps.

And for mercy's sake don't get excited about a few consecutive cat 3 climbs. You may not know another dirty secret: minor races use easier climb rankings than Grand Tours. Jens and I on a tandem could cycle stages 5 and 6 and still have enough energy to put together my new IKEA book shelves (but that's another rant for another day).

"Please," I scream while waving my book of interesting Swiss Jura mountain climbs: "this is Switzerland. Where are the hills? Fabian has already won this race!"

OK, the hill on the stage 7 Time Trial looks "mildly interesting." Fair and balanced is all you'll ever get from me.

I am going crazy.

I snapped a photo of this Swiss Milk billboard the other day, and the little cyclist started talking to me.

Dude, sadly Americans stopped coming to Switzerland when your currency started collapsing a few years ago (but that's another rant).

I don't want to get into a geography debate, but yes, these - in-my-mind - "pre-alp" stages do look interesting. And a couple of mountain top finishes will always be fun. Hey Race Guy: there are a couple of typos on the stage 8, and stage 9 profiles. You put "HC" a couple of times instead of "1" - you're welcome for the help.

Look Arosa will be a beautiful "mid-altitude" finish. I might watch IF I remember the TdS has been running. Stage 9 looks pretty fun too, it would have been a good "appetizer stage." I have passed the region while driving to the real alps.

Idea! (feel free to use it): I know a few passes in the area that need to build a ski resort at the top so they can afford to host a finish.

I Am Not A Tour de Suisse Hater

No, I don't hate everything about the Tour de Suisse. In fact it has easily the best, most catchy theme song of any UCI sanctioned race. "Eneco, I Love You" never floated my boat. "I Love Paris and Nice in Spring Time" seems too derivative. The TdS song could easily win Eurosvision if the damn Germans and Austrains would vote in block with Switzerland (but that's a special eurovision rant).

Look, I am a solutions guy. And I know you all need your "Switzerland fix."

So I promise you that you will enjoy this genuine Swiss video more than the sucky 2012 Tour de Suisse route.