Olympic Dreams - the Dutch just got serious (and other Olympic news)

Share All sharing options for: Olympic Dreams - the Dutch just got serious (and other Olympic news)

I've been telling you about some of the various riders who are have been attempting to get spots riding in the Olympic women's Road Race and ITT next month, and since my last installment, we've seen not only the confirmation of which nations get to take how many riders, but we've also had our first team announcements. South Africa told us they'll be taking Ashleigh Moolman, Jo Van De Winkel and Robyn de Groot, but before that, the very first nation to lay their cards of the table were the Dutch, with a team to inspire respect, and maybe even a bit of fear - no wonder they were so confident!

I'll tell you more about the riders who'll be representing the Netherlands on the roads below the jump - and because it must have been a particularly hard choice, I'll tell you about the riders who have had to be left behind.... Really, choosing four out of the huge Dutch talent pool must have been crazy-hard - they have five riders in the top 20 of the current UCI rankings, for goodness' sake - and their 5th-8th best riders would make a more formidable team than most countries' 1-4! But there was never any choice about their team leader.... the one and only Marianne Vos! 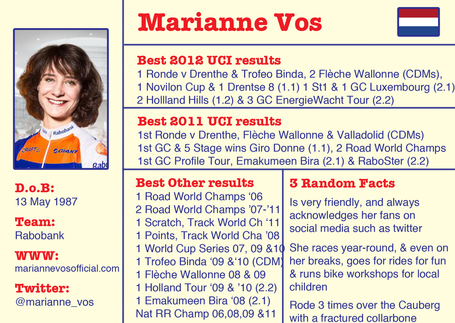 At just 25, Vos is already one of the all-time greats of cycling, with World Championship titles across road, track and cyclocross, and talent that's unstoppable over sprints, cobbles and mountains. As Ina-Yoko Teutenberg told us, "Everything is Vos territory!". But it's not just her extraordinary palmarés that make Vos special - it's that she really, really loves cycling - and cycling loves her back.

We all know about how rivalries can explode in this sport, but Vos is a rider who other riders just seem to like. In a sport (on the men's even more than the women's side) where people are not shy about making their feelings known, Vos seems to be respected, liked, acknowledged as a really nice person, on and off the bike. It's hard not to let the fangirling spiral completely out of control, but she's a rider it's a pleasure to be a fan of - you have to like a rider who tweets her collarbone x-rays, calls themselves a "full-time hobby cyclist", gives interviews to fan-sites like Podium Café (read her interview with our own Jen See from last summer!) and continually says she's happy just to ride! She even apologised to our own Albertina on twitter, last year, for not getting her enough points in the Virtual Directeur Sportif game (before winning the Giro Donne & causing all non-Vos DSs to cry)

But even Vos doesn't have it all her own way. She won her fifth Cyclocross World Championship title earlier this year - but she lost out on her chance to compete on the Olympic track to Kirsten Wild, losing a head-to-head competition for the chance to race the omnium. She made up for it by focusing everything on the road - winning the first two rounds of the Road World Cup in fine style, but lost her Flèche Wallonne title to Evelyn Stevens in final metres of the Mur de Huy. Then she was unable to race one of the few big races she hasn't already won, the Ronde van Vlaanderen, due to 'flu - and worse still, had to crash to avoid an errant race motorbike in the Holland Hills Classic, fracturing her collarbone (this being Vos, she still finished the race, climbing the Cauberg three times before coming second behind her team-mate, Annemiek van Vleuten!)

It's been an uncharacteristic run of bad luck - and ever since the Giro Donne last year, Vos has been looking a lot skinnier and more fragile than previously. Hopefully the collarbone will enable her to take a good, long break, and she'll come back stronger than ever. She'll certainly start the Olympics - and the Worlds - as the one to beat, and whatever happens, there'll be a huge fanbase cheering her on, who'll support her however she does!

Vos isn't the only Dutch rider who could win. One of the many fun things about watching her race over these last few years has been how she's ridden with another formidable rider - Annemiek van Vleuten. 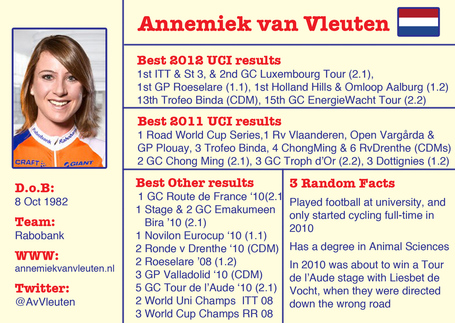 Having two such big talents on the team could be hard - but in Nederland Bloeit, and now in Rabobank, these two have just complemented each other. I say this a lot, but I really feel for the other riders - in a group with Vos and Van Vleuten, what do you do? If AvV jumps, and you chase her, you're towing Vos to the line, where she can sprint past you - and if you don't chase, Van Vleuten will win - and that's just one scenario!

Van Vleuten, who came to cycling through an interesting route (which you can read more about in my interview with her last year!) has taken to it like a duck to water. It's not always been easy, and this year she started her season later than usual, after another batch of surgery to remove scar tissue from her veins, but she's continuing to shine - could she be the one to win the Olympic gold? And she's not the only non-Vos contender in the Dutch team, either! 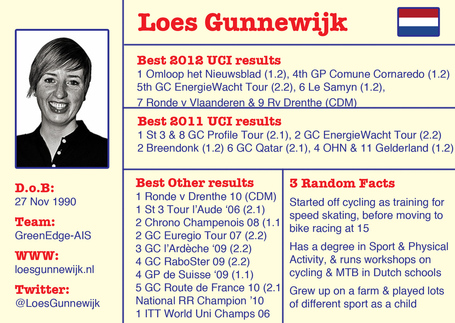 Loes Gunnewijk is another rider who teamed beautifully with Vos and Van Vleuten. She's particularly good at the suicide breaks, and killer attacks (especially from groups) in the last few kilometres - tactically she's so much fun, and her palmarés glow as a result. This year she's moved to GreenEdge-AIS, where she headed their Classics campaign and teams as effectively with Judith Arndt as she used to with her Dutch team-mates on Nederland Bloeit

Gunnewijk is just one of the many riders who came to cycling as training for speed-skating - although in the sports-crazy Gunnewijk's case, she combined it with roller-blading and running, until she realised she was faster on two wheels. This is a typically Dutch way into the sport, and it's also the one that brought us the final rider on the Olympic road team.... 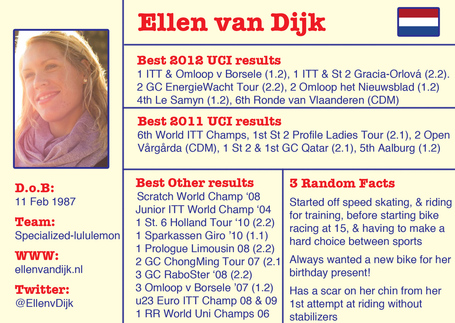 Ellen van Dijk, is going to be having a big Olympics. She has been part of the Team Pursuit team on the track, and could well be competing in the velodrome as well as on the roads, where she'll also be a huge threat in the ITT. Van Dijk is such a strong rider, who's been doing stellar work on HTC-Highroad and it's new incarnation, Specialized-lululemon, leading out Ina-Yoko Teutenberg, devastating the peloton for any of her team-mates, and attacking to killer effect herself. She's a former Junior World Champion in the ITT, and if it wasn't for the fact she was in the same age-band as Vos, could have been a junior World Champ on the road too - but she always works so hard and gives it everything, so I'll look forward to see what she can achieve this summer.

You may be wondering at this point "hang on, what about Kirsten Wild?". Wild has had a great year, and is sitting 10th in the UCI rankings (the third highest Dutch rider) - but she has other things on her mind, for the Olympics. her big goal is the Olympic omnium, the track event made up of 6 different races - flying lap, 500m, 3km Individual Pursuit, and the Scratch, Points and Elimination bunch races.

Wild wasn't able to compete in the first few times the omnium was raced in the Track Worlds, as a disagreement between her trade team, Cervélo, and the Dutch National Team over which bike she rode hit an impasse, resulting in no track at all (read more about that in my interview with her from 2010). But since moving to AA Drink-Leontien.nl, she's been combining road and track to great effect, coming 3rd in the 2011 Track World Champs, and 2nd in the 2011 Beijing and Manchester rounds of the Track World Cup. She's a great 6-day racer, especially strong in the bunch races, so although she's not on the road, fans of the red-headed sprint star should watch out for her on the London velodrome. 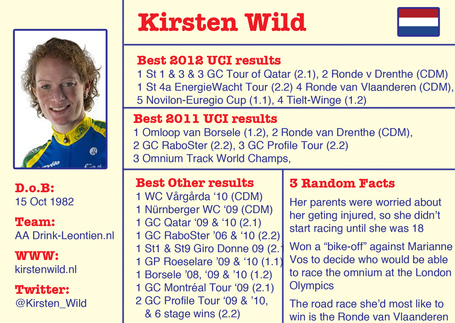 So who else doesn't get the chance to go? Well, first up, the reserve rider for the road team, Adrie Visser. Visser has had a great couple of years working hard on HTC-Highroad, as part of the sprint train and as an escape artist, but this year she's joined Skil-Argos, where she leads the team in the flat races and the Classics, and seems to be thriving. 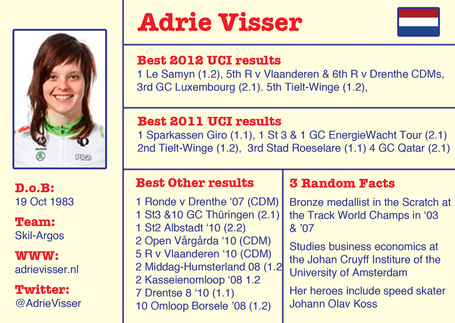 The other riders who will have only just have missed the cut of the Dutch team - and who would probably be riding in London, if they came from any other country, are Iris Slappendel, Chantal Blaak and Martine Bras. I feel especially sorry for Bras, who was riding superbly, with an excellent record in World Cups and the Classics, until a crash in training in March caused her big problems, and she's only just coming back into form. It was great to see Bras come fifth in the first stage of the Emakumeen Bira today - here's hoping she's back to her full brilliance very soon - and that we see these three all over the coming races, and on the Valkenburg roads at the World Championships! 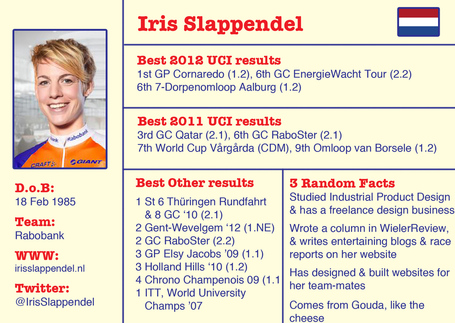 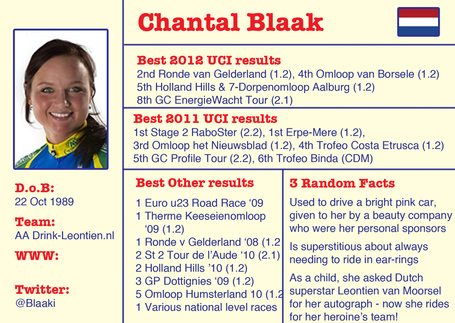 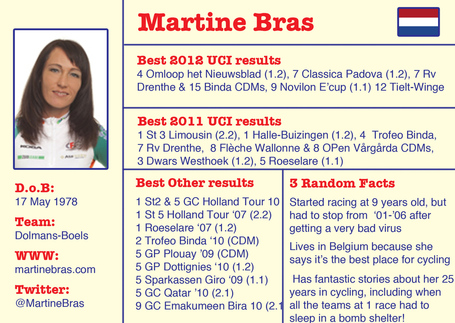 In other Olympic news, Canada have just announced their long list.... later than most nations, but that's another hard decision!

For more on these riders, we're lucky that the Dutch are some of the most connected to internet of any nation, so there are many ways to connect

For more on the Olympic Road Race and the rules behind team numbers, see my earlier article - and for information on the riders who'll be vying for places representing Australia, the USA, Great Britain and Italy, follow the links (but bear in mind the palmarés have all moved on since then!)