After a sprint stage and a 7km time trial, Stage 3 was always going to be the first stage that really made an impact on the GC. The route looped through hilly Tuscany from Vernio to Castiglione dei Pepoli, and with the first GPM, Montepiano, starting at around 12km, and then a second climb, Passo della Futa, starting with 30km to go, before a descent, little climb and the stage end on an uphill finish, it was definitely a route to show us who to watch for General Classification glory. And it didn't disappoint! You can see video below the jump! 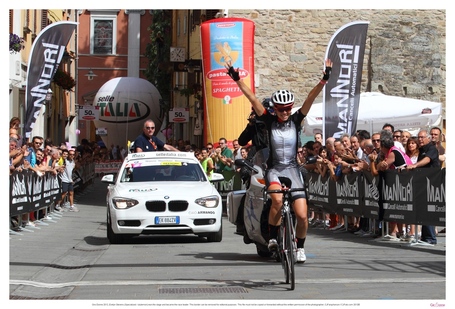 It was a hot day out there - 45ºC - and the attacks started thick and fast, although no one could get away in the first 20km. Shelley Olds got in some extra sprint practice, winning the first intermediate sprint, ahead of the race leader, Marianne Vos (Rabobank) and her AA Drink-Leontien.nl team-mate, Lizzie Armitstead - and then halfway up the first climb of the day, Linda Villumsen of Orica-AIS attacked, making it to the top first.

Villumsen is a formidable rider, who's twice been on the podium for the ITT World Championships, and is always aggressive, and chasing her split the peloton immediately, leaving 40 riders in the front group. Monia Baccaille (MCipollini-Giambenini) and Katarzyna Sosna (Vaiano Tepso) jumped from the front and chased - and for the next 40 or so kilometres, that was how the race went - Villumsen alone, gaining up to four minutes on the chase at one point, and Baccaille and Sosna in between her and the the group. However, as they approached the big climb, Rabobank and Hitec Products-Mistral Homes started lining up on the front, the pace shot up and Villumsen's lead, started to fall fast.

Baccaille and Sosna were swept up, and then it was the turn of the mountain-goats - Emma Pooley (AA Drink-Leontien.nl) and Evelyn Stevens (Specialized-lululemon) attacking hard, catching Vilumsen 10km before the top of the climb, and passing her to make this a battle of the climbers. Both riders are Giro Donne experts - Pooley having finished second in the GC with a stage win in 2011, and Stevens winning a stage in 2010 - and the only rider who could catch them was 2008's winner Fabiana Luperini (Faren-Honda). The three raced to the top of the climb together, Pooley crossing the GPM point first, to cement her Queen of the Mountains lead, and it may have looked like it would only be down to these three riders - except behind them, Marianne Vos had broken away and was doing all she could to defend her maglia rosa.

Vos is one of the very best descenders, male or female, and although she couldn't catch the lead trio on the climb, she pulled out all the stops on the 6km descent, tucking herself into crazy positions to get every aerodynamic advantage. Luperini attacked on the little climb at 10km to go, but couldn't escape Pooley and Stevens - and then despite all the trio's efforts, Vos' daredevil antics brought her to a few bike-lengths of the front group!

There was no way the trio were going to allow Vos to join them, if they could help it, and Stevens took the lead in turning up the gas, leaving Vos suffering behind her, seeing them pull away out of her reach - and then at 2.5km to go, Stevens attacked again, dropping Pooley and Luperini! There was pain all over her face, but she rode through the suffering, pulling out her advantage to come in solo, winning her second Giro Donne stage.

Behind her, but her huge efforts to catch the lead group had been too much - the race for second came down to Fabiana Luperini out-sprinting Pooley, with some angry gestures at the Brit as they crossed the line (we can't work out why, as Pooley had worked hard in all the video we've seen). Vos came in 4th, 31 seconds behind Stevens - enough for Stevens to take the maglia rosa, as well as the win! Stevens was covered in huge grins after the stage (I liked the clip of her jumping up and down and doing a happy dance after her win!), a very happy winner. There's a great audio interview with her after the stage, via Tuttobici, where you can hear the smile in her voice.

And here's a post-stage video interview:

The efforts of trying to keep the GC gaps down as little as possible meant that the chase was hugely fragmented, and riders crossed the line alone and in small groups. Big credit especially to Hitec's Elisa Longo Borghini, who beat compatriot and former World Champion, Tatiana Guderzo, over the line for 6th, giving her the Best Young Rider's jersey. Pooley took the QoM, and Vos the Points

So the GC has been given a good shake-up, and tomorrow Evie Stevens will start pretty in pink, although whether she'll stay in it is another matter! Stage 4 is shorter, at only 98km, and the big issue of the day is the climb - 700m over 11km, at an average of 6.4%. The climb should suit Stevens and Pooley, not to mention Häusler, Luperini, Arndt, Moolman and Guderzo - but once again, the descent all the way down should favour Vos - and then the final 3km are another uphill finish at around 6%. See Monty's preview for more information!

See the Specialized-lululemon website for a picture of a very happy Stevens on the podium - and the Giro Donne's facebook album for a jersey podium pic. There's a race report (with photos to follow) on WomensCycling.net, and another race report on Cicloweb - and of course, I'll edit in video as we find it, and lots more will be added to the comments! And if you want to find out more about Stevens, check out Jen's interviews with her, from April 2011 and May this year.