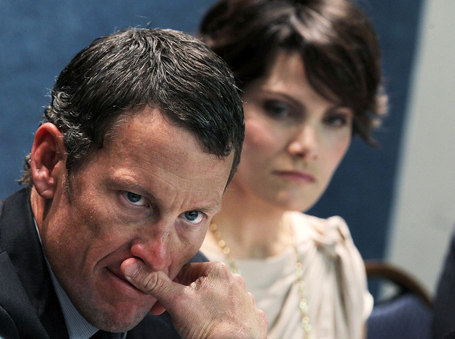 In the latest move in the dance between Lance Armstrong and the US Anti-Doping Agency (USADA), Armstrong's legal team filed an injunction and temporary restraining order against the agency in an attempt to cease - at least temporarily - the investigation into charges Armstrong systematically doped during his time as a rider on the US Postal team. The 80-page document was filed Monday morning and, with remarkable speed, was rejected by US District Judge Sam Sparks mere hours later. (Here is the official ruling)

According to Sparks, the appeal was dismissed on largely procedural grounds. The lengthy document, he said, failed to comply with Federal Rule of Civil Procedure guidelines requiring a "short and plain statement of detailed facts" and instead was a "mechanical recital of boilerplate allegations, nor as is more relevant here, a lengthy and bitter polemic against the named defendants." Sparks further rebuked Armstrong and his legal team, stating "This Court is not inclined to indulge Armstrong's desire for publicity, self-aggrandizement, or vilification of Defendants, by sifting through eighty mostly unnecessary pages in search of the few kernels of factual material relevant to his claims." Armstrong was then invited to re-file his appeal in more succinct fashion in the next 20 days.

Armstrong is not alone in his actions. Numerous people have challenged USADA proceedings on grounds of their purported unconstitutionality. The standards for how evidence is revealed differ, and arbitration panels are no jury trial. This, some athletes have contended, violates their constitutional guarantees of due process.

The prevailing opinion of outside legal experts seems to be that Armstrong's attempts to forestall the investigation are headed down the same path. All athletes who purchase a license to race from USA Cycling at any level agree to both know and abide by the rules and procedures set forth by USADA. And as for the arguments that the Armstrong team is making? Many rely on a presumption of what would happen in a hearing, not on actual events that have occurred. One argument made by Armstrong's lawyers is that cross-examination of witnesses would not be allowed. Another is that refusing to share all of the evidence collected against Armstrong - especially the names of the 10 former teammates who have supposedly testified against him - violates due process. If due process was violated in any fashion by the arbitration board hearings, only then would Armstrong have a case.

However, some experts believe the arguments made by Armstrong's lawyers are essentially correct. Brian Alexander at Outside Magazine argues that the murky rules regarding the contract between the US Olympic Committee and USADA have led to mission creep. USADA is now in a legal grey area, and perhaps that is what Armstrong truly intends to take aim at.

In January, Lance Armstrong indicated that he would not fight any case brought against him by USADA. He stood aloof, distancing himself from the supposed witch hunt that was playing out. But in the months since, he has increasingly targeted those involved in the investigation of his time on the US Postal team. In June, Armstrong's legal team sent a scathing letter to the USADA review board, urging it to drop a case against Armstrong that was "long on stale allegations disproved long ago and short of evidence." Now, we have the restraining order and injunction filed yesterday.

One wonders if Armstrong realizes he is in an end game. The USADA deadline to decide to either confess to his charges or face an arbitration panel hearing is Friday. Armstrong's legal team succeeded in pushing back the deadline five days already and further delay is improbable. From the standpoint of USADA, the agency is unlikely to bring a case before an arbitration panel that it is not sure it can win. Furthermore, three of the other defendants in the case against Armstrong - US Postal team doctor Garcia del Moral, team trainer Jose Martí, and consulting doctor Michele Ferrari - were handed lifetime bans today by USADA. It seems likely that the three decided not to contest the charges against them, which is perhaps indicative of the strength of the evidence USADA will bring to bear against Armstrong. If the case proceeds, things look bleak for Armstrong.

The outlandish length and content of the appeal to stop the USADA proceedings seem directed more towards raising the public profile of the case rather than a purely legal attempt to halt the proceedings. Is Armstrong stuck in a spiral of increasingly vitriolic attacks on those who seek to prosecute him that is impossible to reverse?

If this is a calculated strategy to publicly wear down USADA, it has yet to achieve its goal and is ever more unlikely to do so. Armstrong's recent actions, including his letter to the USADA review board and this most recent legal action, may rally the base of ardent supporters, but it is unlikely to do more than intensify their feelings. Undecided individuals are unlikely to pick up the torch to come to his defense as the case against him grows stronger. If the goal was to publicly discredit USADA so any verdict has a negligible effect on his public image, this too seems doomed to fail.

However, if this is really the first skirmish in an attempt to undermine the basis of USADA authority, we could see a far more protracted legal battle than we expect.