Share All sharing options for: FSA Directeur Sportif: One Door Closes, Another Opens 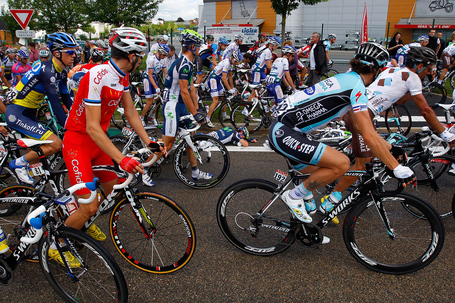 Crashes are a big story every July. Because they hurt and humans are basically empathetic creatures, most of the time (?). Or if not, because crashes shape the outcome of the Tour de France, almost without fail. And in any case, because

a great many of us have an entire cycling season's worth of emotions invested into the big races and the riders we expect to do well in them. Never is this more true than at the Tour, because the Tour is the biggest thing, and if your guy is expected to win the Tour, chances are you paid at least 20 points for him in the FSA Directeur Sportif competition.

[Newcomers: the Podium Cafe runs a year-long cycling fantasy game, sponsored by FSA, a/k/a Full Speed Ahead, makers of some sweet high-end components and wheels, among other products. The game runs from about February 1 to the last race of the road season in mid-October. If this is news to you, definitely join us in early 2013.]

So yeah, crashes. They can change the outlook of an FSA DS player in a heartbeat. For more on how, let's go to the flip and examine the Twelve Stages of FSA Directeur Sportif Grief.

Your guy gets caught up in a crash, and he's not getting up. He cost you 22 points, he held back from trying to win races in April and May, and even guarded his form in June so that his peak would occur in the Tour just when he needed it most. Now he's on the ground holding his shoulder, his teammates are standing around, and it doesn't look good. Here's what happens to you:

Rinse. Lather. Repeat. But here's the thing: very few FSA DS teams employing a Tour strategy* are lucky enough if half of their guys make it to Paris and reap the anticipated rewards along the way. Who gets all their guys through unscathed? True, if you spent too heavily on a yellow jersey contender who goes kaput in the Tour, it may be impossible to recover from the missed points. But if you lose a sprinter or a secondary threat to win, your FSA DS team can survive... even thrive, at the Tour.

[*Oh, and if you think a Tour strategy is risky, given the crashes, ask the owners of Cancellara or Gilbert about the risks inherent in a classics strategy.]

How can this attrition be a good thing? Because opportunity at the Tour is a zero-sum game, one guy's door closing is another's opening. The Tour may not produce a lot of surprise podium finishes, but every year there are unexpected names on the exclusive rolls of the Tour de France top 10. Even beyond that, the scoring system gives bushels of points to the top, er, 14 or so. [I will concede that scoring 15 points for finishing 20th is a mere trifle.] In other words, every time one of the captains goes down, somebody's lieutenant starts looking more and more like a bargain.

Take the 2011 Tour. Among the GC hopes missing in Paris were Robert Gesink (finished but hurt), Levi Leipheimer, Alexandre Vinokourov, Bradley Wiggins, Chris Horner and Jani Brajkovic. In their place?

In 2010, the bargains were just as plentiful. Jurgen Van Den Broeck finished fifth, confirming his almost-forgotten promise. Ryder Hesjedal was sixth, Chris Horner was ninth, Ruben Plaza was 11th. I don't have their salaries in front of me so can only assume these guys were bargains. And they owe at least a part of their final positions to first week crashes that took out VandeVelde, Armstrong and most notably Frank Schleck.

This year we've lost Sammy Sanchez, the better part of Robert Gesink and Levi Leipheimer (combination of problems), Ryder Hesjedal, and Tom Danielson, among others. Among those looking to cash in are:

One door closes, another opens. Cycling is a zero-sum game. As long as you win, everyone else loses.
Photo by Doug Pensinger, Getty Images Sport